“post is named after Mont Blanc granite topo series cool way to describe sectors with a hastag. #agranitemust is used describing the climbing on the Pilier Rouge de Blaitiere”

This summer in Chamonix I teamed up with a German climber Till. He has a long background in rock climbing and I’m coming more from a alpine climbing side, so we thought that would make a good team. Our eyes were set to the three of the biggest summer routes in the Mont Blanc massif. For the days off we had planned three shorther, but stellar granite routes here and there. Weather proved to be the most unsettled I’ve seen during the four weeks we had. Constant high winds, thunderstorms etc. It was so unpredictable and strange that we never had a two days of good weather in a row. Of course mountains are also super dry at the moment, which definitely makes you to stay away from majority of the routes on the list.

Big alpine stuff being out of the question we went for the routes lower down. Three “must do” routes for a climber searching the diamonds of granite crack climbing: “Fidel Fiasco”, “Sale Athée” and “État de Choc”.

Here is story from the routes with little info in between! 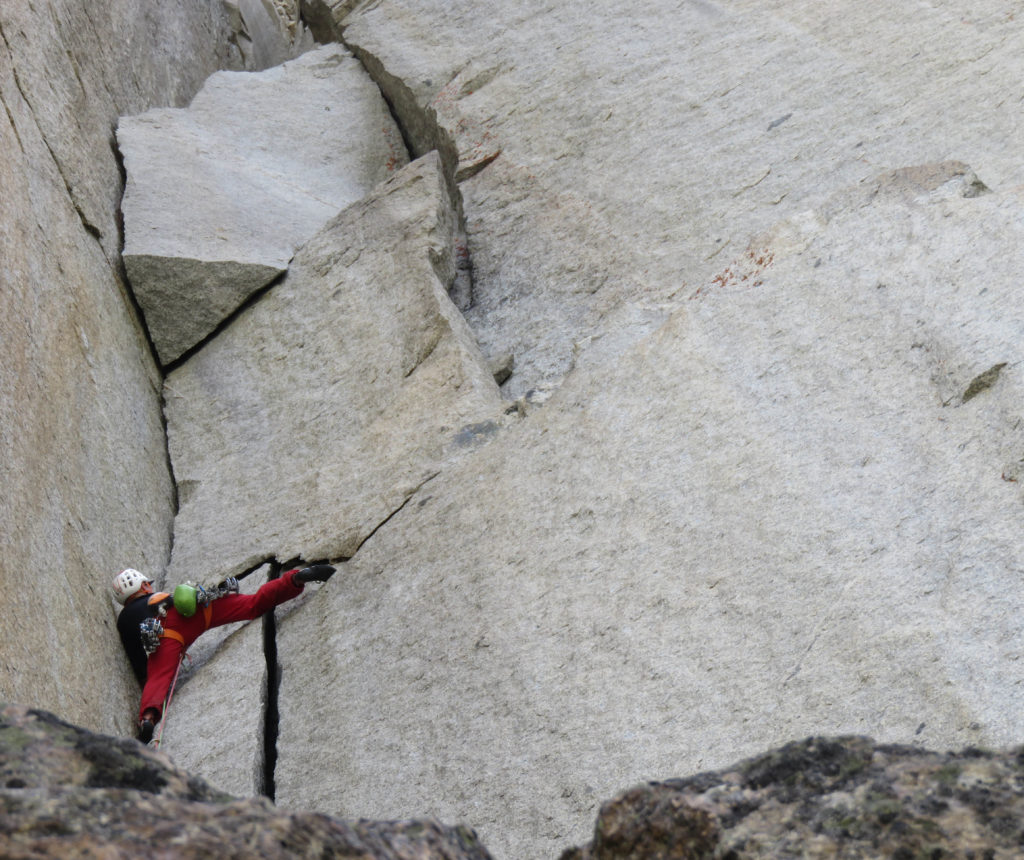 Mr. Piola and his wild 80’s slab gradings haunt many of the climbers in the massif. I probably help to keep up this legend with writing this, despite thinking a bit difirently. For example asking about the Fidel Fiasco from teams who have done it, everyone seems to wonder how hard it is for the grade, including some of the leading climbers in the world.

In my opinion the route is not hard for the grade or run-out at all if you know how to climb. People coming from the world of overhanging, qym style jug pulling where you need just power and nothing else, might feel technical friction climbing hard. Come out from the caves! Till, a friend of Spain pain caves were able do the route withouth problems. PS. A route called “Echec et Marx” proved that Piola slabs can be hard… 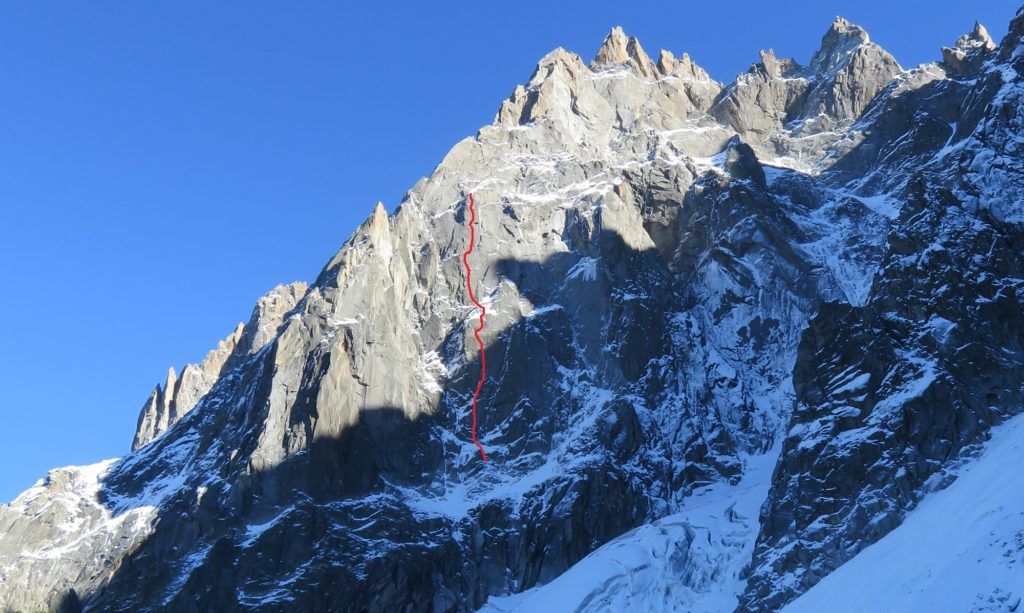 Fidel Fiasco on the Grey Pillar.

Well, to the route then. It follows a genius line of cracks and slabs on the grey pillar of the Blaitiere. Approach is a bit more than an hour from a Plan d’Aiguille and at least this year you don’t need other than sneakers for the feet. Walking pole might come handy though.

After passing the mandatory scree ledges at the start I started leading the first proper (6b) pitch. Friction was good and it wasn’t too cold which might be the case there often. West face can feel super cold at times. Pick a warm day!

Without describing every pitch I just say that climbing is superb until the last three pitches. Then it got more unpleasant in my mind with a hanging belay and a bit dirty/wet crack.

We topped the route with harder finger crack variation and abbed down to catch a clock five lift back down to valley. Especially Till felt excited that everything went on-sight. 😉

PS. Buy a new Mont Blanc granite Volmume 2 for the best topo. It covers the whole Chamonix side of the Aiguilles. 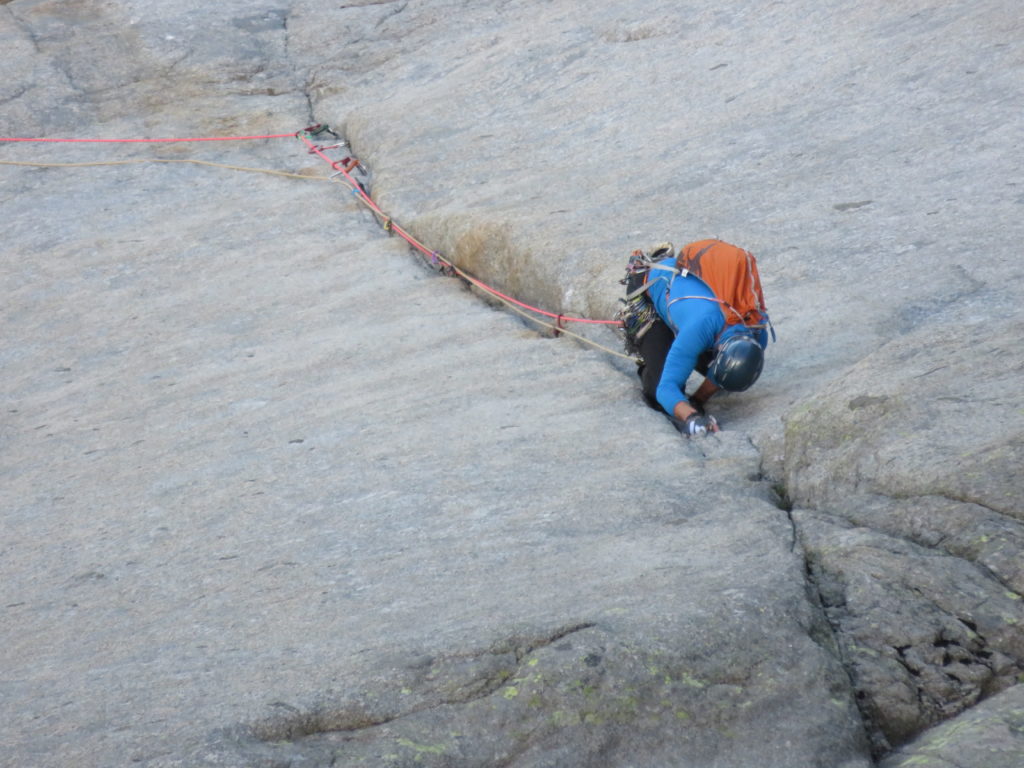 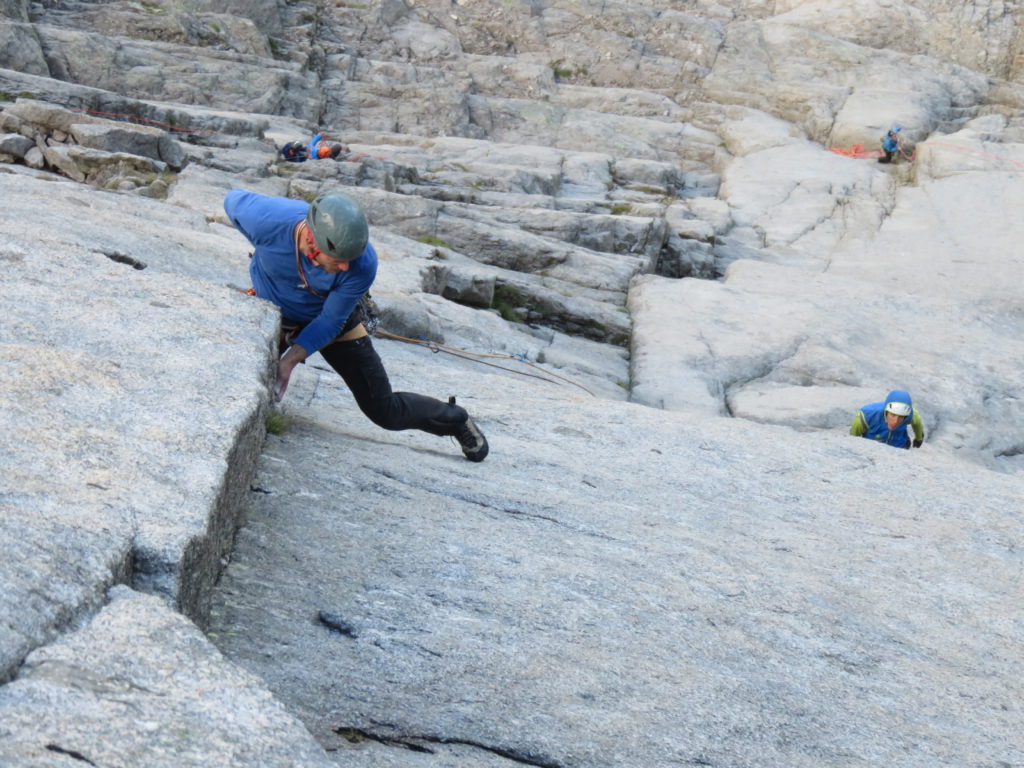 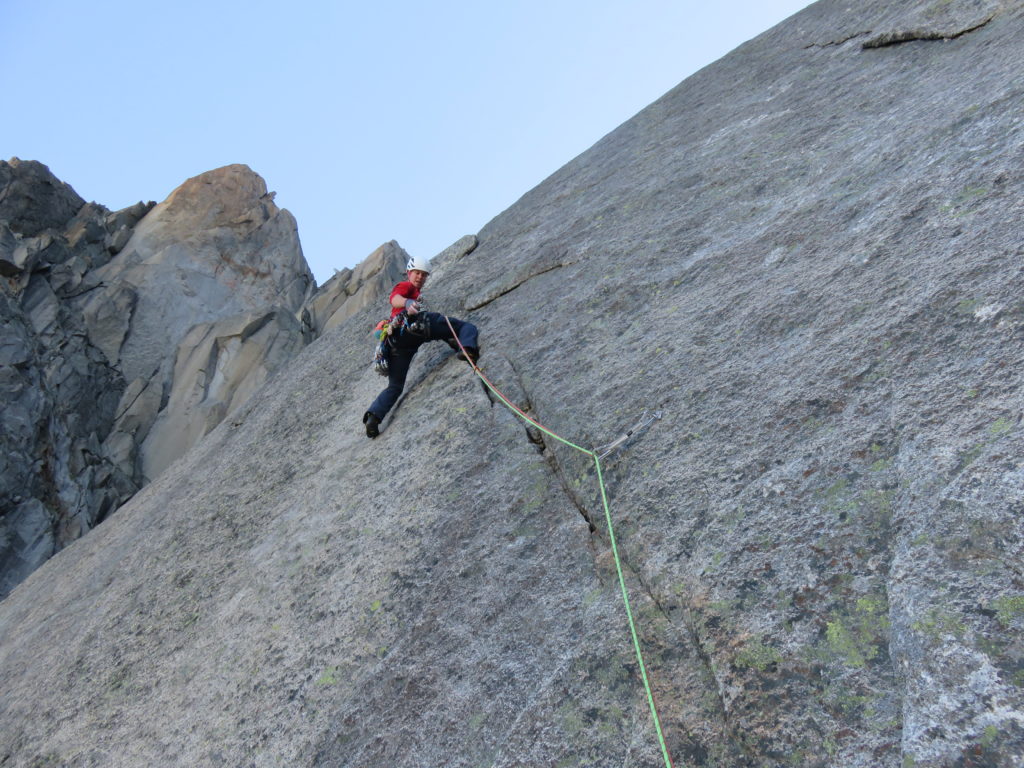 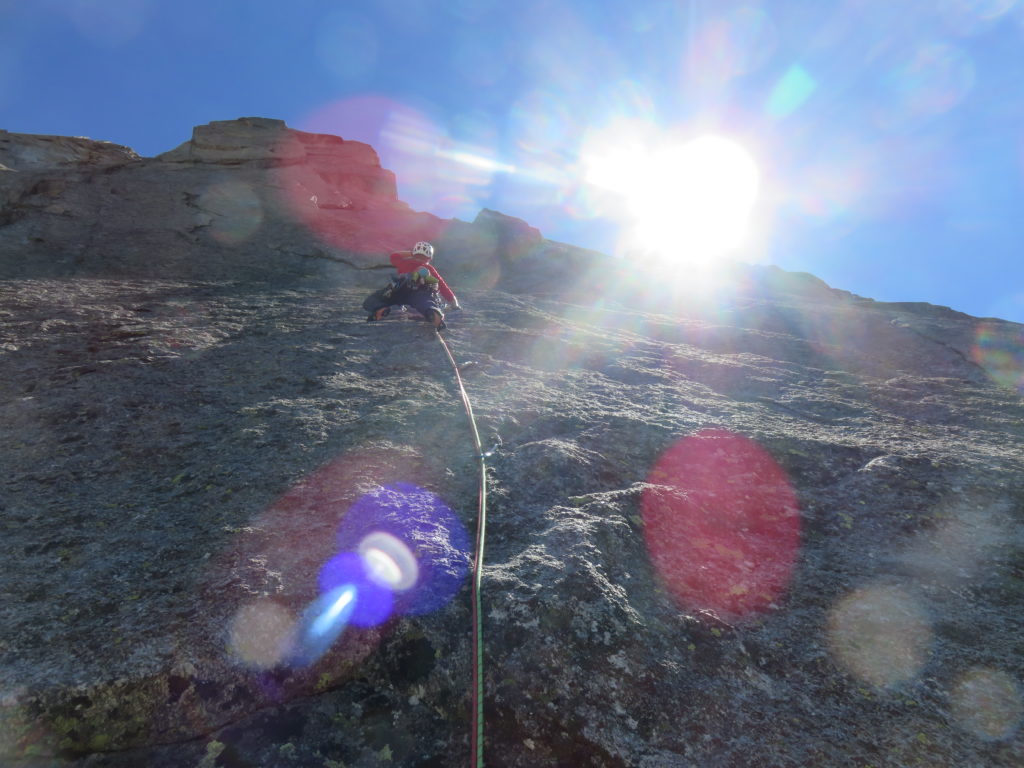 Till cat-walking on the 6c slab. 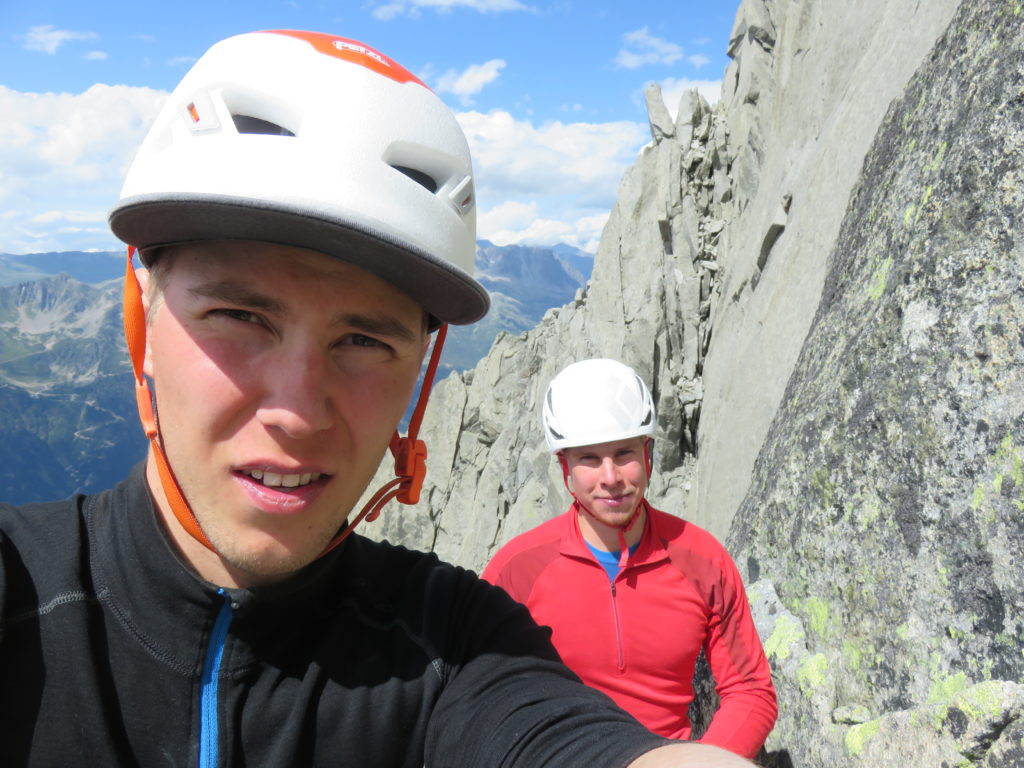 Summit of the Grey Pillar. 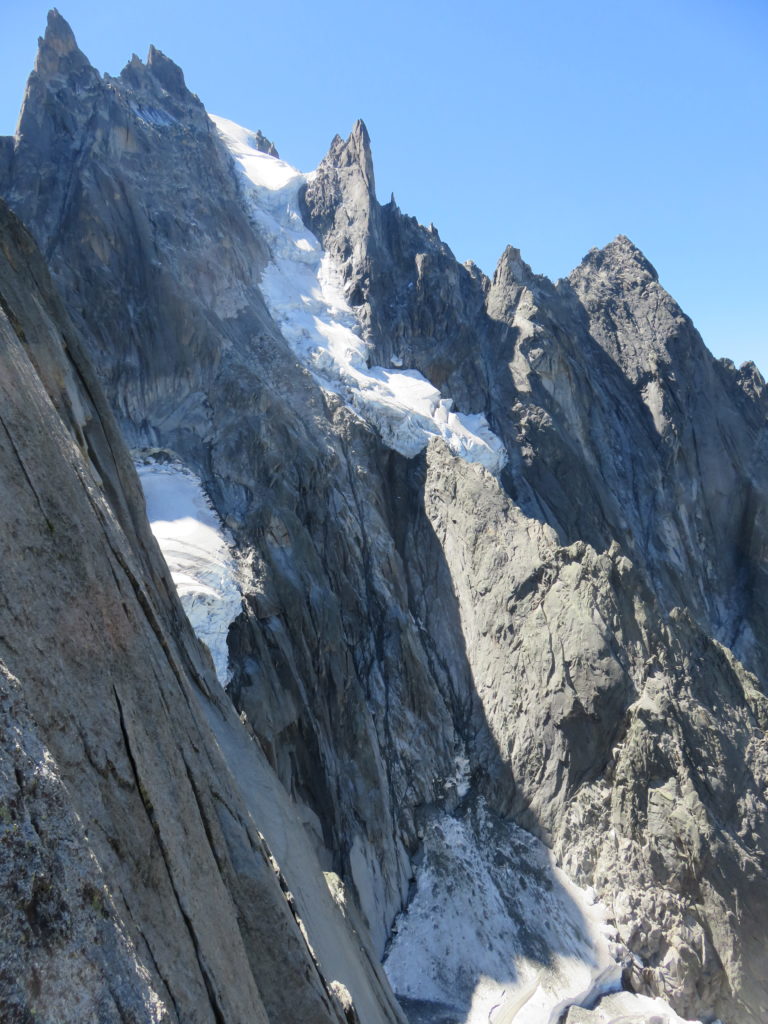 Petit Clocher du Portalet is said to be one of the finest walls in the massif with it’s off widths, overhanging finger cracks and Yosemite style climbing. The face itself is just a bit more than 200m high, but climbing is good! We wanted to go to have an shock treatment on the wild État de Choc. Windy conditions on the high peaks offered us a perfect window to visit this Swiss paradise. 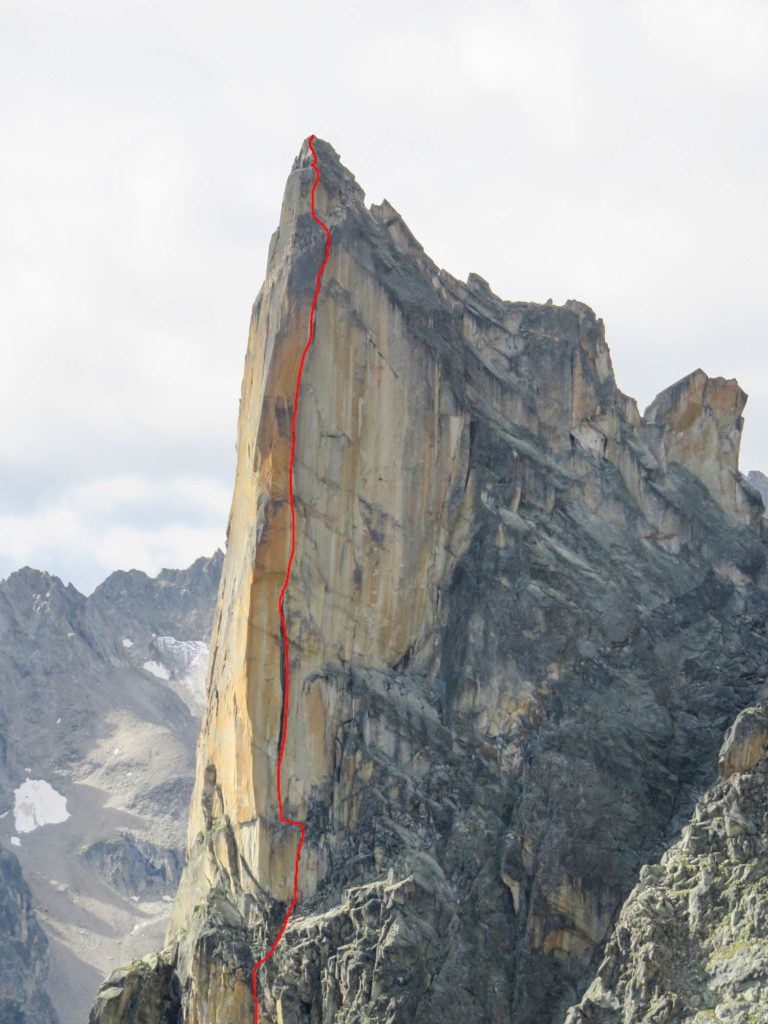 Early morning drive to Champex, first lift of the morning (La Breya) and scenic 2 hour walk to the base of the face started the day. Crossing two couloirs before the face has a stone fall danger, so be quick. There has been a big rock fall this summer, so boulders can be still unstable.

Steep face loomed above when we did two ledgy approach pitches. Third one kicked the day in fire then: lazer cut granite with knee drops. Slippery feet on that pitch due to slick granite.

We left our pack under the pitch 4 and headed to the deep and steep dihedral which led to the base of the famous off width. Till got the lead and off he went. Battling up the wide crack wasn’t actually that tricky until the very last moves.

I led pitch 6 of perfect jams and build an hanging belay under the obvious roof. There would have been a bolt belay behind the corner on the right, but didn’t know that. Till traversed the roof after taking a smashing whipper on the first deadpoint try. Moves were definitely tricky and I think we kind of did diffirent variation.

I went for the last hard pitch and found nice moves in the end. Crack climbing turned to a full on sport fest. Very nice!

Short grade 4 finished the route. I was once again happy that the whole route went on-sight/flash. We abbed the Ave Ceasar and returned back to the bivy place.

Adventurous route on jammed blocks and flakes. Steep and physical climbing. Before you go, learn to jam! 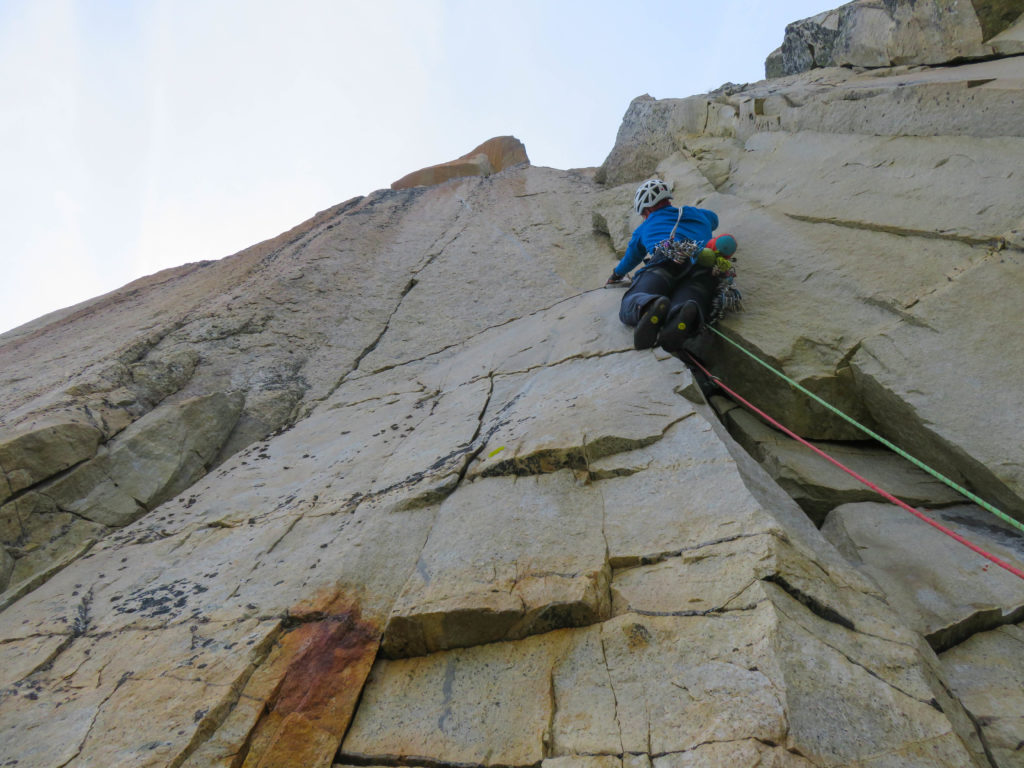 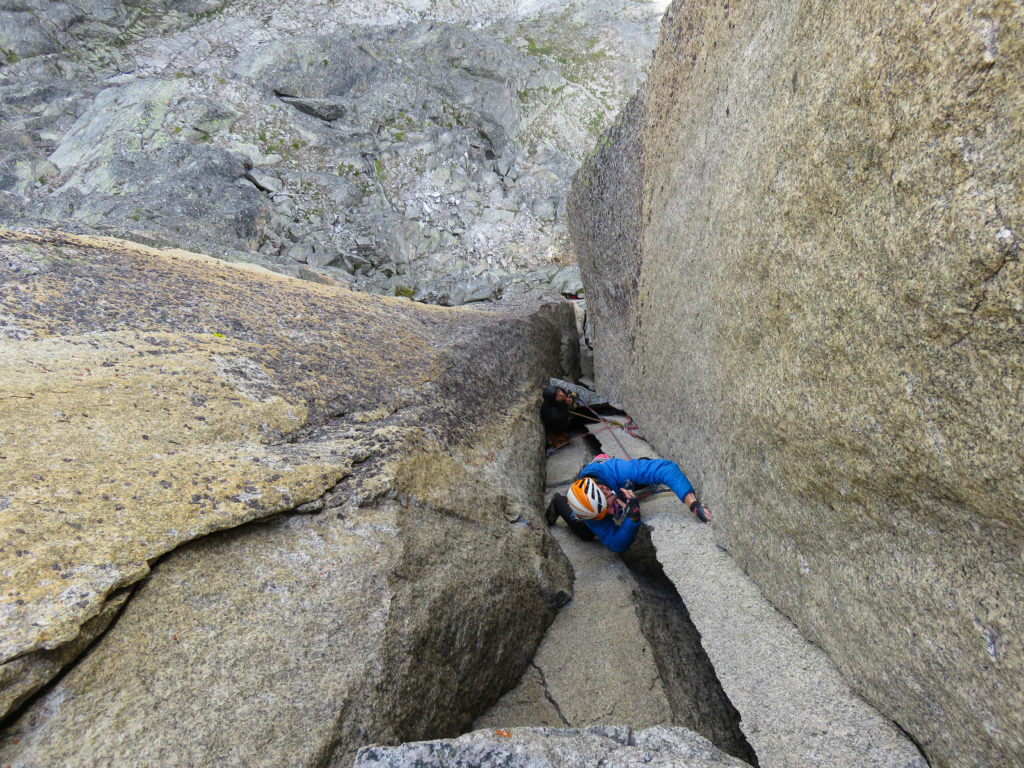 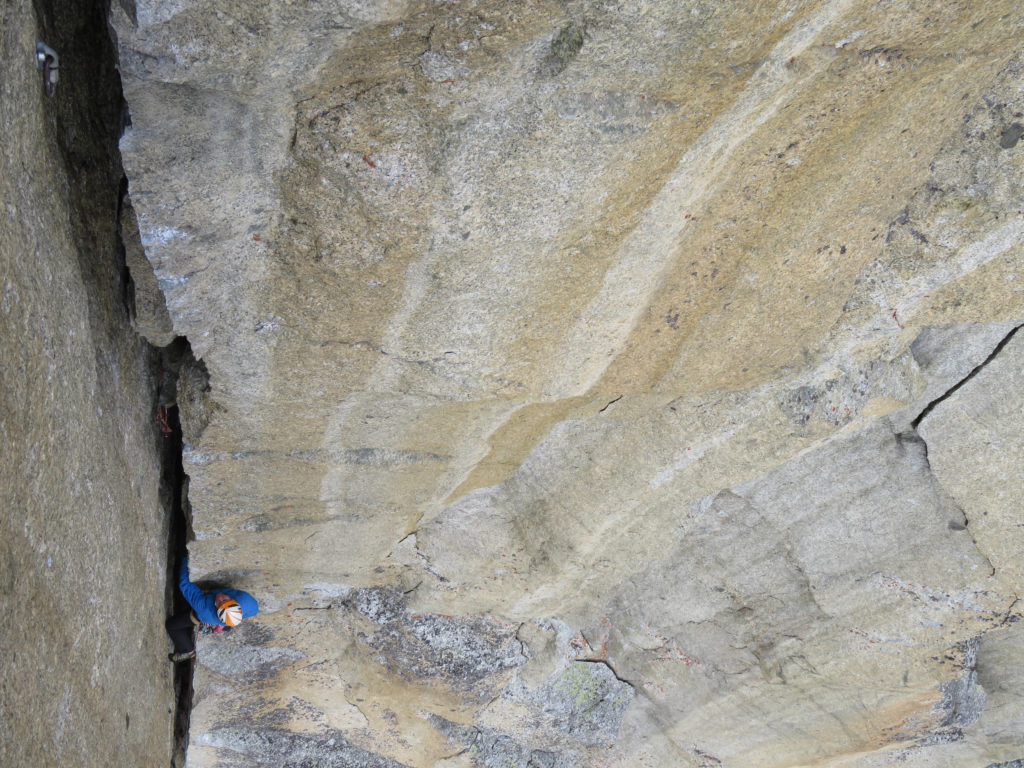 Tim gunning the monster crack on P5 (7a). 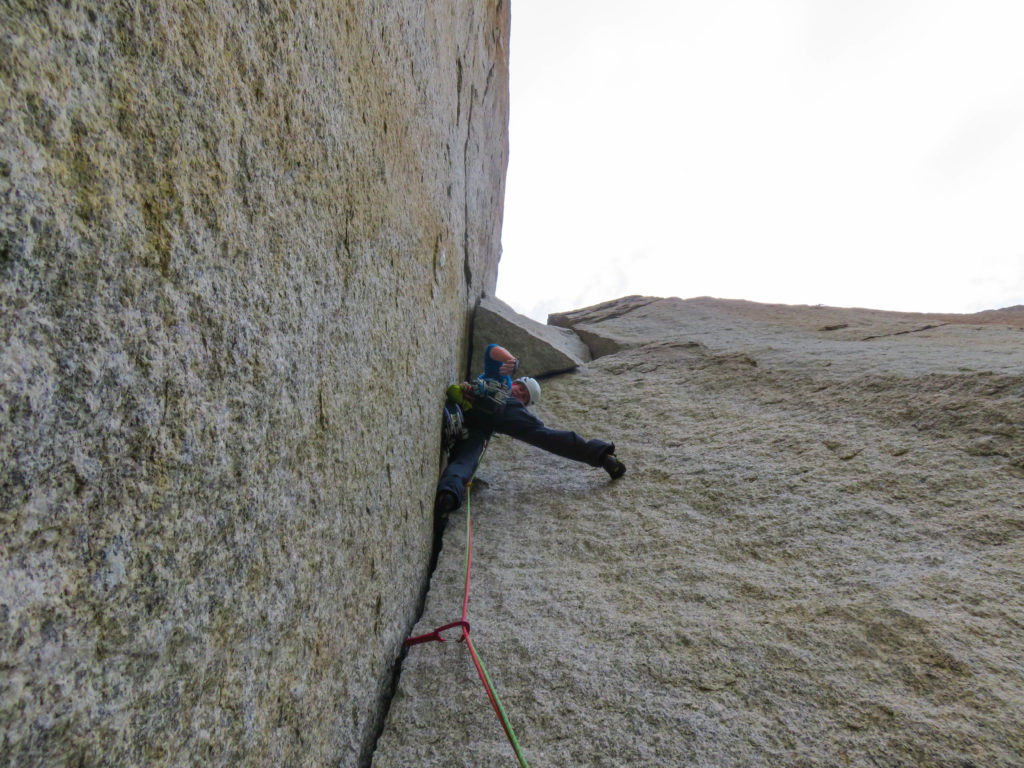 P7 (7a): Till just before the whipper. We traversed the roof to the right. 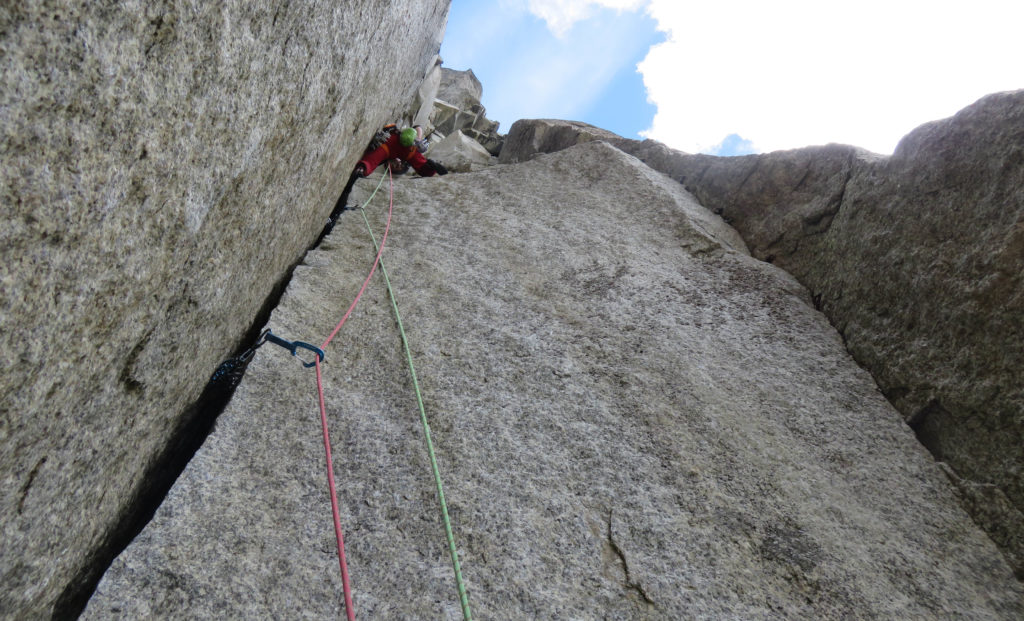 Juho on the last hard pitch. 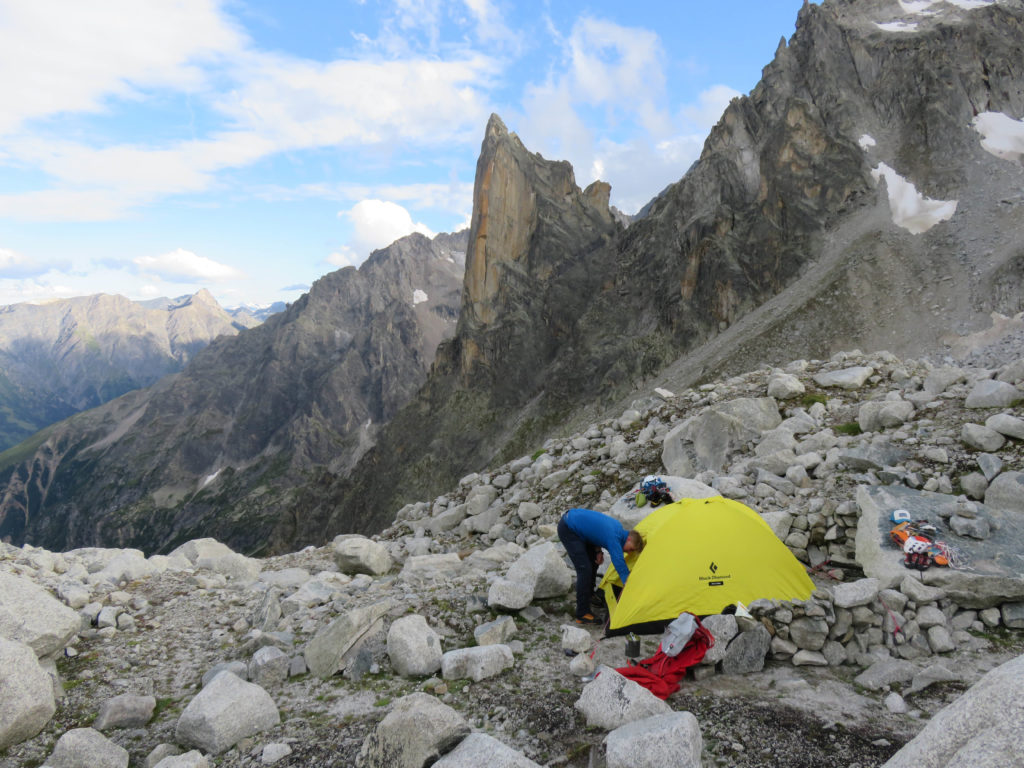 Our bivy place with Petit Clocher in the back.

I first heard about Sale Athée when Tatu Autio mentioned it in 2016. I thought it’s just a one route with anothers and didn’t think about it too much. Why to walk up to Charpoua side of the Mer de Glace for ten pitches of climbing when you can do the same much closer? Though, I googled the route in winter and found stunning images of perfect cracks. I really shoul do that!

Stoke got higher as everyone else seemed to be interested about the route this summer also. Image captions telling how amazing the route is. 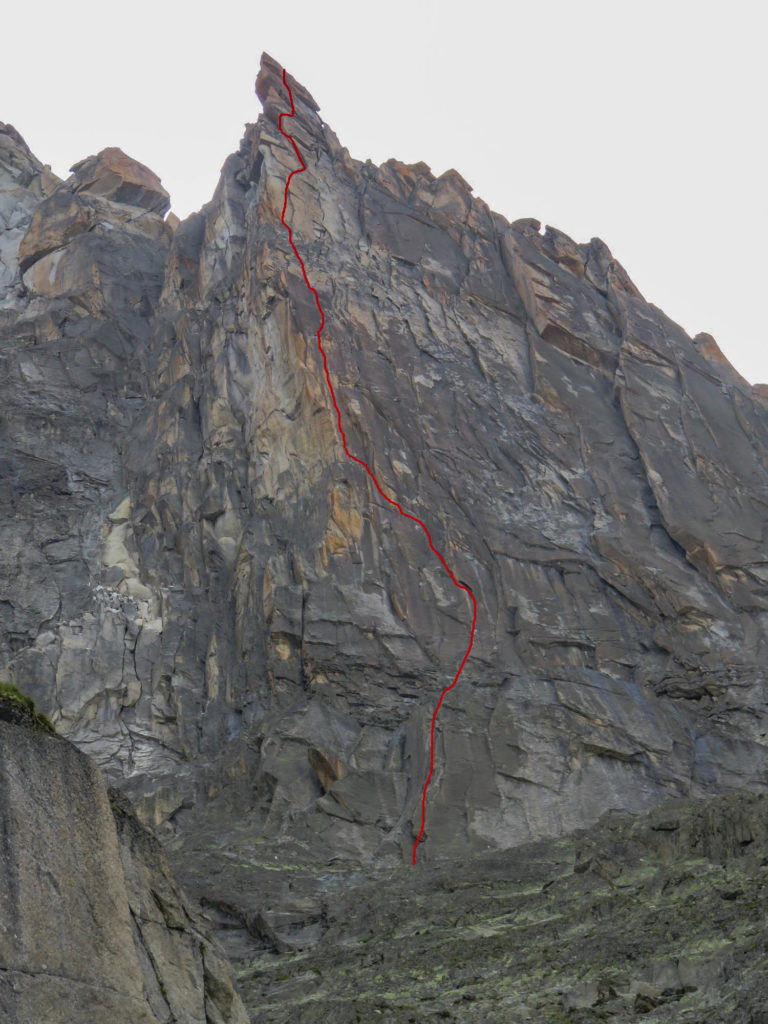 We took the first train up to Montenvers and walked 3 hours to the base of the route at mid-July. New approach path to the Charpoua is still more like a grass slope than a path, so last night’s rains made the walk a slippery one.

Also, the last 30min scramble to the base adds some adventure factor. Cross the snowy couloir and climb few meters on unprotected slabs (with good holds) to the fixed rope. After that just follow cairns and the easiest looking way up.

Cold western wind blowed as racked for the first two approach pitches of 6a’ish climbing. Clouds were coming and going. At least the friction would be good. Till set of first and I continued to a big scree ledge after that.

As I had most of the rack still, I started up the third pitch too. Scetchy pro behind flakes didn’t power up my confidence when doing thin slab moves few meters above the gear. I got lucky due to fact that Till got the fourth pitch, which begins with a big chimney flake. Not nice at all. But at this point we were warmed up and climbing got only better pitch by pitch.

Fifth rope lenght was slightly wet and I had to do a desperate deadpoint to a crimp to climb it clean. Somehow it worked. I arrived to a nice belay ledge under the money pitch of the route: 40m hand crack. I had tried to sneak this pitch to myself but after I led two pitches back to back lower down my tactic didn’t work.

Till started up and soon fought against the pump. Some sentences during the lead: “Put your hands and feet into the crack!” “But it hurts!” “This is crack climbing…”. The pitch definitely felt 7a+ for Till with some rest on gear, but as I had done only crack climbing in Finland I cruised it casually up. No more than 6b+.

Next pitches followed up spectacular finger cracks near the gendarmes left, sharp’ish edge. Situation was outstanding. I slipped on a pitch 8 while seconding making dreams of a on-sight ascent flying away quickly. Got my head together for the pitch 9 (7a) and even managed to do it despite of a rope drag. Sideway jam traverse ends to a delicate moves just before the stand.

Last pitch is supposed to be 7b/A0 or 8a. Thin slab climbing ending to a stopper move. We have heard about the chimney variation which would make more sense as all the pitches below are following cracks rather than face climbing parts. We never figured out the way of the variation and ended to a place which was like house of cards ready rumble down. Anyway reached the summit after some cursing. Make sure you follow the line of the bolts rather than venturing around.

Abbing the line went quickly and long walk back to the Chamonix through a moody and dark Mer de Glace finished the day. Probably the best rock route I’ve done! 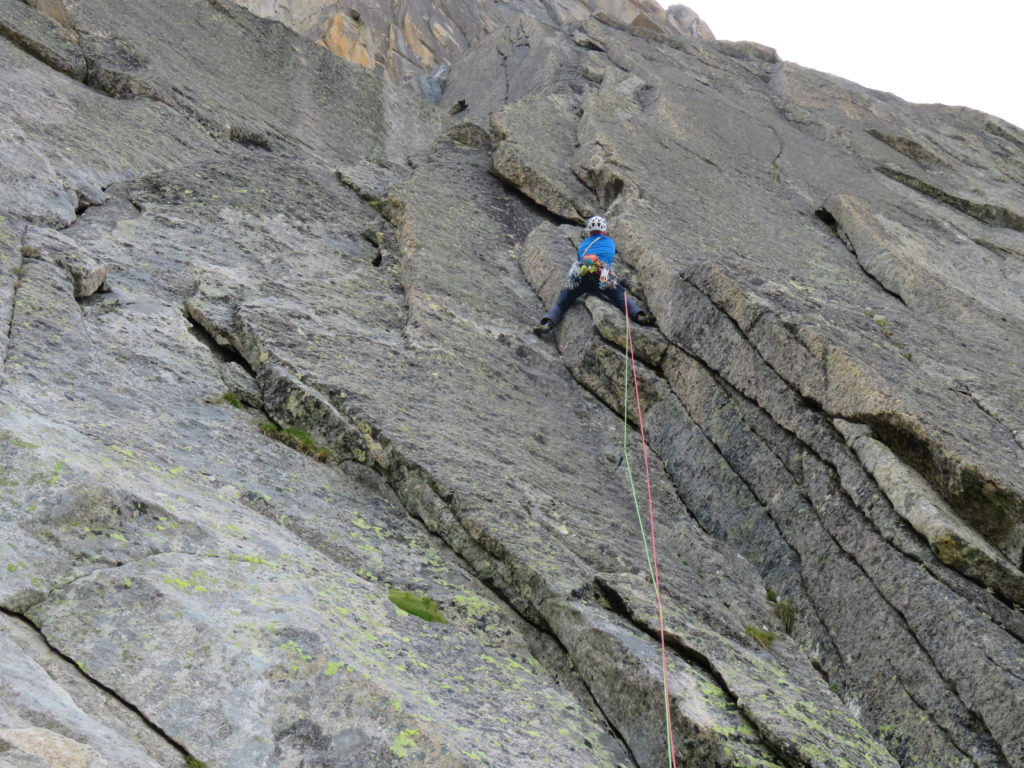 Two 6a approach pitches led to the ledge. 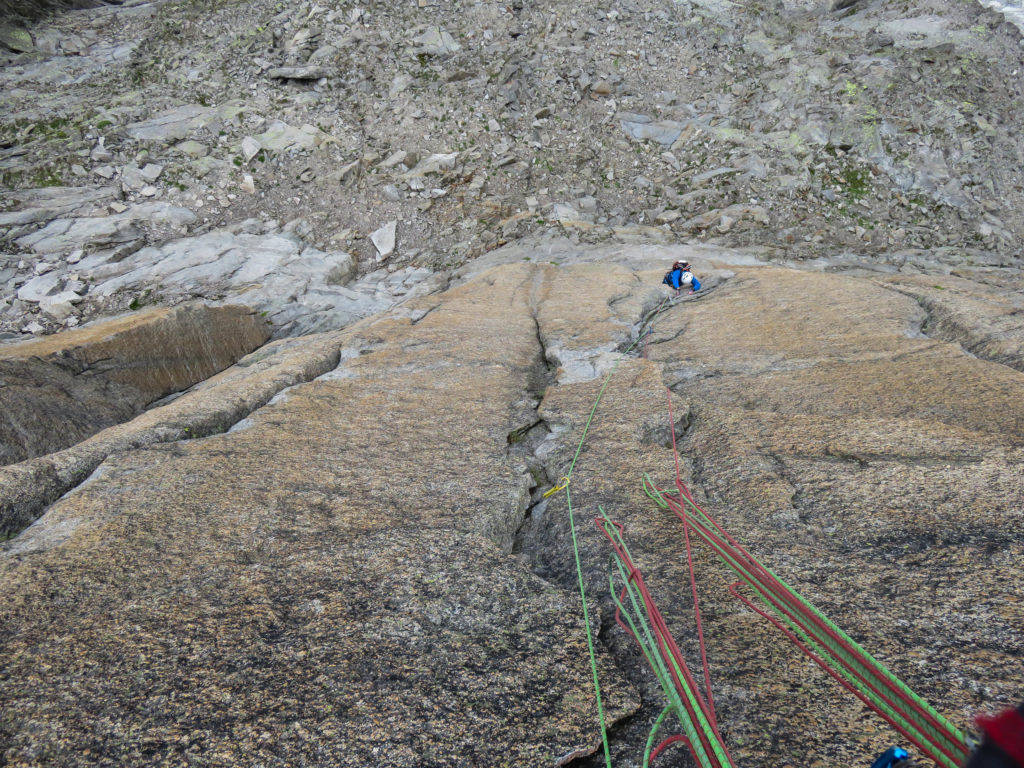 Till seconding slabs and flakes on P3 (6b+). 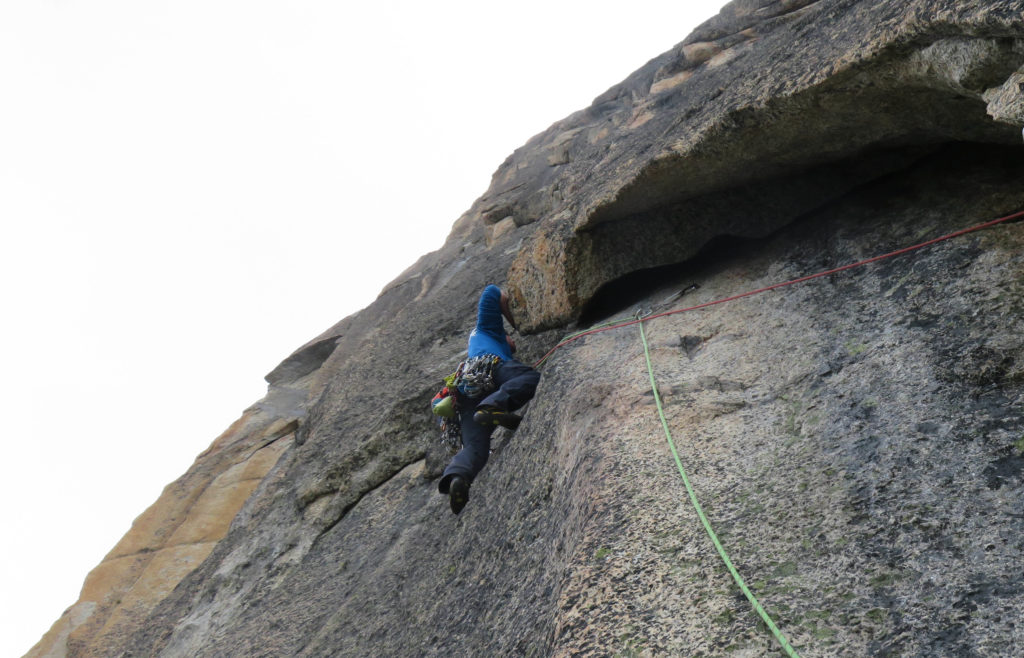 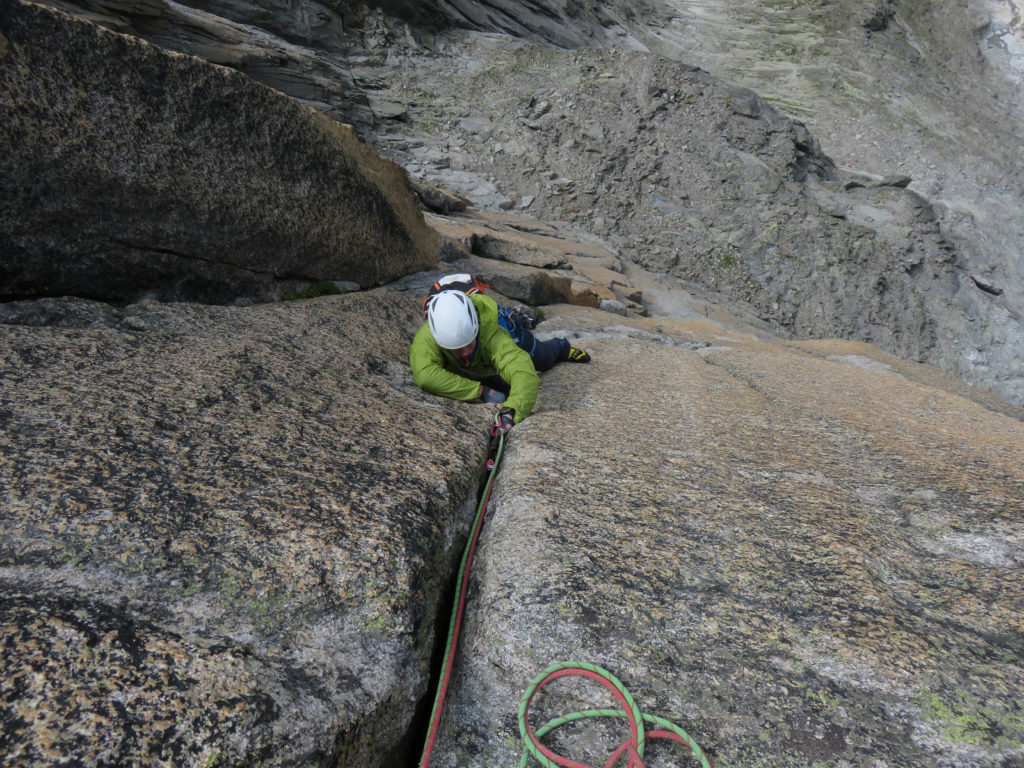 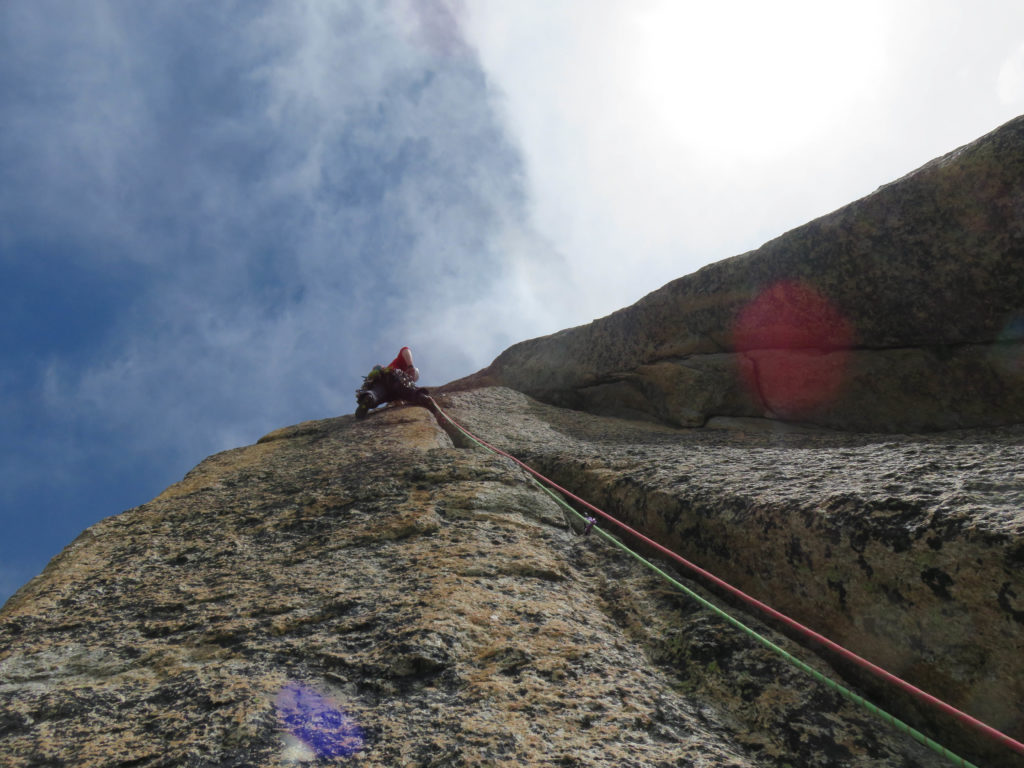 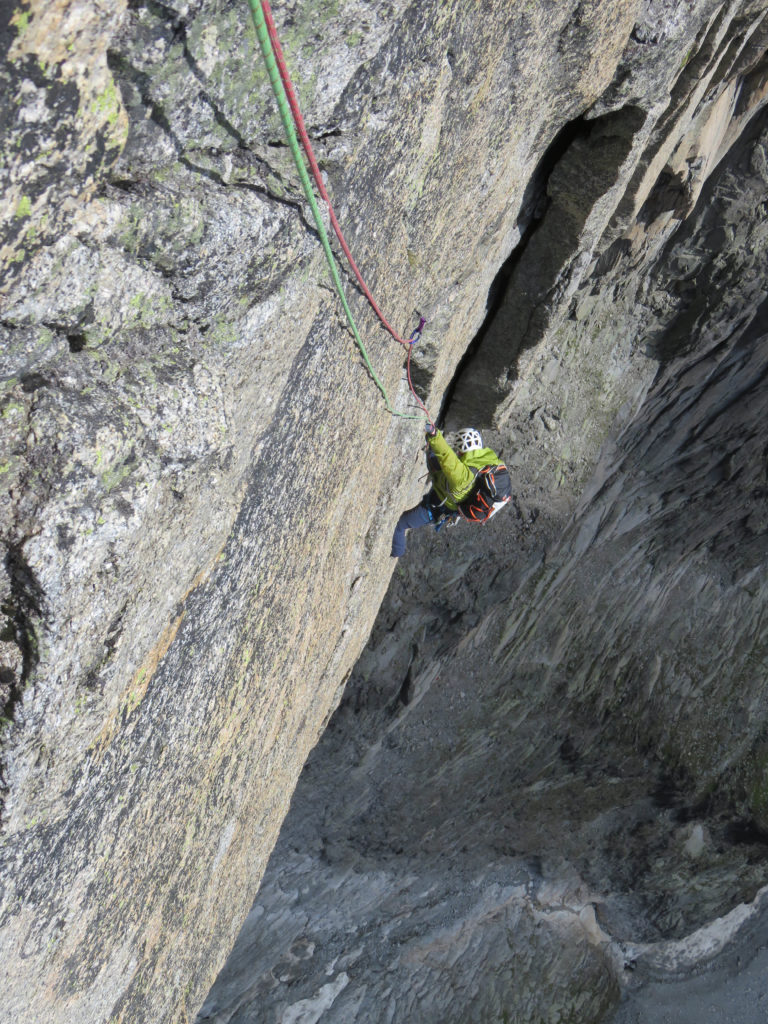 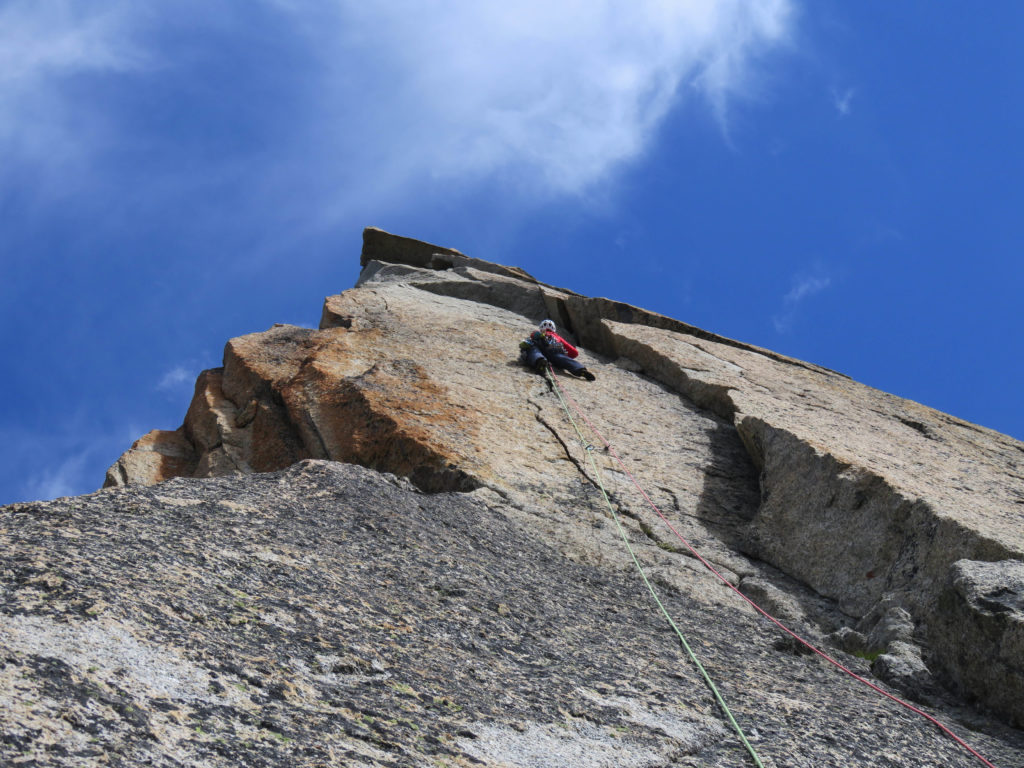 Mind blowing pith 8 (6c). This is the one where I slipped. Just after the bolt. 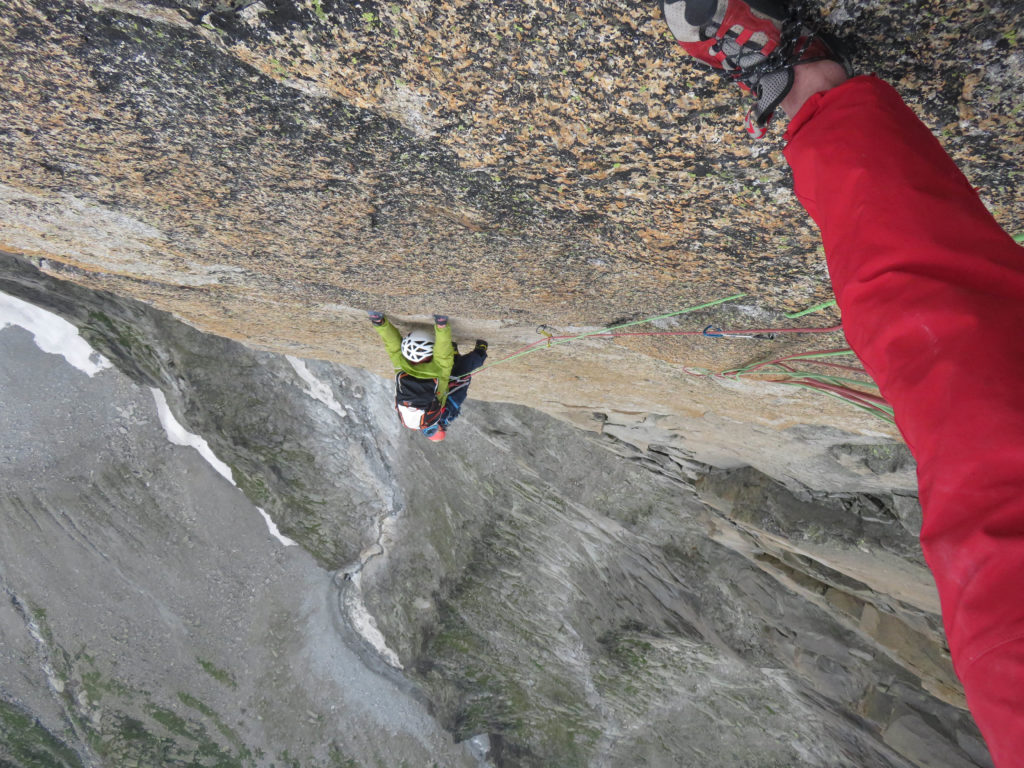 Till follows on P9 (7a). Hand jam traverse and crimping. 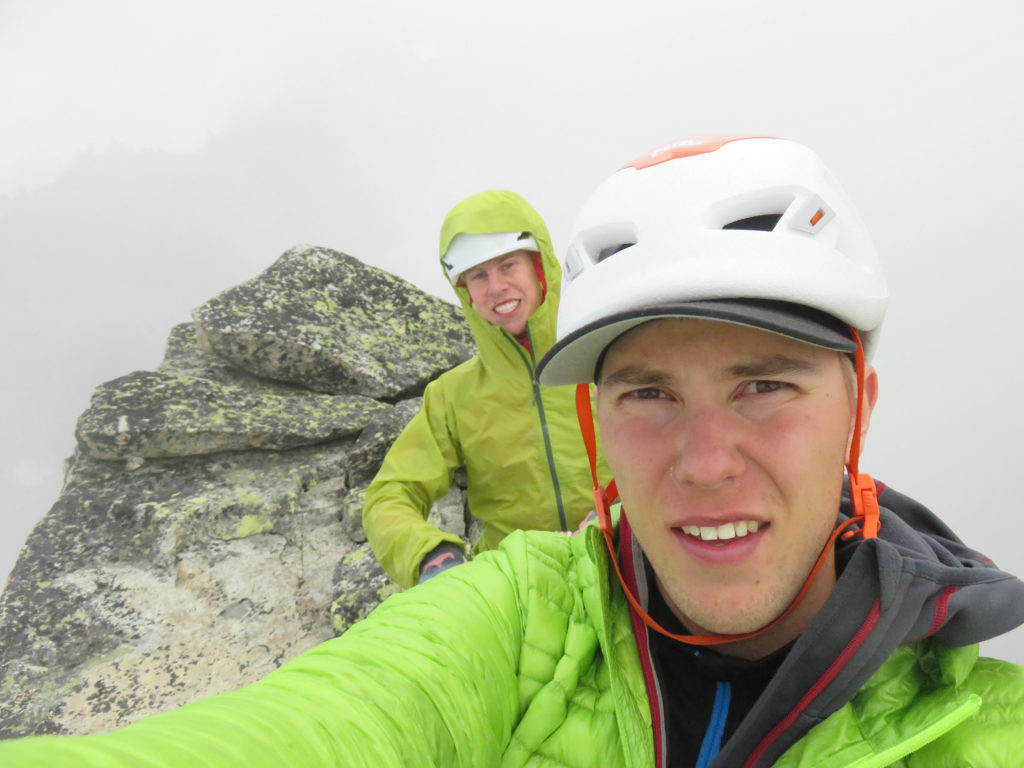 Top of the Gendarme.