Dent Blanche`s north face caught my attention imediately when I stood on the summit of Weisshorn, after a quick solo via classic east ridge route. Moderate snowfield climbing seemed to end to the impressive mixed headwall. I wanted to get to that face as soon as possible. 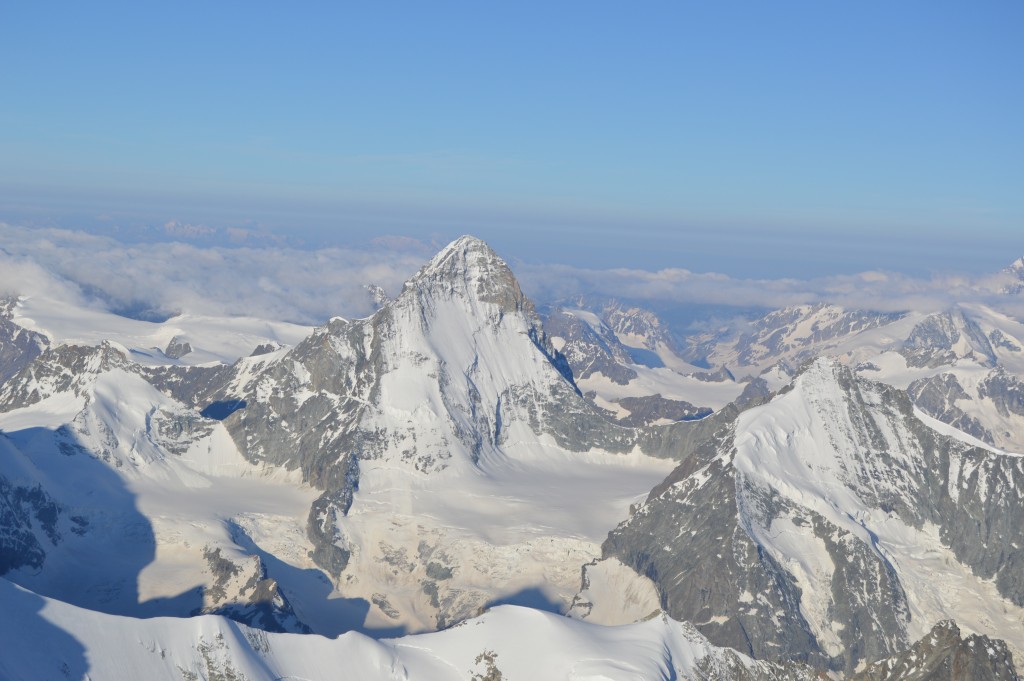 Snowy N face seen from to the summit of Weisshorn in June. 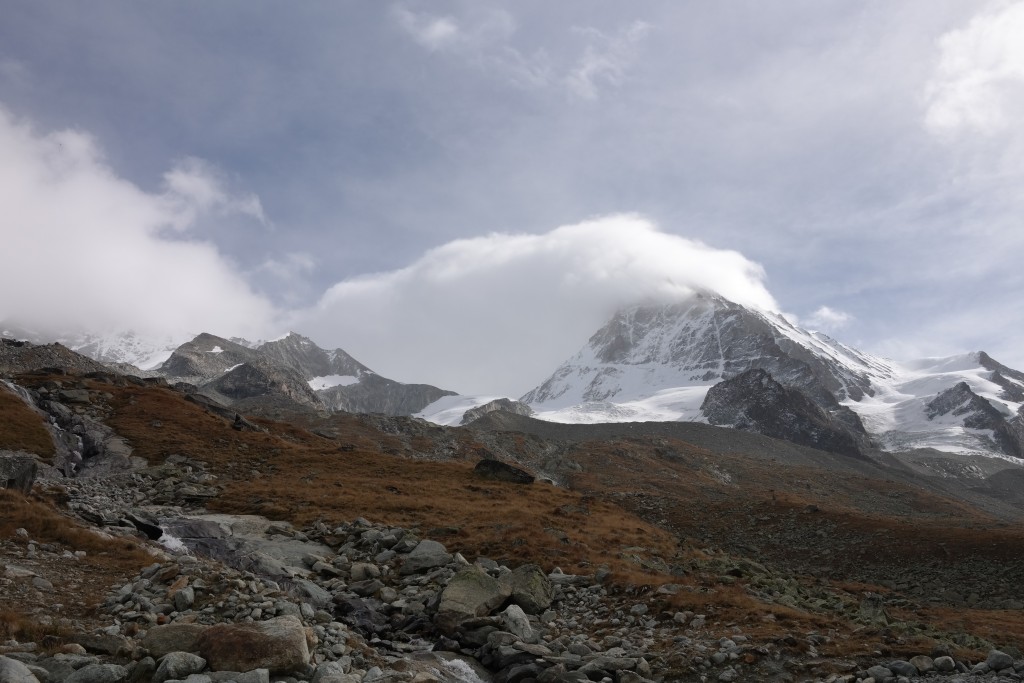 Three months later me and Juha Sillanpää setled in for the night at Col de la Dent Blanche bivouac hut, while foehn wind hammered mountain tops. We had arrived straight from the Malpensa airport. At Ferpecle parking lot, where the hut hike begins, we met an French UIAGM-guide whom had soloed the face in 4 hours. We expected to double the time with a longer, direct start. There was only one thing we frogot. We didn`t have acclimatisation. 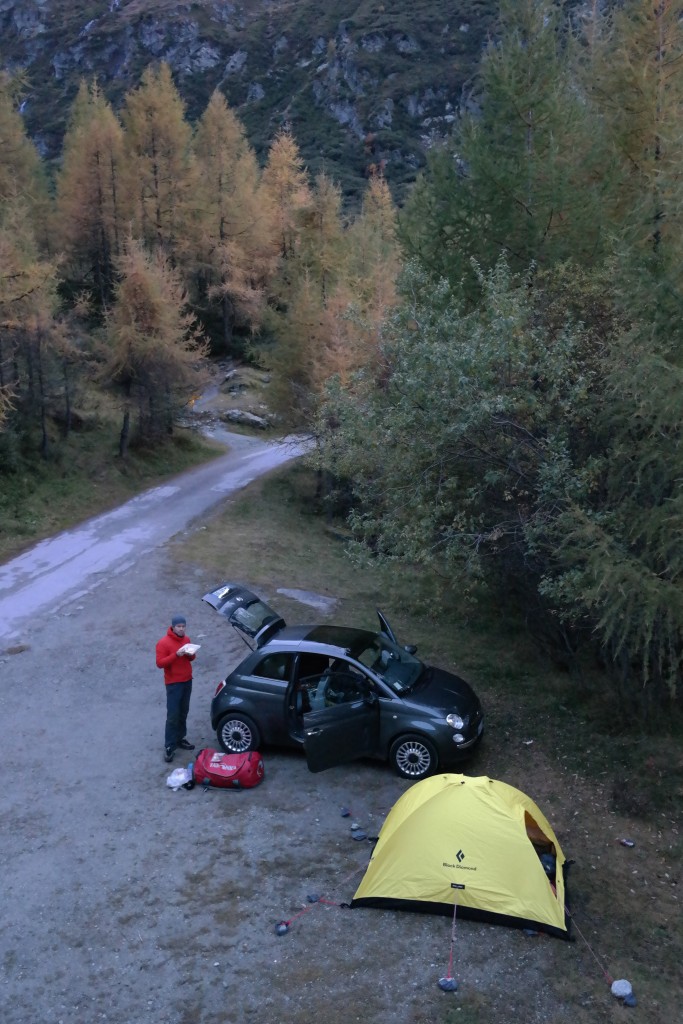 Another very windy day and night later spent in the hut doing nothing, we did three ”committing” abseils into the Grand Cornier glacier. Loose rock couloir would be nasty to climb up in case of a retreat. Short traverse led us over the schrund. 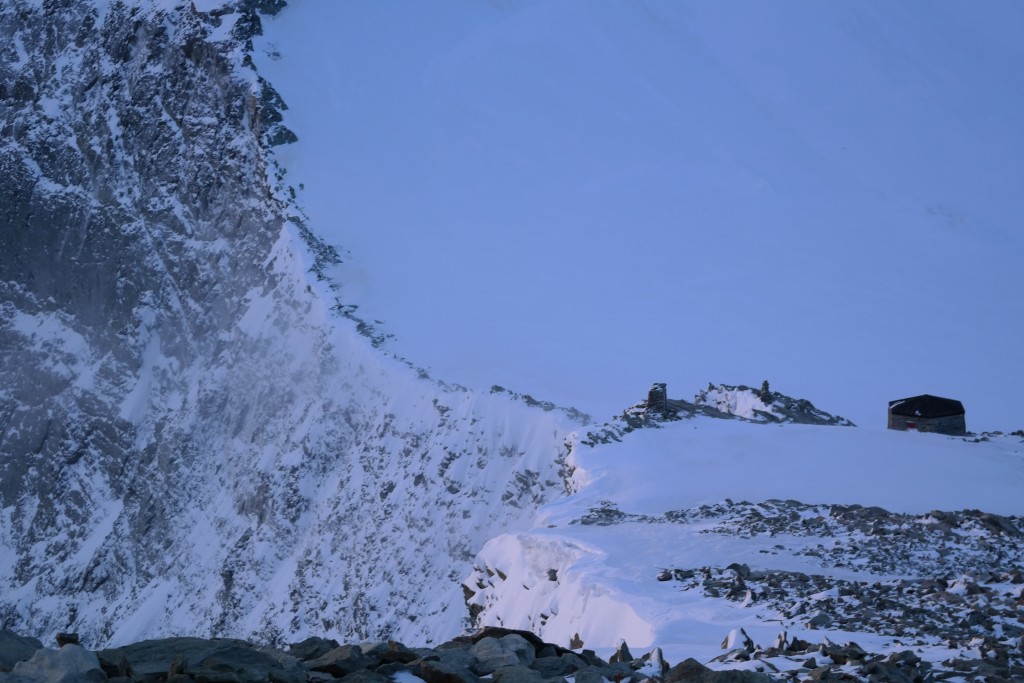 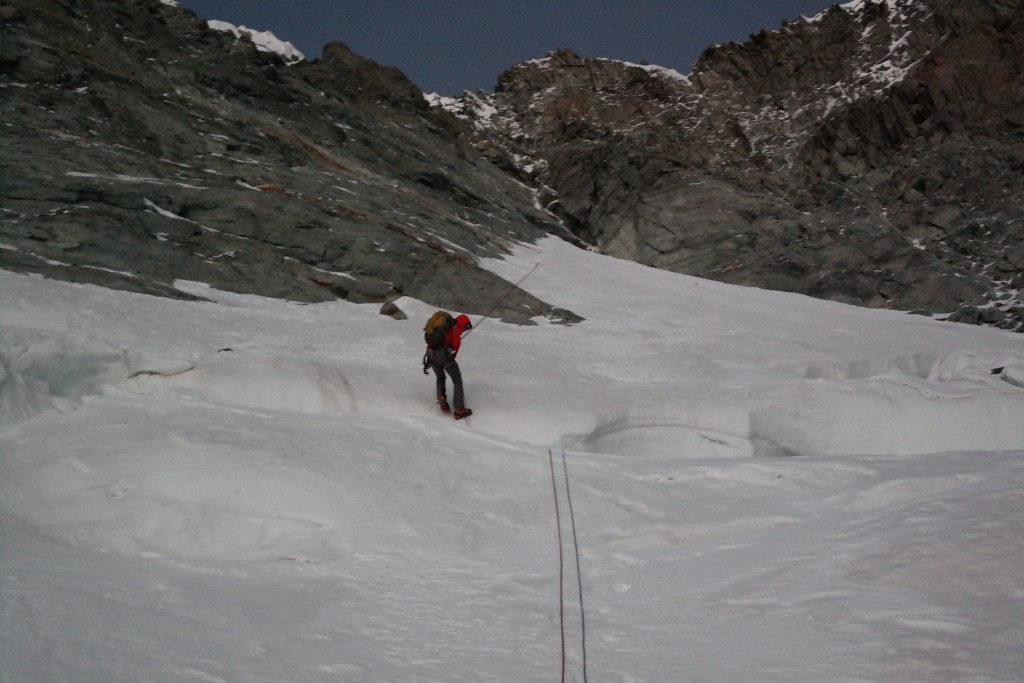 Juha doing the last rappel down. 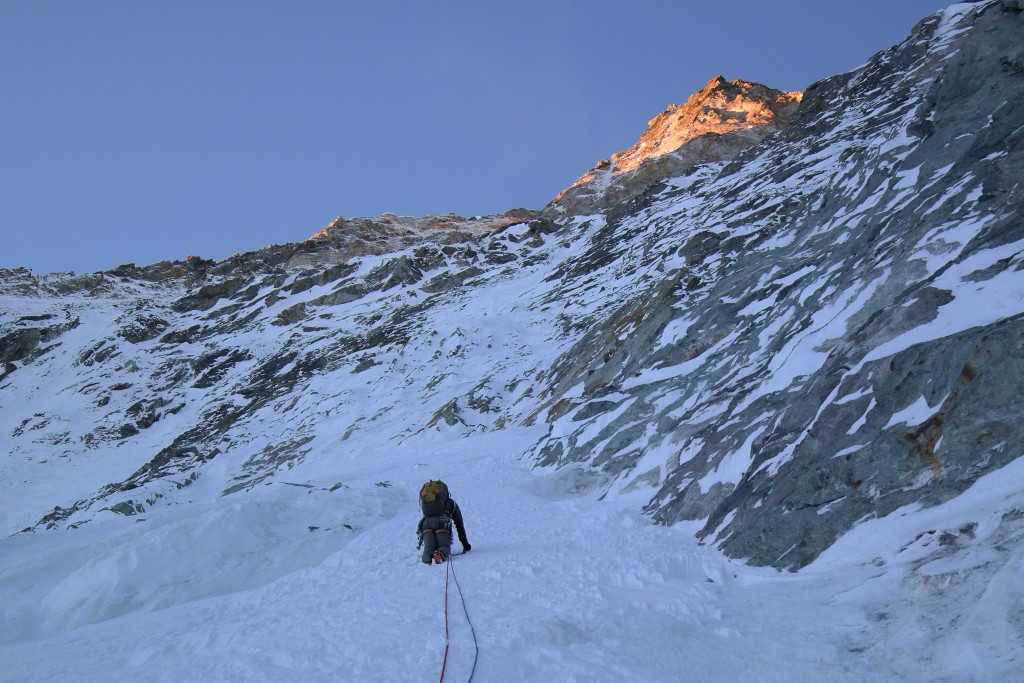 We had found very little info about the route, but the most logic line looked obvious. Low angled ice runnel and one steeper step of uncolisated snow brought us to the big nevefield. No chance for any protection, we romped up that thing. Slow pace would cause problems, but we kept going up. Clouds covered the summit again. 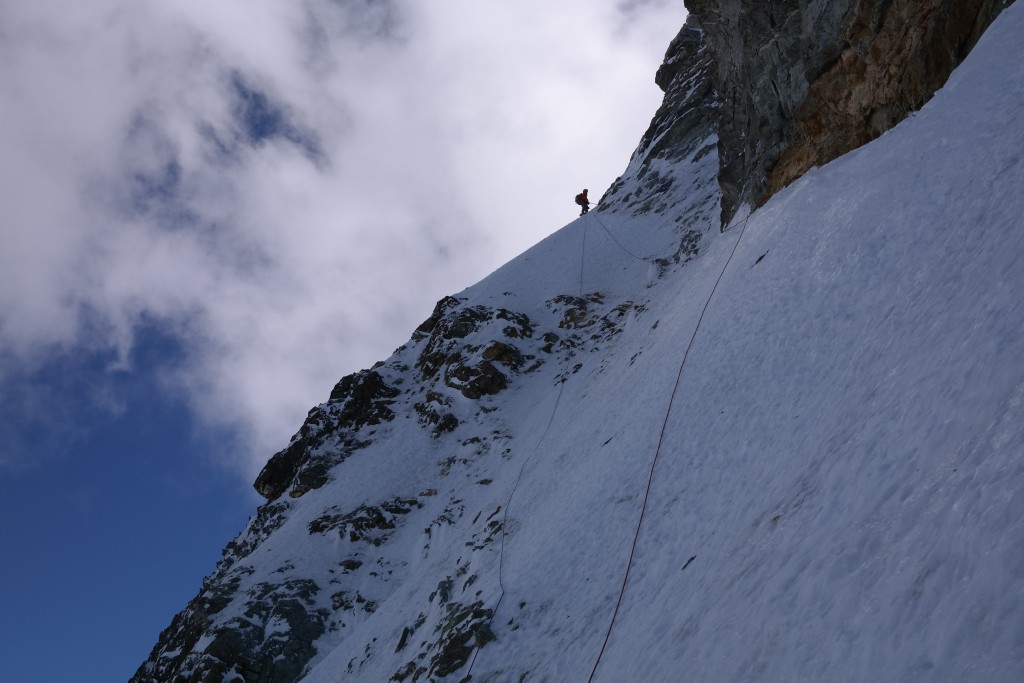 Juha top of the ramp.

Hollow ice bulge guarded the headwall. It was already 5pm. We had two hours of daylight left. Due to traversing nature of the earlier section, it would take us longer to climb down than up. ”Should we continue? Yeah!”

It got dark top of the ice crux. One pitch of WI4 had been the best climbing so far. Juha suggested bivi. I agreed. One hour later we had a small ledge to sit on. We didn`t have any food left due to extra day spent in the hut. Luckily, night wasn`t too cold. Juha`s decision to carry a sleeping bag and a mattres saved us from a freezing night.

It snowed all night. At 7:00 am we continued climbing over some very loose ground. Rock quality in Valais isn`t always that good, but this was horrible. We summited soon after and begun downclimb via razor sharp south ridge. 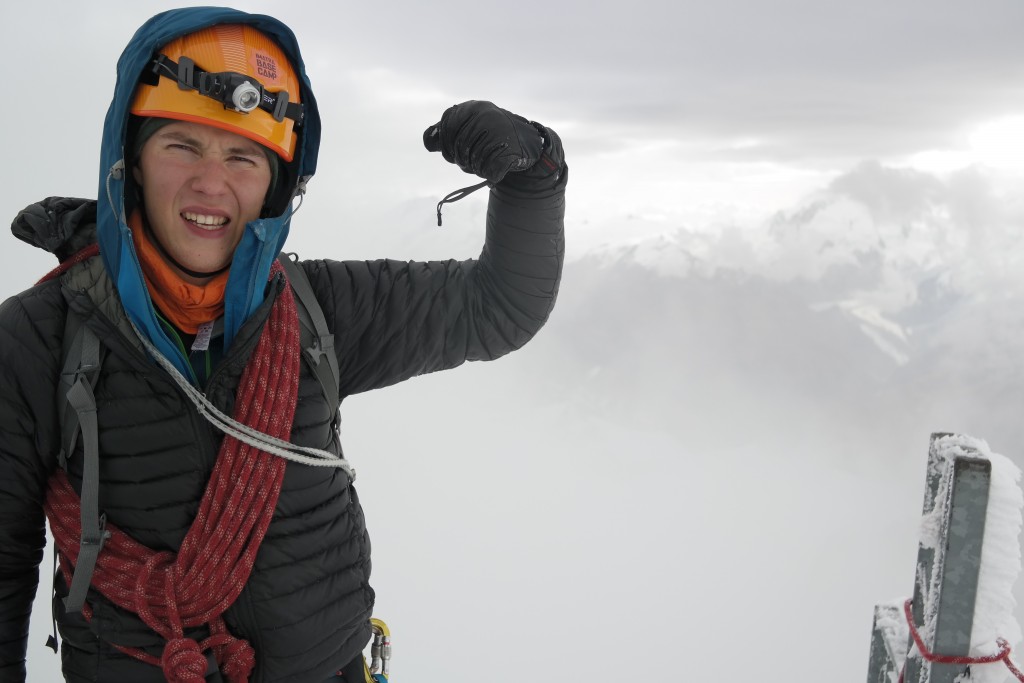 Juho on the summit of windy Dent Blanche. 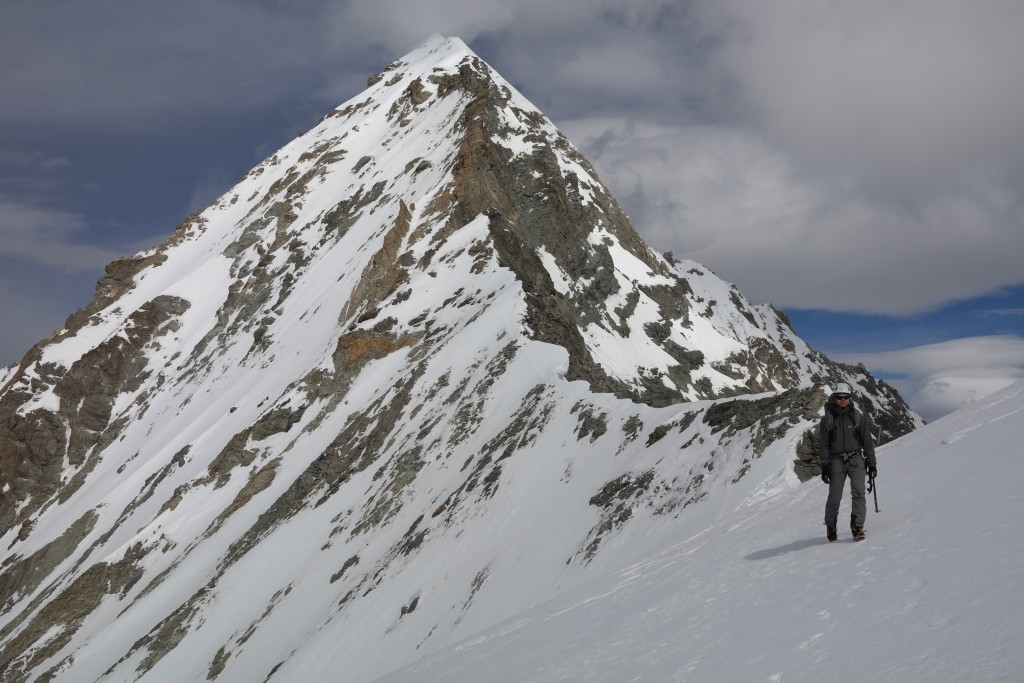 Quick Coke stop at Dent Blanche hut, which was under renovation, and long`ish walk back to Ferpecle finished our adventurous two days on the mountain. 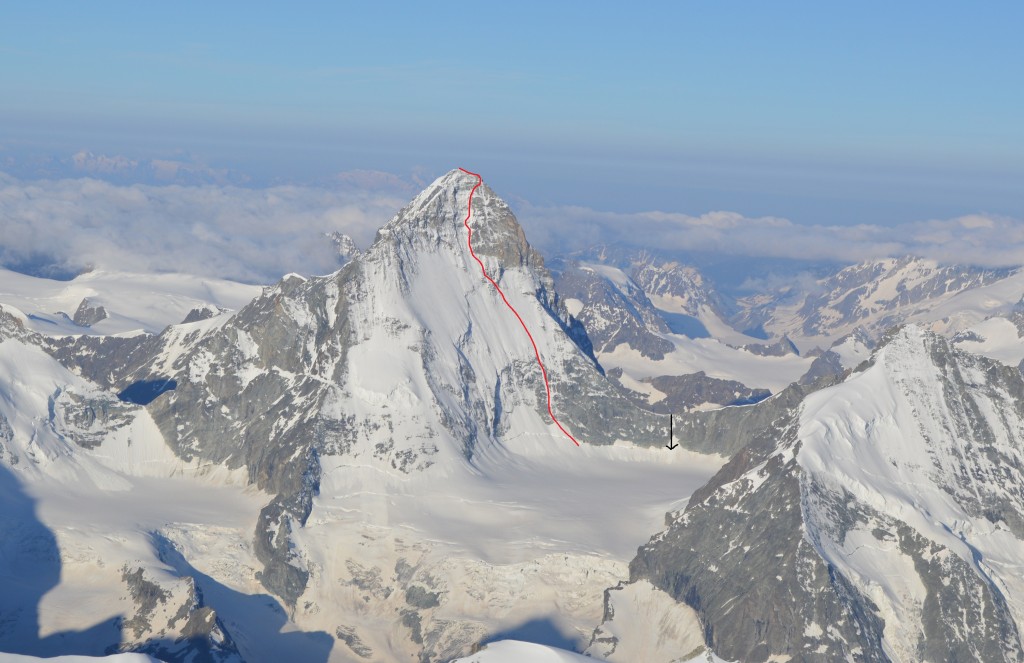