During the crazy Autumn of 2014 we were below the north face of the Grandes Jorasses second time in a week. I and Juha Sillanpää had climbed the Colton-McIntyre, the north face of Dent Blanche and attempted the Supercouloir. It was my first bigger objective trip to the Alps if one can say so.

We suffered a chilly and wet night under the bergschrund, our upper bodies inside a snowhole and legs outside, collecting snow.

It was windy when we started the Slovenian start of the Croz Spur. We made good progress but big amount of spindrift forced us down from the 2nd icefield. Conditions were good and drift of snow would only reduce higher, but very serious experience in the Supercouloir few weeks earlier affected us a lot. There we were trapped by a massive spindrift avalanche for several hours. Juha was only mid-way up the second pitch but just after hours we were able to rappel off. Powerfull and scary, but we learned our lesson. 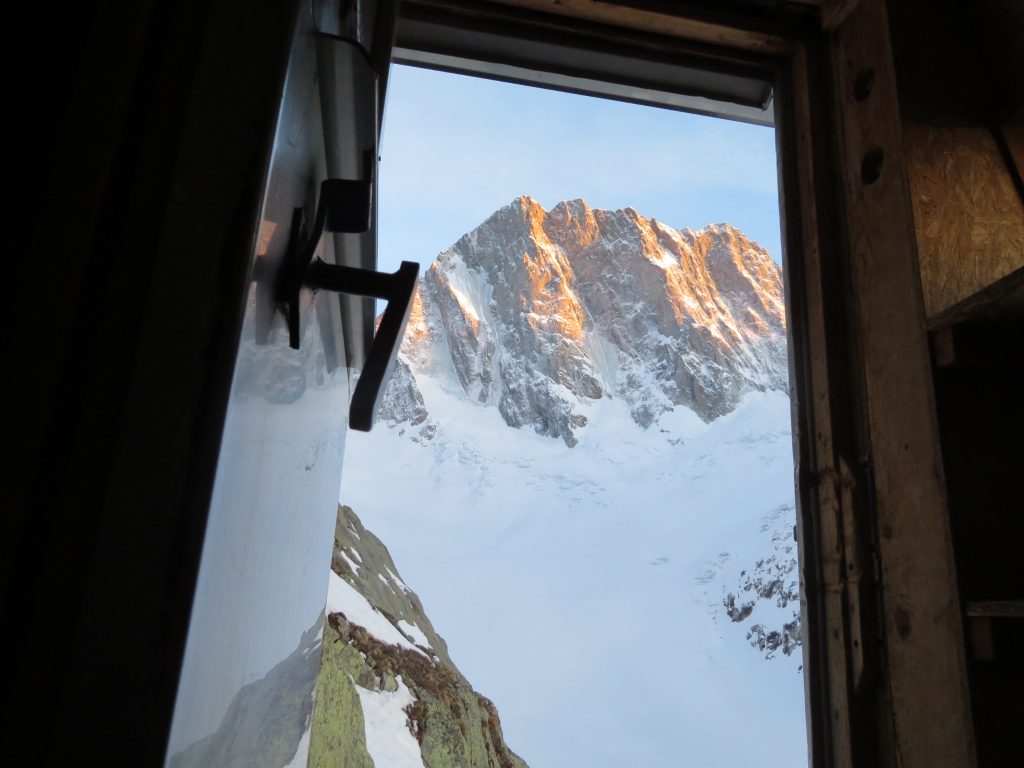 Face of the dreams and epics.

Back to spring 2019 then. Before I flew to the Alps in March I had two big routes in my mind which should be doable in dry conditions and short’ish weather windows; the Lesueur route and Croz Spur.

After the Dru we found out that a team from New Zealand had already climbed the Croz Spur, but with the Slovenian start and reported quite good conditions. As there were no big windows for multiday routes in April, Croz Spur seemed like a best bet.

I talked a lot about tactics with Etienne and in the end we took one single rope, bivouac equipment were left to the valley except our stove and snowshoes came along.

We walked to the Leschaux refuge on a sunny Wednesday afternoon. Already snowshoes came handy in a deep slush.

The evening went by eating a lot and watching sunset colours lit the Jorasses on fire. This refuge must be one of the best what comes to views. Though Couvercle might be a winner in that competition. 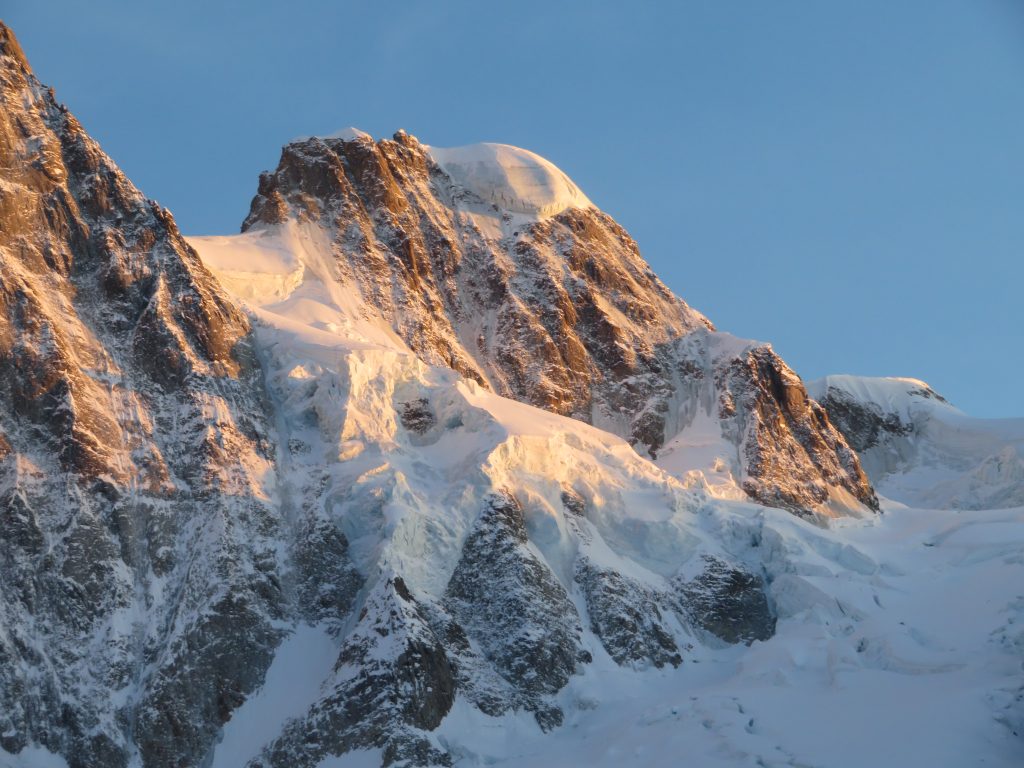 We woke up at 02:15 and left the hut at 03:00 bellies full of muesli and tea. Glacier was frozen but carried our weight only with snowshoes. Snow got deeper closer the face and we were really happy with these strange gadgets on our legs. Only one visible crevasse we had to cross which made going rather quick.

Bergschrund was passed at 06:00 quite easily. We climbed two pitches to get to the face proper and simul climbing terrain. Second pitch was a bit thin and required a belay for sure. 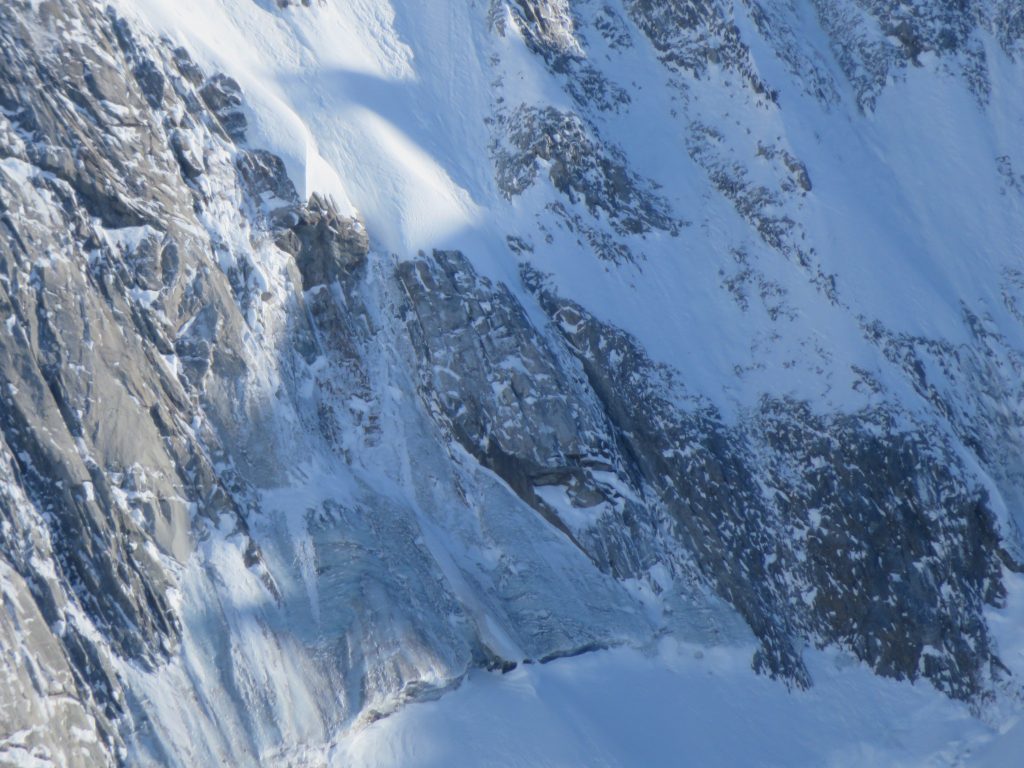 Schrund and first pitch. We did the obvious ice strip to acces the face. 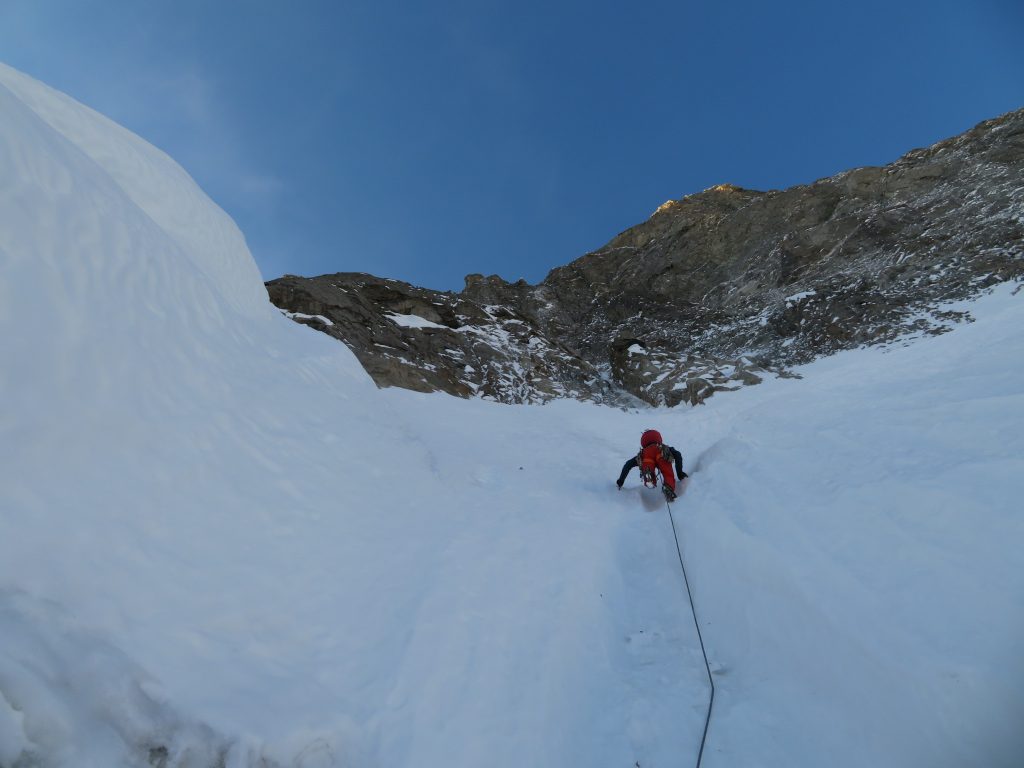 We did two long simul blocks to the base of the steeper section above the 2nd icefield. With microtraxion and superb ice conditions this was safe. Again a bit thin but one timers all the way. 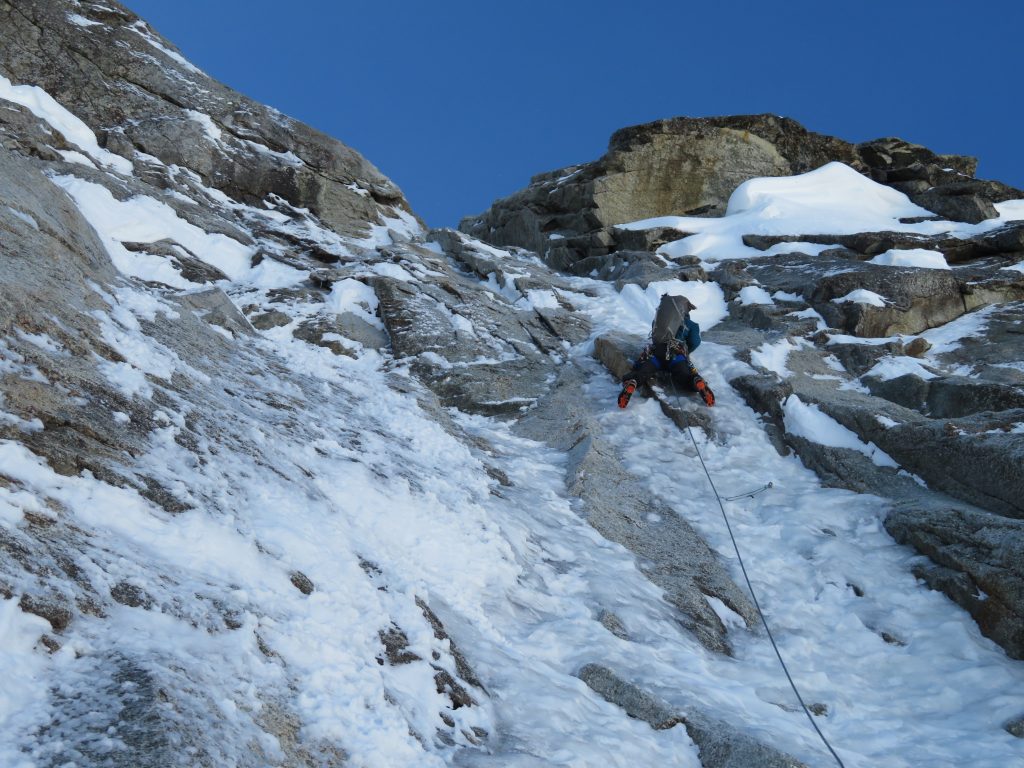 Time was 09:00 when I started the first mixed pitch. Way to the M5 corner was more difficult than corner itself due to lack of ice. With thin protection I commited to the smallest of loose ice drips in a long time. With calves shaking I reached the snowy ledge below the second mixed pitch which is usually iced up.

Etienne tried from the middle but refused to commit for the ice without pro. He then traversed to the dihedral on the right and sent it as a M6 with quite good pitons and cams. Still more enjoyable for the second. 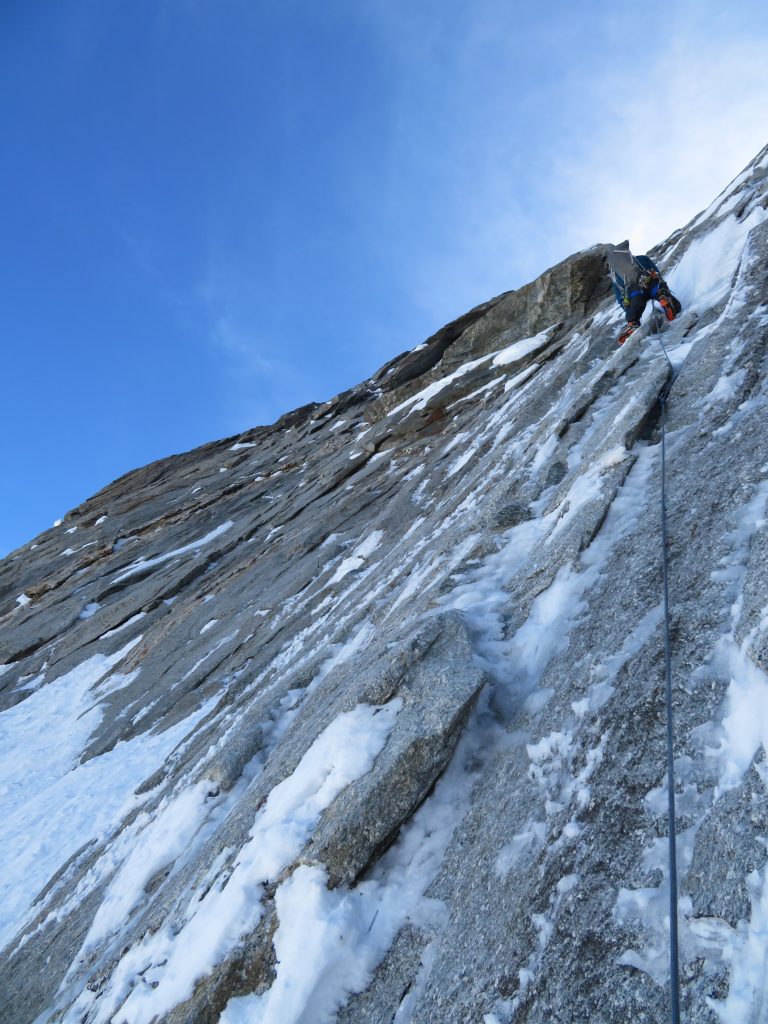 Second mixed pitch in the middle. Only big pitches this time.

I took the lead for the next big simul block all the way to the col on the spur proper. Really fun to be able to do the easier terrain in huge blocks! Clock was now 13:20 because mixed pitches in the middle took so long. 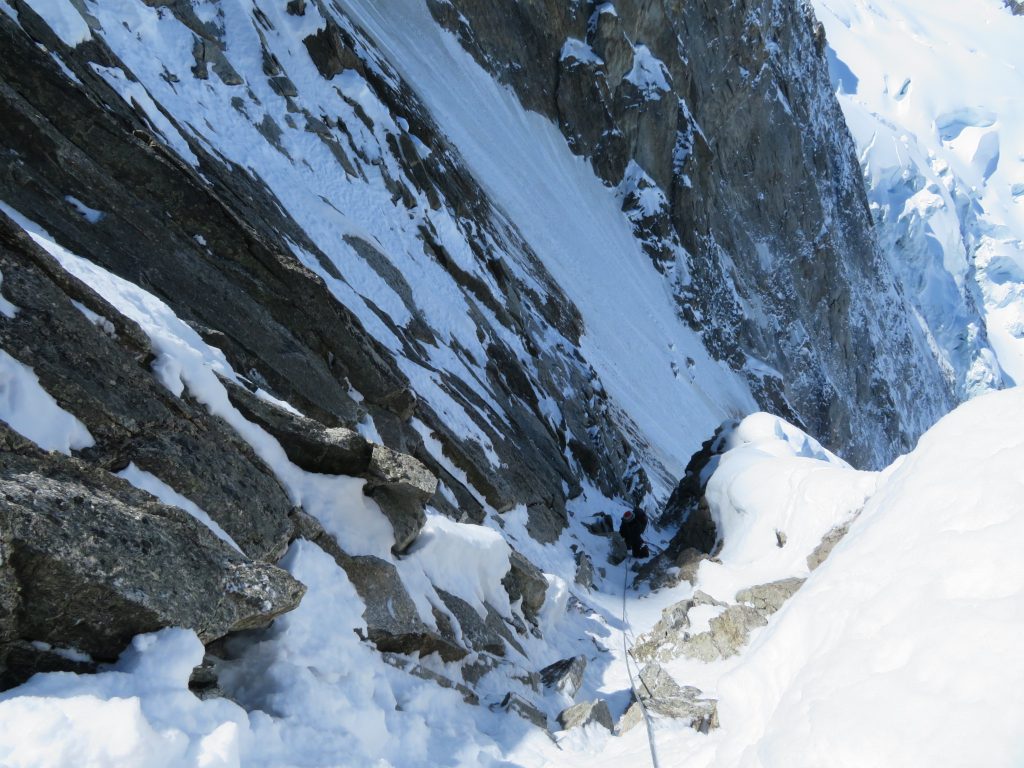 More simul climbing to the col.

We knew that next part would be the crux as there was still a lot of snow covering slabs. Etienne did one good pitch which was followed by one of the most horrible pitches of my life. Low angled slab with fresh snow. You never could know if you hit the rock or ice below. I cleaned a lot and slowly forced myself upwards on frozen mud-like rock. Took ages but we reached a platform below the last two or three pitches. 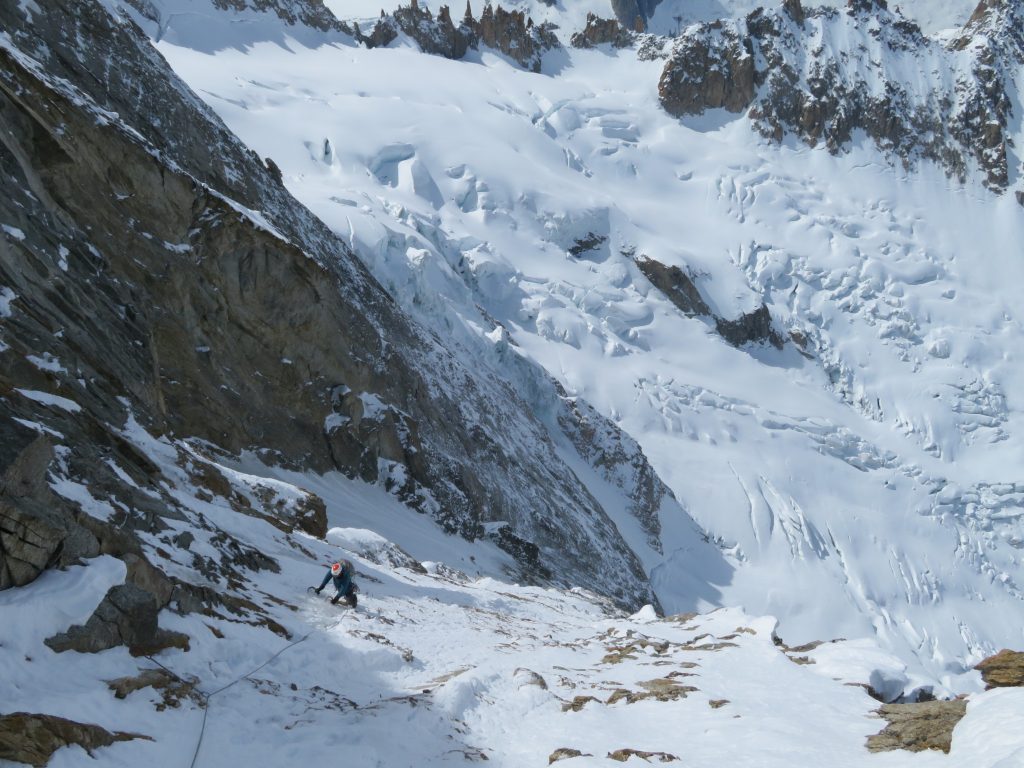 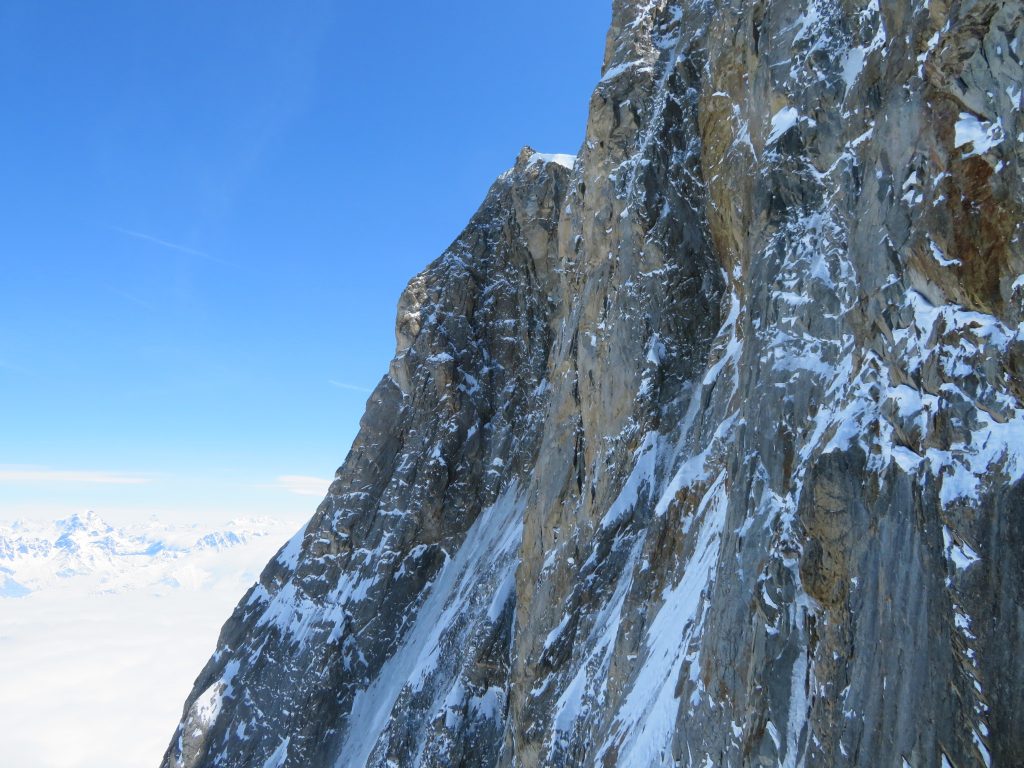 New Zealanders climbed the left-hand M5 finish which Etienne went to try but came back as there was too much snow to climb a rocky slab safely. Right-hand finish had some visible ice high up but maybe not enough for a safe climb. We had only one option left. The original 6a rock climbing show on loose but quite dry looking blocks. 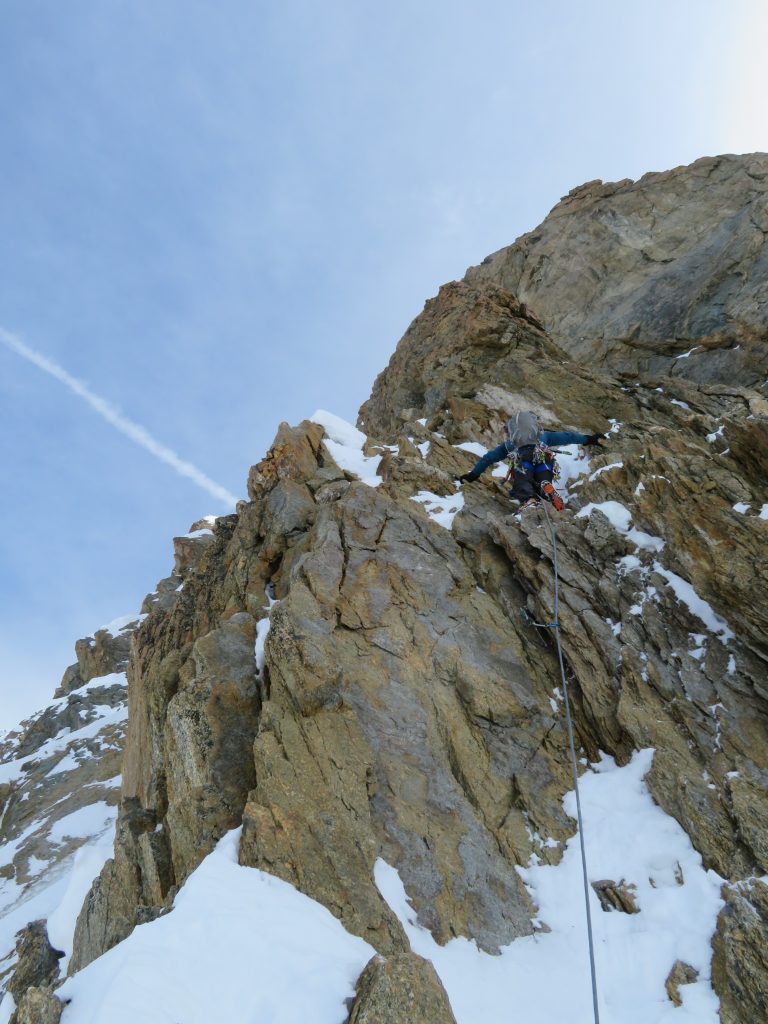 First of the exit pitches. M5 goes to the left and 6a to the right of the tower.

Etienne led first two pitches. First had incredibly loose rock but second one was almost a good pitch with growing exposure. Belay was bolted?! which gave me some courage to enter to the final 6a pitch below the summit ridge. First meters to a piton were easy but then a chimney begun and good holds and protection ended. I was hanging from a hand jam (behind a moving flake) 1000 meters above the glacier and Colton-McIntyre icefields. Exposure was totally crazy and dizzying. Never been in a so exposed place on a alpine climb.

Chimney looked horrible and dangerous but I should make a plan quickly. I saw some juggy holds on the right but terrain was overhanging there. I committed. Meter by meter I found more holds and some pro until it all seemed to end again. I put a 0.75 cam behind a hollow spire and went back and forth, refused to commit to a traverse back to the chimney.

In the end I did, only to find myself under some snowmushrooms. It took ages to clean them including the cornice on the ridge. I pulled from the cams whenever I could. Drag was heinous but I made it to the ridge. When Etienne arrived it was past 19:00. I really don’t know where we used all those hours after quick start. 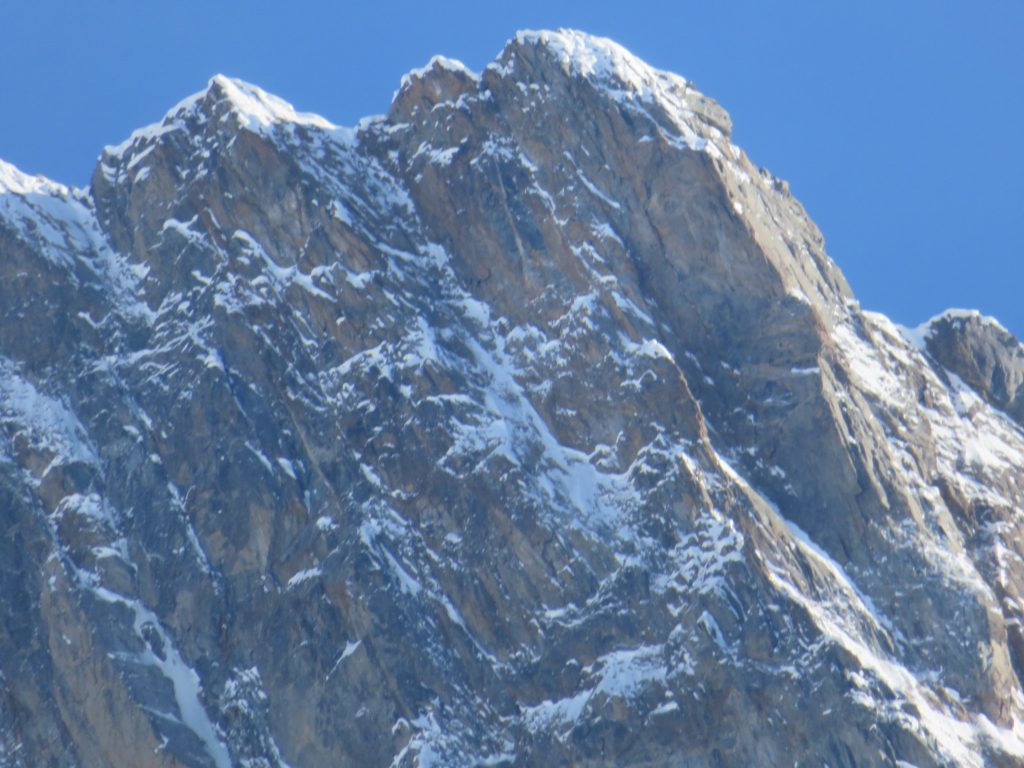 Upper part of the route. M5 option is the obvious low angle corner in the middle and original 6a finish is the wild ramp system above it.

We underestimated the final wall for sure and lost a lot of time because our minds were already in ‘soon to be over’ mode. Again a lesson learned. It affects your climbing pace and skills!

On the Italian side cloud cover seemed to be at the level of the Reposoir. We did few rappels and some down climbing to get to the glacier which had a crust on the top and deep slush underneath. 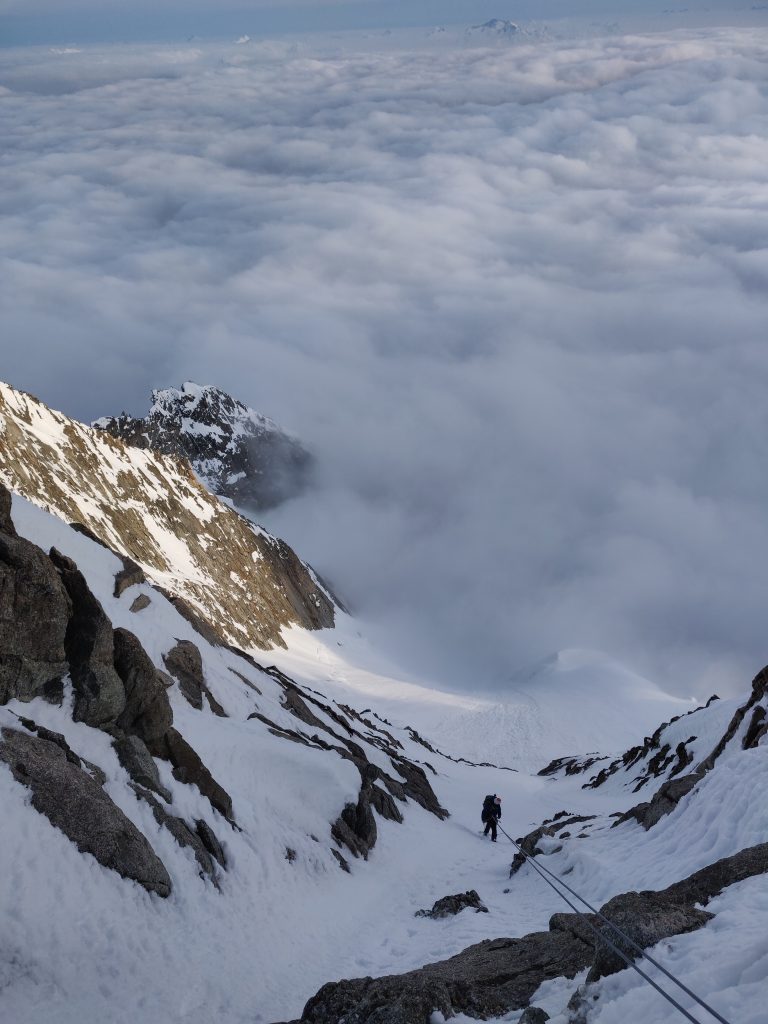 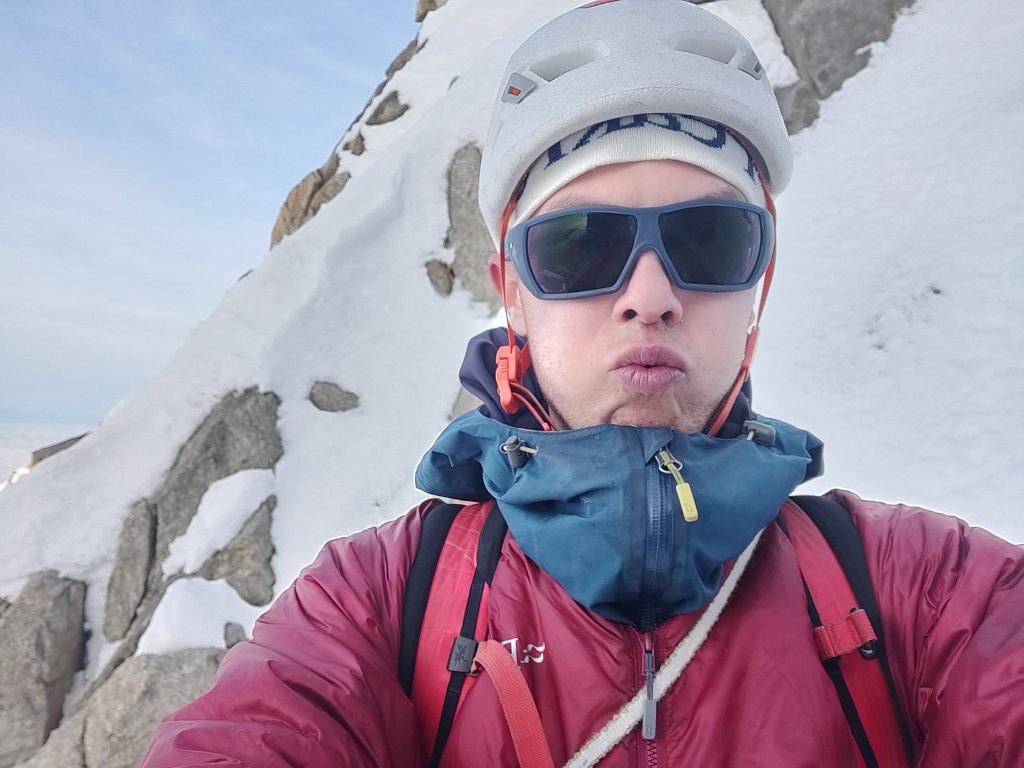 Knowing how the descent will turn out.

Whiteout was annoying and we managed to go too right. When the darkness fell I was sure we were not on the Reposoir but where in earth we were? GPS showed the place but still it didn’t match. When the clouds moved for a second and everything turned yellow due to moonlight we saw the Reposoir on our left-hand side. Damn!

Luckily we didn’t have to climb too much up again to reach the spur. From there on we down climbed and found the rappels easily but next task would be hard. With worryingly low visibility our only chance to avoid cold bivy was to follow Etienne’s phone’s GPS map app. Checking our location in every 100 meters while zigzagging around crevasses Etienne made awsome job leading us through the mist. Seeing the lights of Planpincieux never felt so good.

Last few hundred meters to the Boccalatte were fast with improved visibility and snow conditions. We reached the hut just before midnight, two or three hours later than our planned latest time but in good spirits anyway.

Jorasses tested us for real despite easy looking route on paper. New Zealanders had less snow which made the final wall a bit quicker for them I quess. I was pleased that we made to the hut despite the fact that top part of the route didn’t went excactly as planned or the descent as smoothly. I think uncertainties and difficult situations are good learning experiences for us whom climb a lot inside the safety net of the Alps. If we want to climb safely in the greater ranges and deal with the unknown. If I think our Mt. Hunter climb for example. We had a rough plan but had to climb through the night, bivy in a unplanned snowcave and deal with the harrowing descent. Actual plan shaped up during the climb. Don’t understand me wrong as better planned the better preformed but there is always unknown factors you have to deal with if you want to come back safe and succesfully summit on the way.

Etienne thought that maybe our ascent on Croz is not a success as we really had to battle a bit more than we had wanted and didn’t manage to plan or see the outcome beforehand. Good thoughts because we were forced to climb harder terrain in the end than planned. What if out rack was too small for it or direct exit also proved to be full of snow?

In the end I think it’s only good for the future but good to go through the climb and actions step by step after the climb to learn. 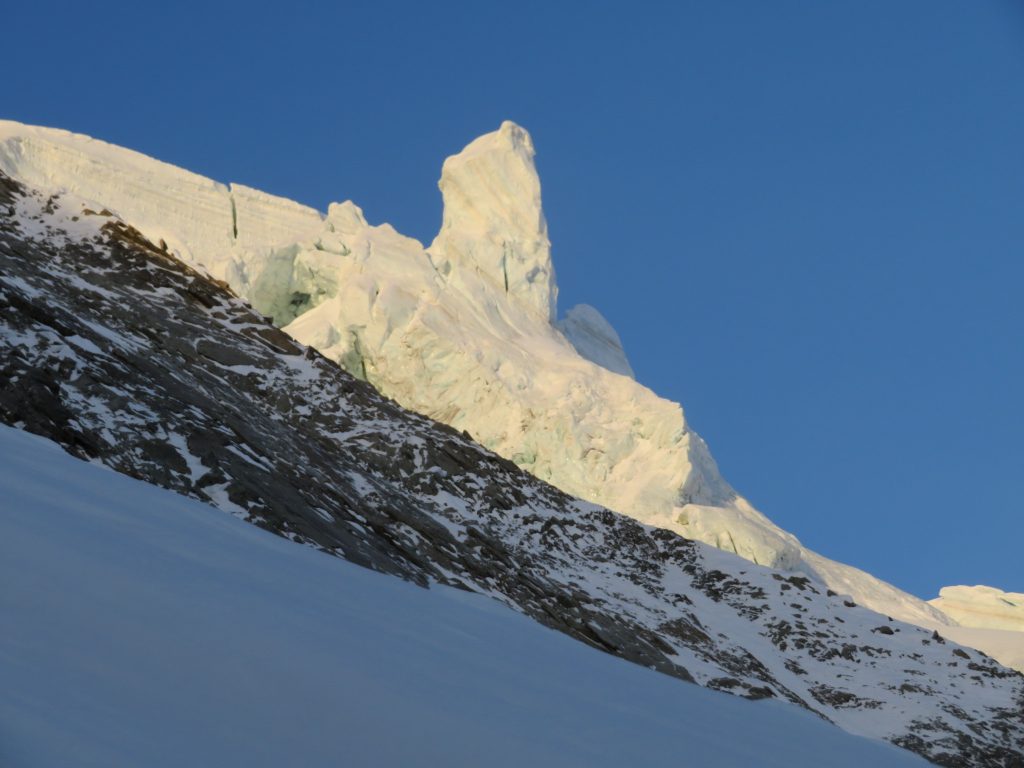 Serac below the Col des Jorasses.

Jorasses still kicked our butts on Friday and offered one last whiteout experience. This time our joked ‘mountaineering instinct’ kicked back and we made it to the Planpincieux bus station under two hours despite bad visibility. Even catched the first bus of the day to Chamonix! That went better than planned. ?