Guardians of the Galaxy – Skjomen 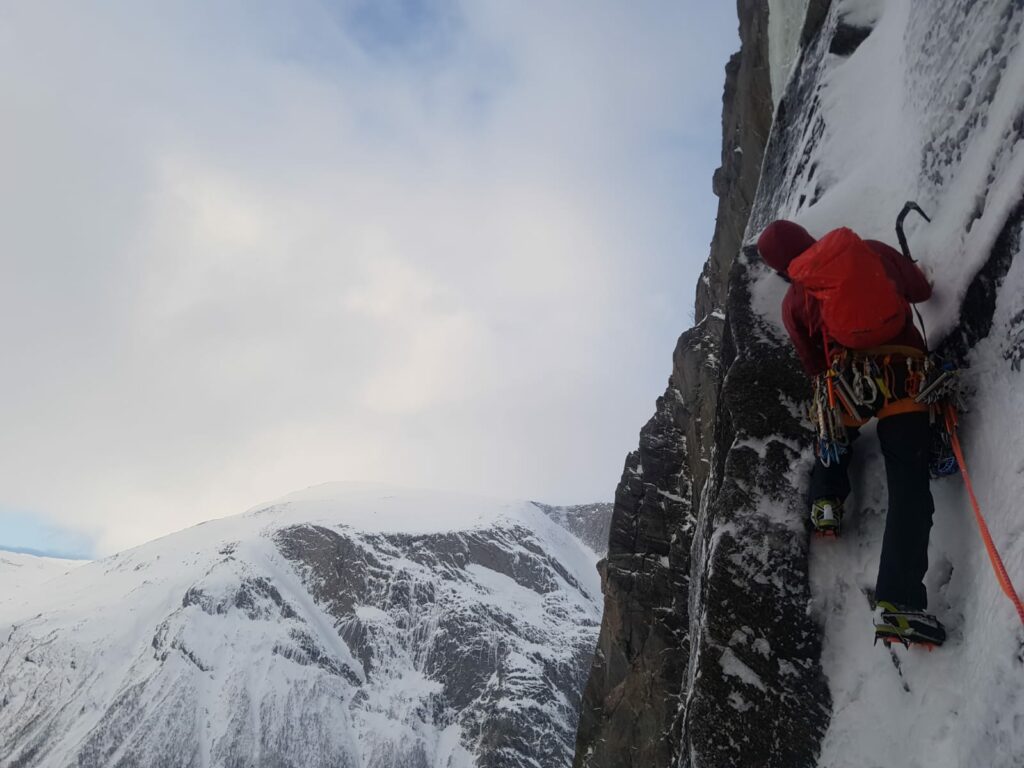 I have been struggling to write trip reports lately but last Tuesday we had a day out which reminded, that climbing is more than just a sport, at least for me. I see some artistry in it, especially when climbing new terrain without any information. When you have no clue if something is climbable or are you skilled and strong enough.

In the beginning of January, when skiing Gangnesaksla couloir in Skjomen, we spotted a hanging ice drip on a steep rock wall. It looked like a glowing dot in the middle of a black, steep rock face in a morning twilight. Would it be possible to reach that? 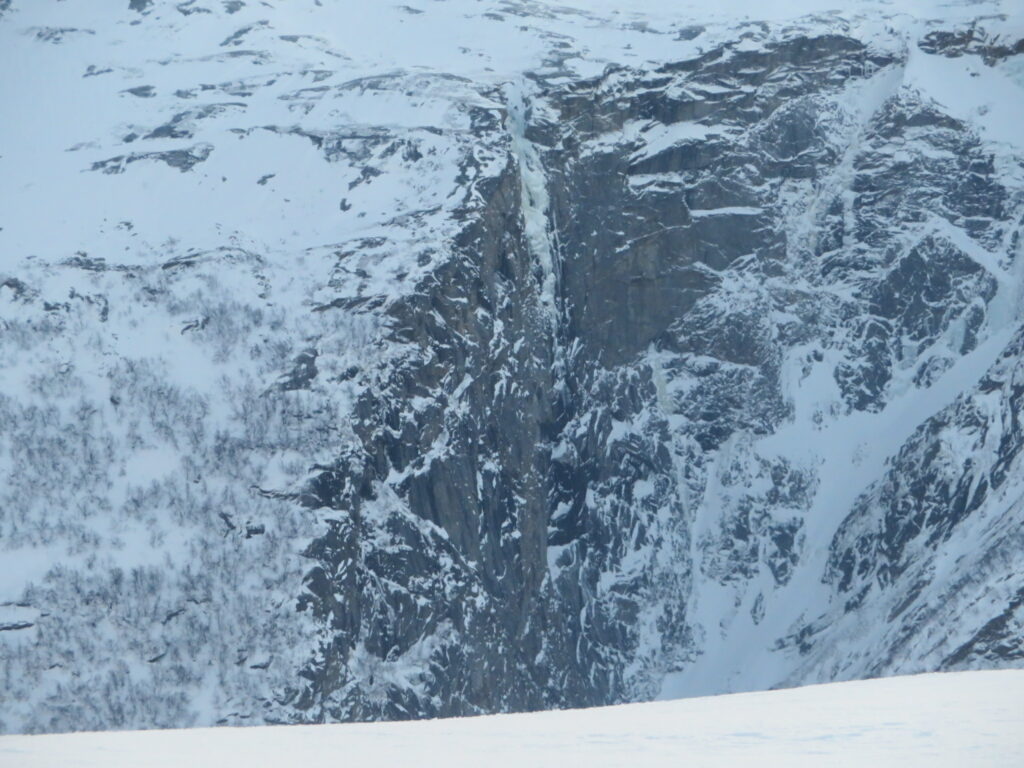 Earlier in the season we developed some new ice climbs around Narvik but when standing under most of them, we were able to say that yeah, we can climb those but with this line it wasn’t sure at all. That was a feeling I have been missing. Trying to solve a puzzle, connecting dots, dealing with uncertainty.

I got back from Chamonix in early February, just in time to do some shift pooling at work to get a few days off before the next snowfall. After doing Søylefossen, a Spansdalen classic with Marcus Loewen on Monday it was time to attempt the line in Skjomen. Climbing conditions looked amazing!

I teamed up with Sofie Eriksson, Narvik based skilled all around climber. On Tuesday morning we drove to Sør-Skjomen playing a soundtrack from the Guardians of the Galaxy. Listening song after song from ´60s and ´70s – beating a sound of a gusting wind which lifted up waves in a fjord and dusted the road with last fluffy snow which had not been flown away earlier.

The line is located in a narrow gorge in which the left hand wall rises steeply above your head while the right hand side is more mellow and vegetated. We made quick progress hopping on boulders and cramponing up firm snow. Gorge felt quite hostile in a way and would definitely be an avalanche trap in snowy conditions, with cornices looming above.

Our intended line didn’t look any easier from below but we decided to have a look anyway. Immaculate granite sheets looked almost impassable, but maybe there was a weakness that would let us reach that hanging ice.

We simul soloed a short snow couloir to the base of an ice streak, quite far right from the upper ice we were aiming for. Armed with a jumar, single and half rope, pitons, almost double rack of cams and loads of ice screws. Idea was to climb that streak and then try to follow a ledge system for a moment before trying to find a way through a rock barrier.

Already the first pitch set up a theme for a day. Run out traverses that were as committing for the second as for the leader. Rope stretching 60m pitch with some insecure sections warmed us up.

Second pitch looked steeper and would probably be the key pitch of the route. It began to snow when I climbed a few meters of ice to reach a horizontal crack under a roof. It was pure joy to see that we would have some foot holds too, not just a blank slab for the feet. Long reaches, hooking from a flake to another while traversing more and more left at the same time. There seemed to be a weakness to follow!

A short but quite physical and steep step formed a crux of the pitch. Gear was okay but quite far apart. Laybacking a mossy flake on the roof and lifting my feet high up felt quite involved for a moment but managed to pull it off and reached a clean crack to stuff as many good cams in as wanted, to make a good belay.

Spindrifts started to fall down granite sheets while Sofie seconded the pitch. Most of the time I couldn’t see her as roofs blocked the view but heard music she was playing from her phone and singing along. When she got closer I realised that she was climbing only with one axe and crabbing icy flakes while wearing mittens. I wouldn’t even be able to climb ice with big gloves on and especially not tricky mixed.

Now we were half a pitch away from the main ice but the terrain looked mentally challenging. Snow plastered rock with some ice blobs here and there that required gentle hooking. Stubby screw in a icy crack as a only possible protection I went for it. I knew that I could climb it if I shut my brains off for a moment but still it took some time to weigh risk versus reward. Sofie didn’t say much but I felt she had enough trust that it would be okey to continue. 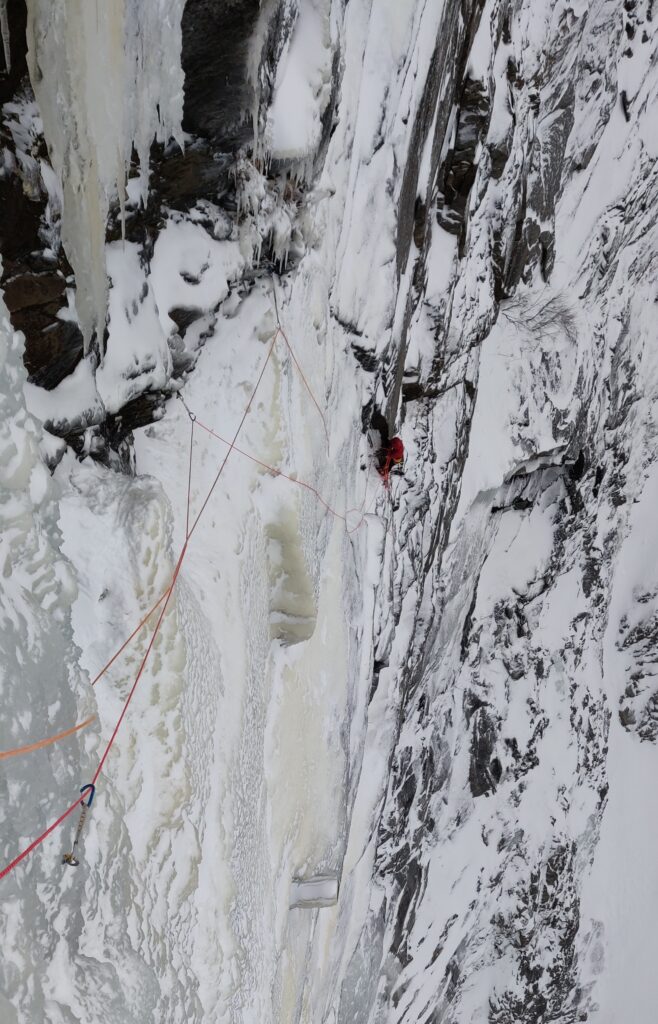 First secure tool placements on thick ice felt quite good. It went! But just. Probably a few weeks earlier it would have been impossible.

Exposure grew belly tingling as we climbed ice high above the gorge. In a way the ice we were on felt a bit harder than the terrain below or maybe it was just a mental exhaustion that was kicking in.

Late afternoon was getting darker as we neared the top. Sofie belayed me up the last pitch to a cave and said: `I just realised that I have climbed ice only once during last two months. Calves were burning a bit´. Quite a route to start spring climbing season! 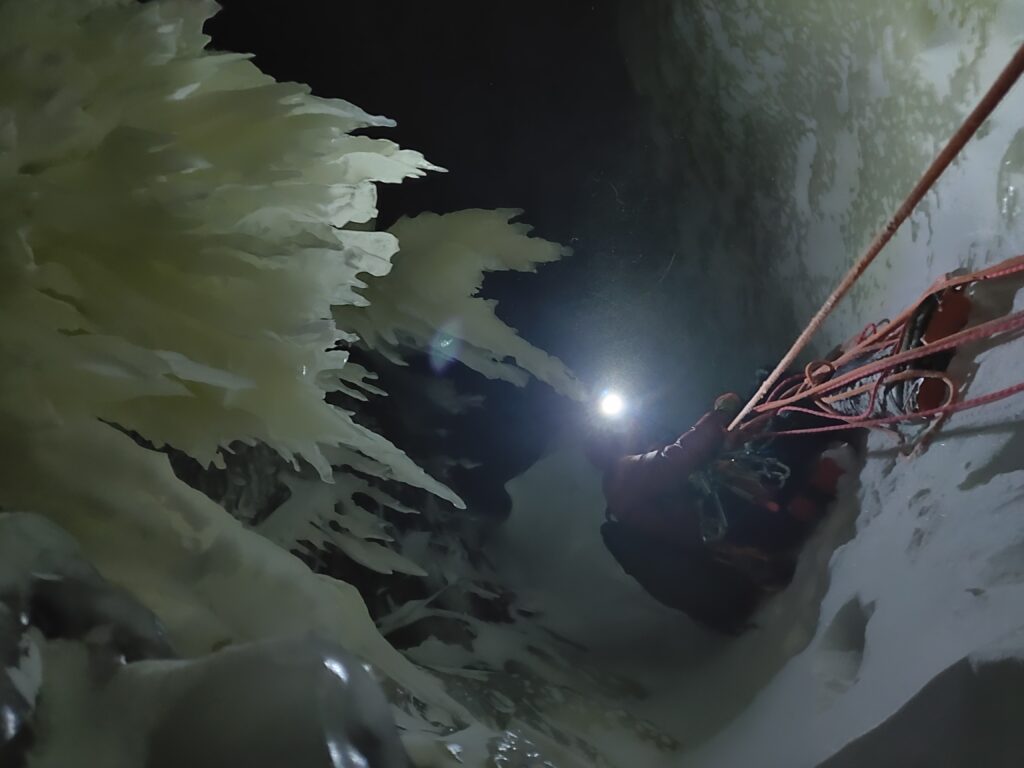 Lights of Sør-Skjomen below and fainth glow from a half moon above illuminate our descent. We decided to rapp straight down, hoping to find enough ice or cracks to build anchors. Rappels were a bit scary as terrain was steep and rock so compact that in case of lack of ice, we would need to do some more tricks to reach the ground. Luckily it went well and in no time we were back at the car, now playing songs from teenage years.

Such a day couldn´t end in any other way than eating pizza, having a glass of wine I brought from France and finishing up with some gelato. That`t how all alpine climbing trips should end. Now we’re on our backyard mountains but the whole day felt like being further away. Maybe in another galaxy. 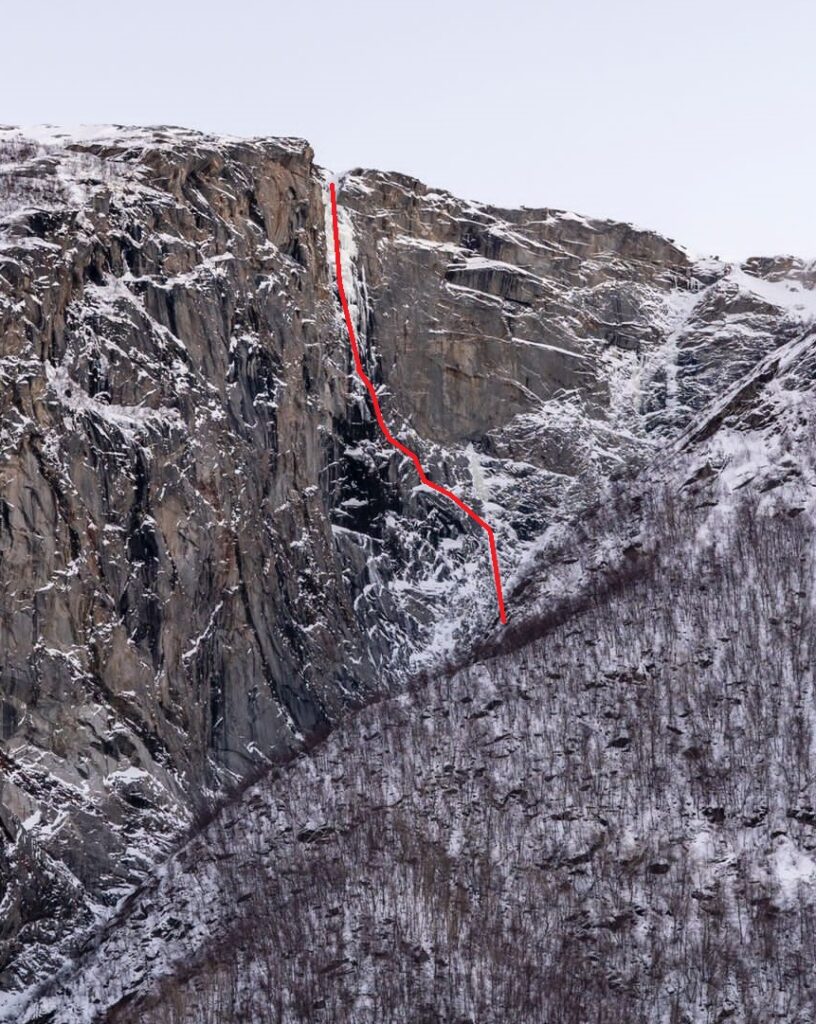