For years I’ve been avoiding to climb “Ginat” on the Les Droites N face. I always thought it would be a boring ice climb without interesting sections. And it’s very popular when it’s in fat conditions, which isn’t that good when climbing a direct ice route. After our hike to see black and powdery Grandes Jorasses on Tuesday we were struggeling to find out next objective. Then Sami suggested “Ginat” as the Argentiere basin seemed to be the most wintery place in the massif. Though, outcome wasn’t certain.

Long walk to the Argentiere refuge on Friday went well, but we still felt the GJ’s recce on our legs. Scouting the Ginat from the hut with my new camera revealed couple of thin sections which could bring stop for climbing. You are never going to know unless you try. 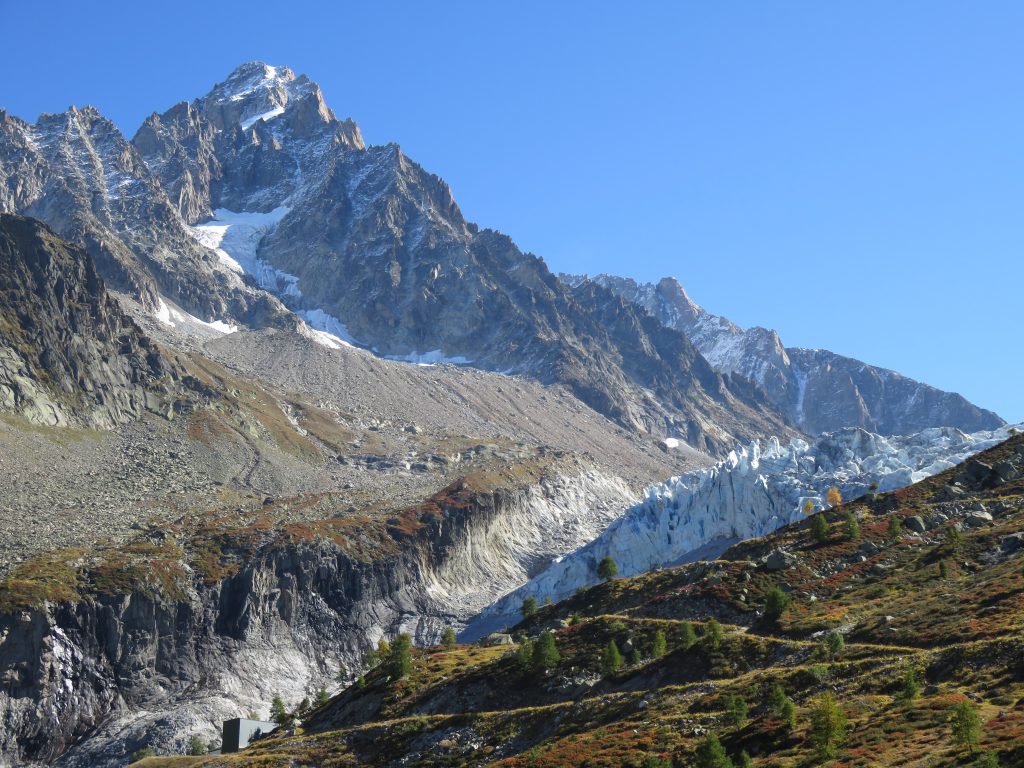 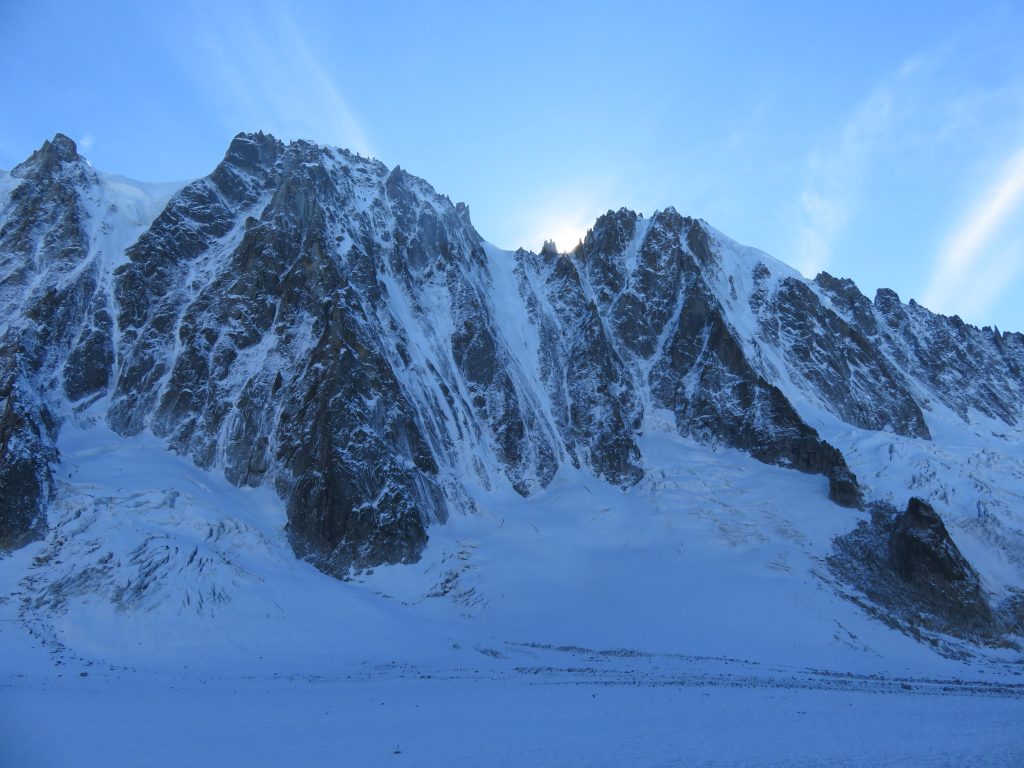 North face of the Les Droites and current conditions. 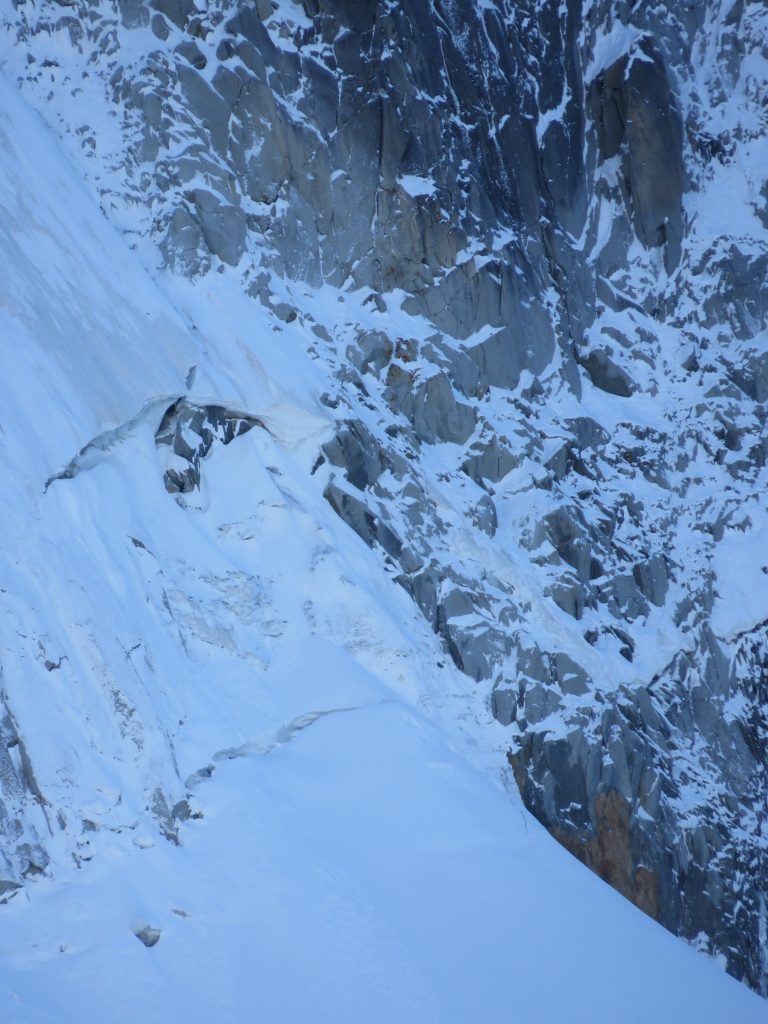 Three thirty start from the hut saw us walking slowly towards the schrund which was the first big question mark of the day. Afar it had looked horrible. After racking up I begun climbing and was pleased to find a ramp leading to the right under the overhanging schrund. I crawled through. We were on the face and the game was on!

Messner’s ramp offered spicy climbing on loose snow. There was no place for protection for 60 meters, but I felt secure with my tools despite the steep ground. I belayed Sami up and said that hopefully that was the crux of the day. Easy angled mixed ground brought us to the big icefield and ended my first block of leads.

We romped up the central icefield which seemed to last forever. Heads down and up we go. Now we were able to see and feel the true scale of the route. 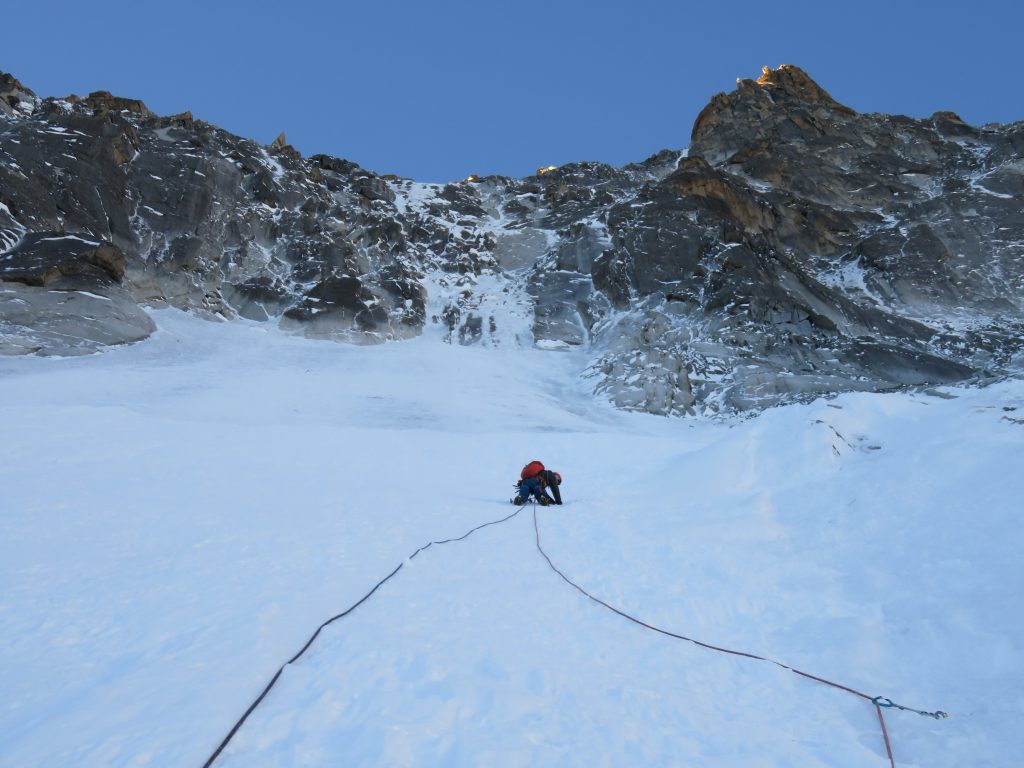 On the big icefield.

Sami led steep and brilliant ice pitch and I took the mixed ramp. Short after we encountered thin vein of ice, only 70cm wide. I gently tapped my way up. Climbing was good and almost enjoyable. Cold wind kept us chilly enough though. 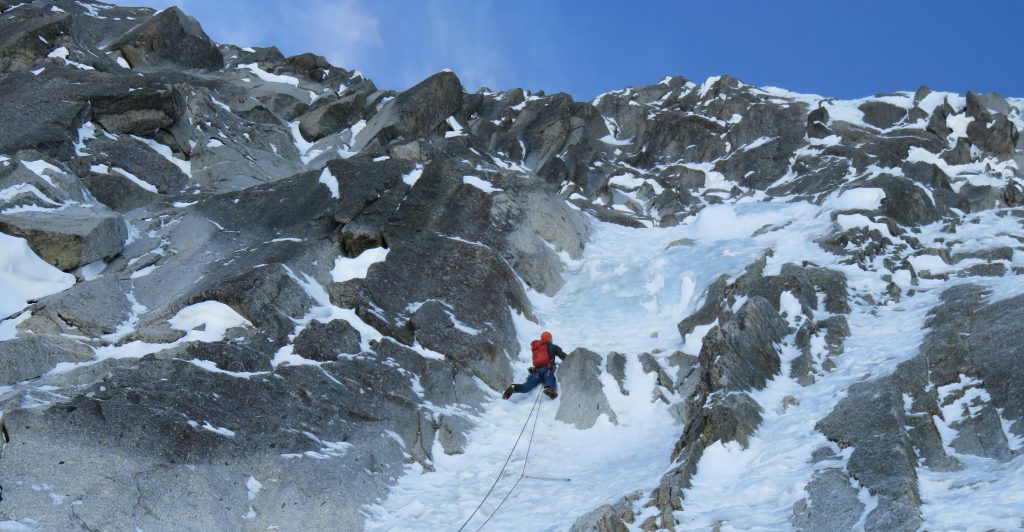 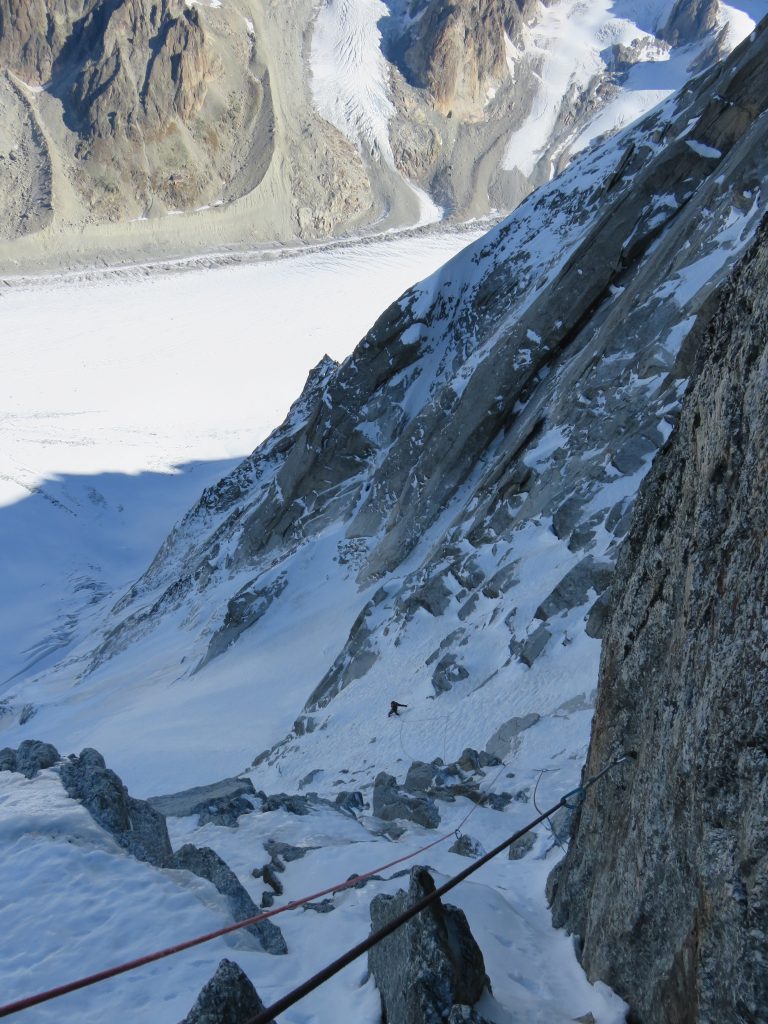 Sami follows as we simul climb the mixed ramp.

The crux wall high up was pure ice like the most of the route. Exposure grow on every axe placement. Situation proved to be much better than I’d imagined. Last 100 meters of mellow terrain went quickly, but the joy of reaching the breche was short lived as I looked down the descent couloir on the S side. Couloir from the nightmares. Sami followed soon after and had very similar thoughts. The day was far from over. 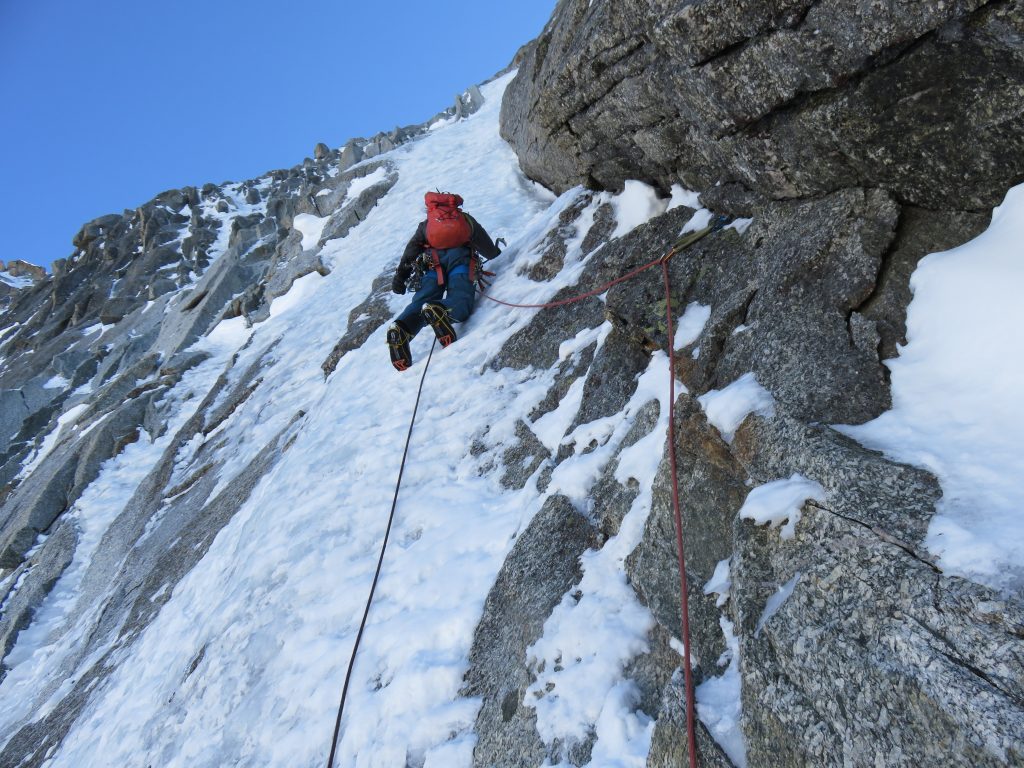 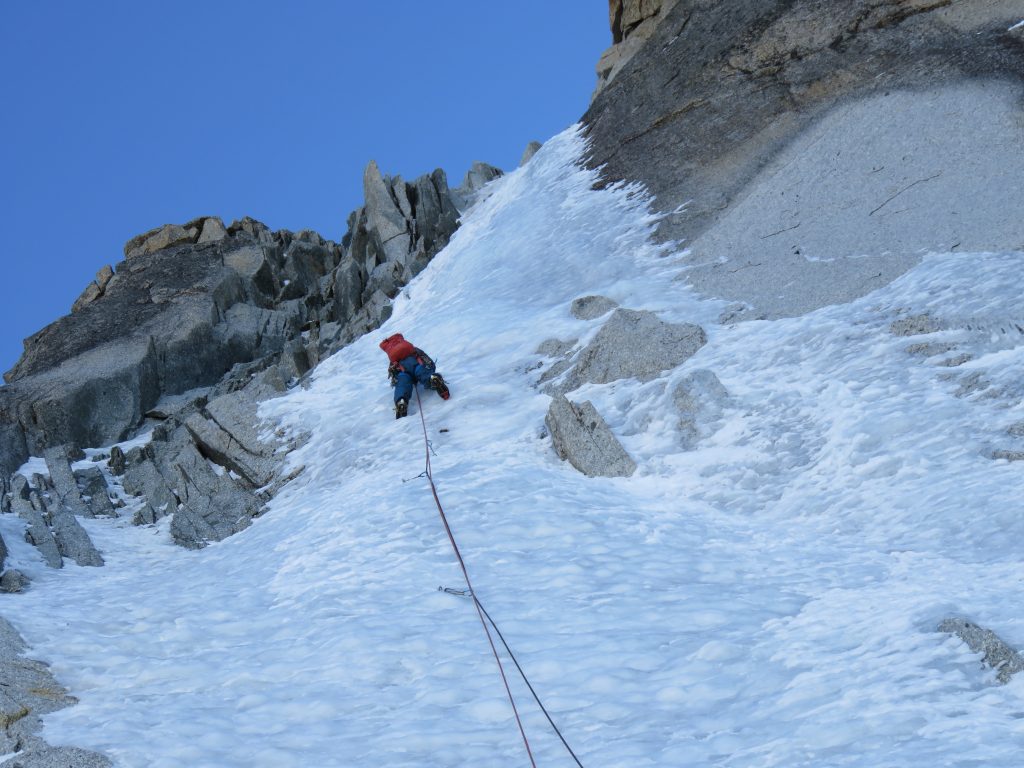 Steeper ice in the end.

It was obvious that we had to be super careful while rappelling as anything falling from above would go straight down the couloir we had to rappel. Of course rope got stuck on first two rappels. Both times I climbed up to retrieve it. Nerve racking gamble not to touch any loose rock. 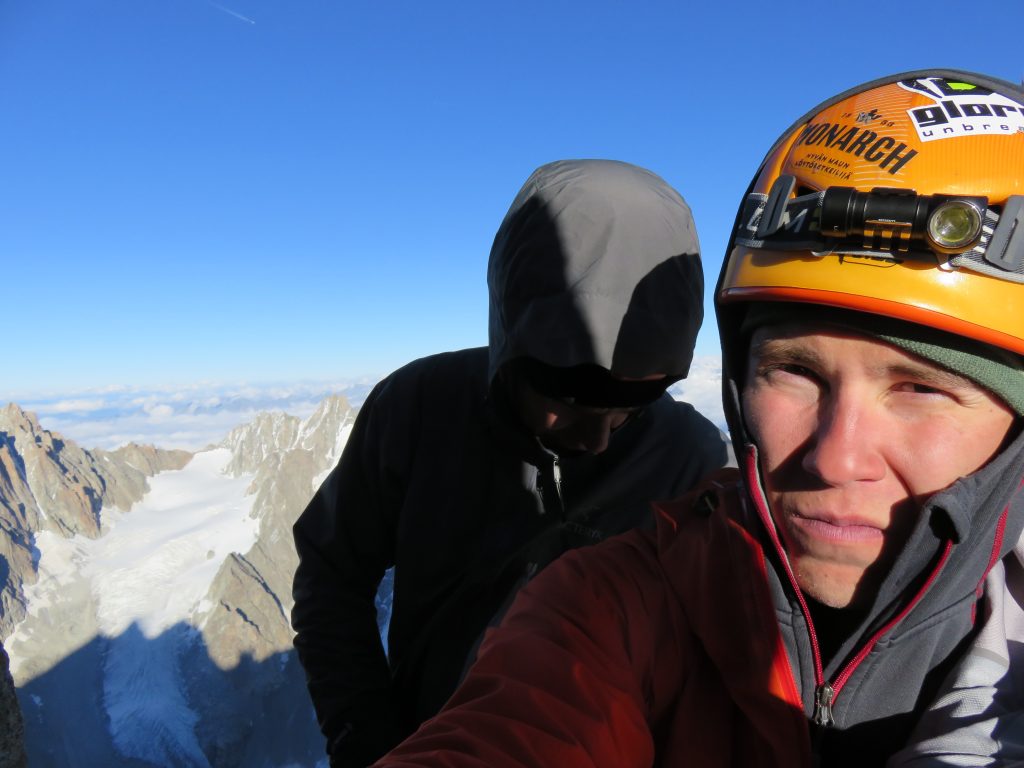 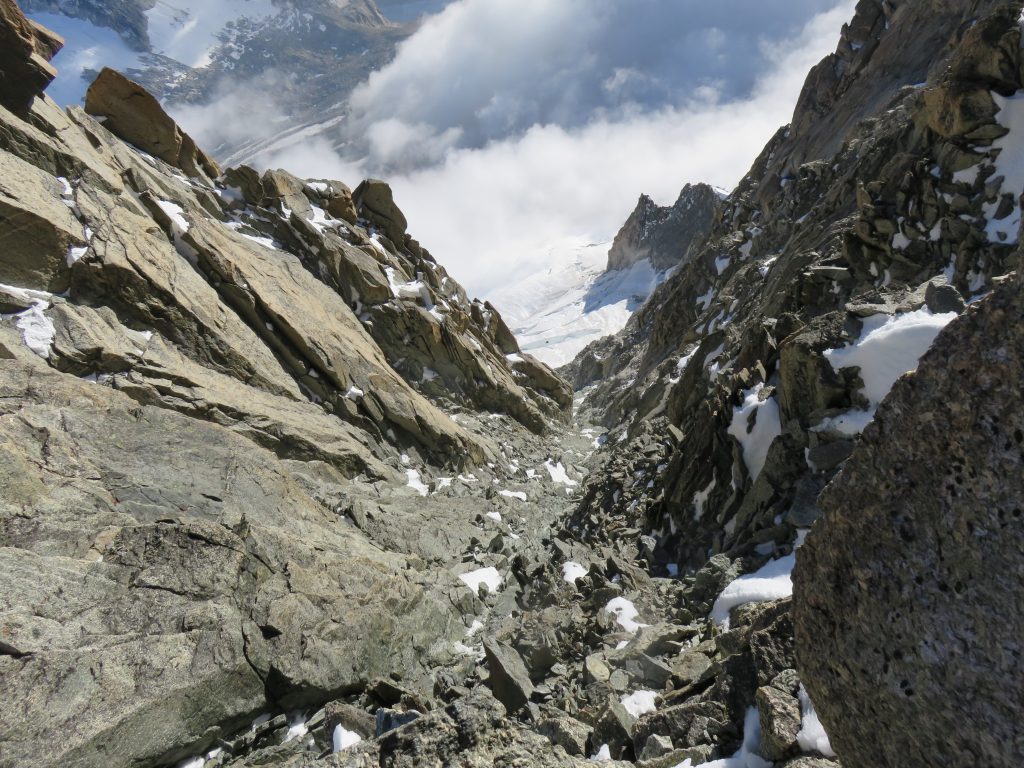 It got dark soon. Once the rope sent down some rocks and one of them hit to my arm making it hurt quite a lot. Luckily no broken bones, just a hard hit. Sami led the descent very well. When he rappelled, I wasn’t attached to the anchor for safety reasons. I think you can understand why. 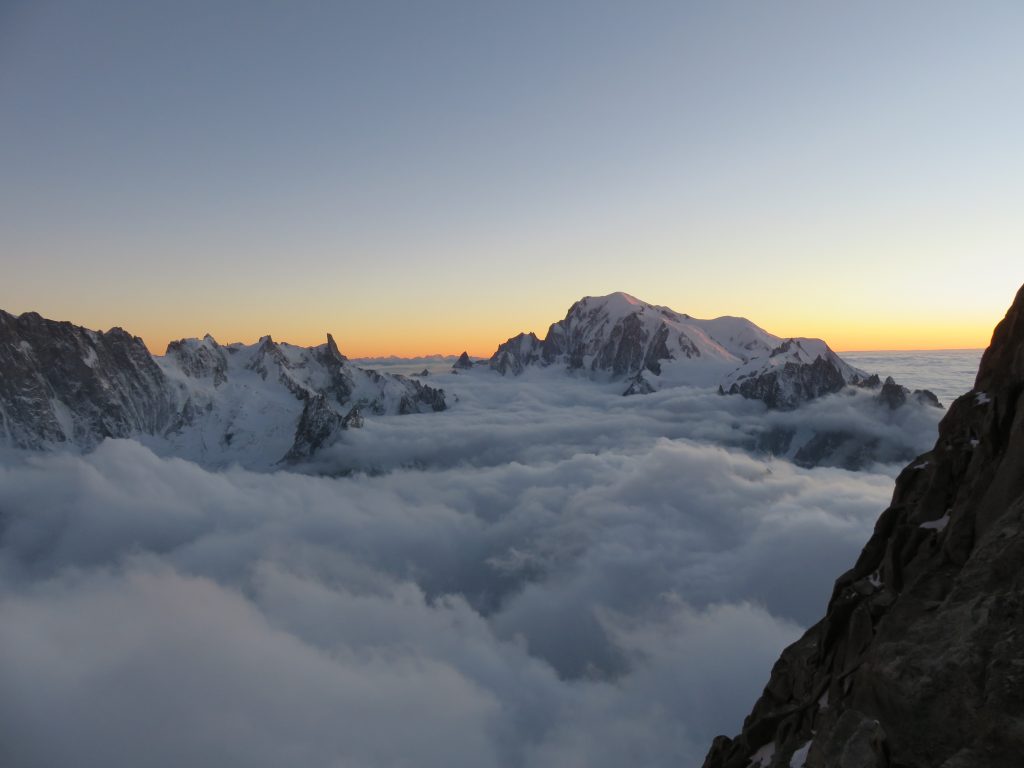 Finally we reached the glacier, but the game wasn’t over yet. Down climbing and rappelling over the massive maze of crevasses last ages. One last rappel off from a red camalot brought us to the flat part of the glacier. And then whiteout begin!

Rock slabs, climbing back up, reaching the Talefre glacier, going back and forth trying to find the path to the hut, standing in a cloud, more slabs and after almost giving up our hope to sleep in a hut despite the GPS!! we found our way out from the Talefre glacier. It didn’t take long to fall asleep in a winter refuge of Couvercle. I’d say quite alpine descent and rewarding way to climb such a popular route. It’s a great line afterall!