Two of the biggest, hard summer alpine routes in the Mont Blanc massif that feed my dreams are Divine Providence on Pilier d´Angle and Manitua on the north face of Grandes Jorasses. Of course you have harder rock climbs, longer ridges and link-ups, but for me, those two are the main reasons coming back to the massif in summer. Probably I will return again and again for granite cracks, but dangerous game of summer alpinism could be put in hold after climbing those two. 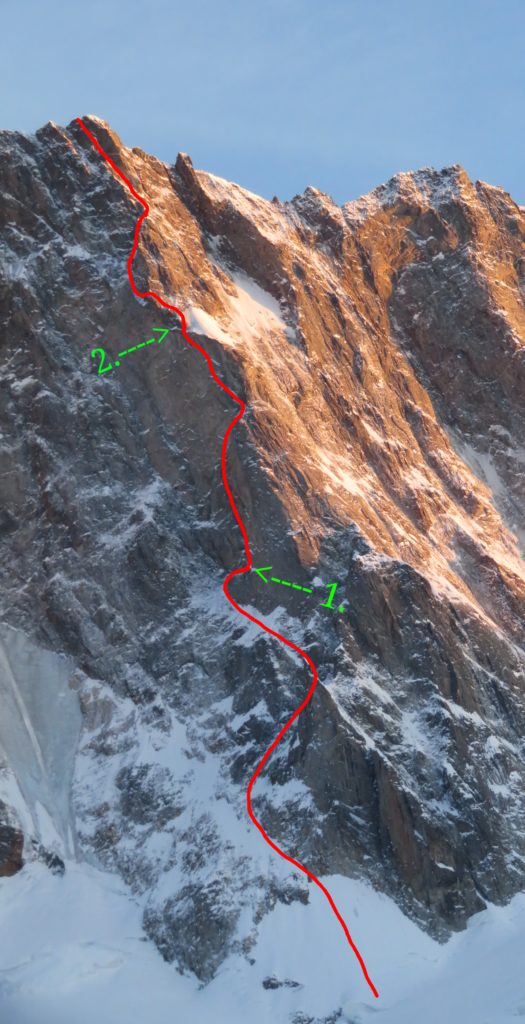 Line of Manitua with our bivouacs marked.

After soloing Peuterey Integral in late July focus was more in low stress rock climbing rather than in big alpine, but as always, hunger grows and you start to be more restless. Divine Providence was out of the game in late August, but for Manitua conditions could be actually be quite good.

Several day weather window was approaching and it would begin with a quite cold and cloudy day. A perfect opportunity to climb exposed lower part of Manitua without getting too scared with rockfall. Luckily Sami Modenius was ready for a big climb! Also my Chamonix flatmate Samuli Pekkanen got super stoked about the route and asked if he could join us. With his big wall experience our team would be stronger as nature of the climb kinda forces you to haul and aid some pitches. Except if you are climbing 7c free, on big and scary alpine face and doing it quickly which most of the people won´t. 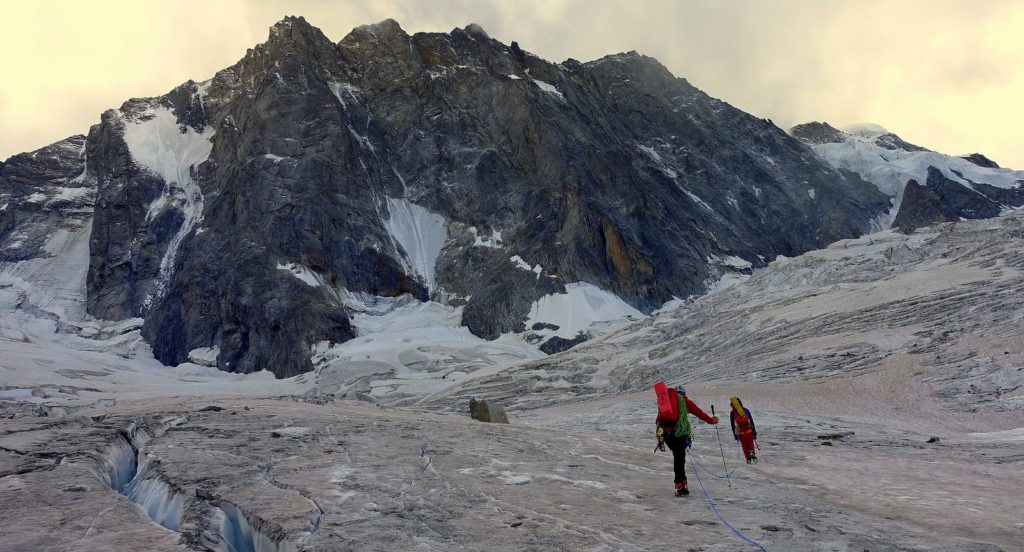 In summer 1991, a legendary Slovenian alpinist Slavko Sveticic managed to find a line of weakness through the blankest part of the N face of Grandes Jorasses. He climbed for three days in a shadow, establishing a route called Manitua, named after his friend, whom died on the same face a year earlier.

With Walker Spur, Manitua is the only route that gets ascents regularly in summer. There are few others rock routes like Le Nez, but they are off the radar. Jorasses is after all the arena for biggest mixed lines in the massif.

Manitua had a period when it got just winter aid ascents but since summer 2015, when Korra Pesce and Tomas Muller did the first one day ascent, it has turned to be more popular in summer. Dry summers and bad mixed climbing conditions have forced keen Jorasses climbers mainly to Walker and Manitua, other routes being out of condition most of the time. 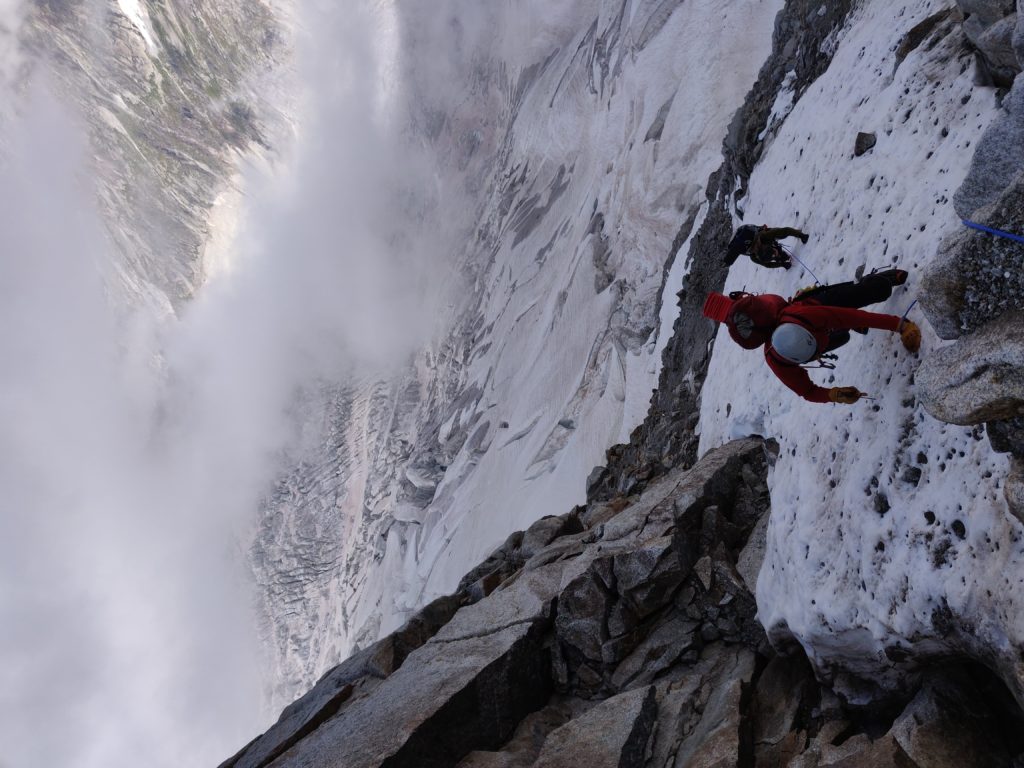 Low angled snow at the start.

As a team of three we headed from the first Montenvers train of the day towards base of the Jorasses on Monday. Walk in was fastest I have done, as glacier was mostly free of snow. Big streams were running high up on the glacier showing the rude effects of climate change. We took the rope out for the last hour for the crevassed part before launching to the face around 13:30.

First 400m to the base of the shield were horrible loose show of choss. We had to climb carefully and ended up pitching almost the whole lower part. Simul climbing would have been too dangerous at times, but due to cold and cloudy day the whole face was death silent, which was perfect for us. No rockfall! 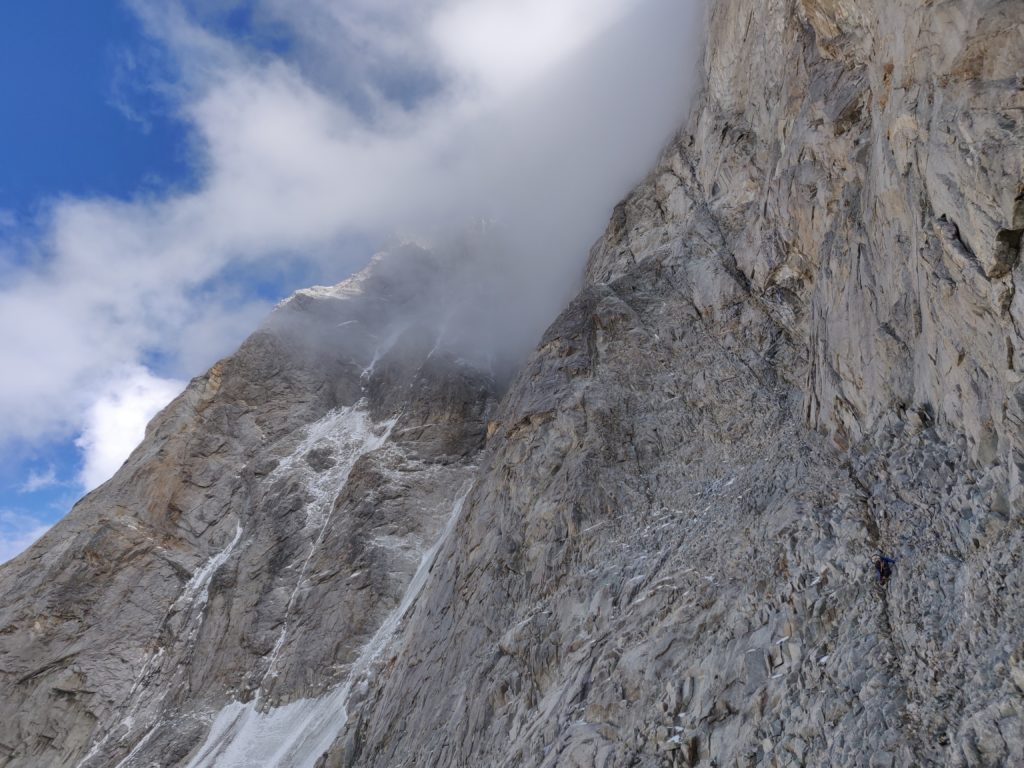 Ambiance! Loose traverse under the shield. Can you spot Samppa?

Climbing itself was very easy. Last pitch of the day was one move 5c which is a variation to avoid 6c death slab. Variation makes also much more sense and doesn´t feel forced like the original start.

I don´t know why topo doesn´t mention mega ledges top of the first pitch of the shield, but those might be the best place to spend a night on the whole face. We were able to fully lay down and relax while moving clouds gave some extra ambiance. 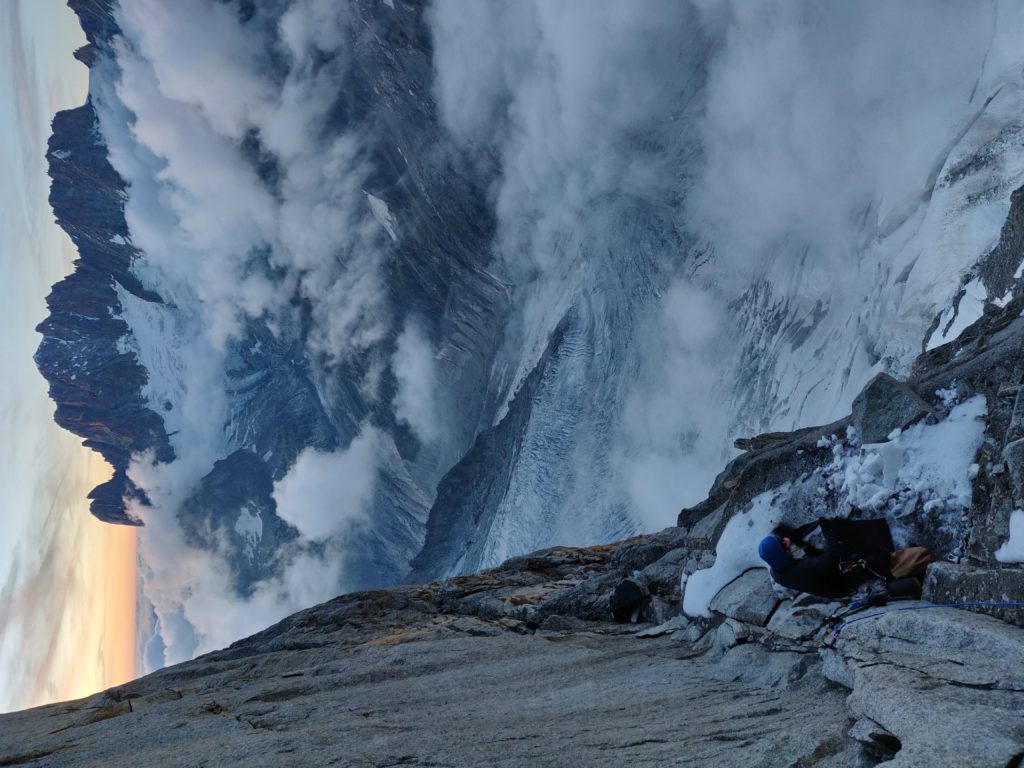 Best bivy on the face? 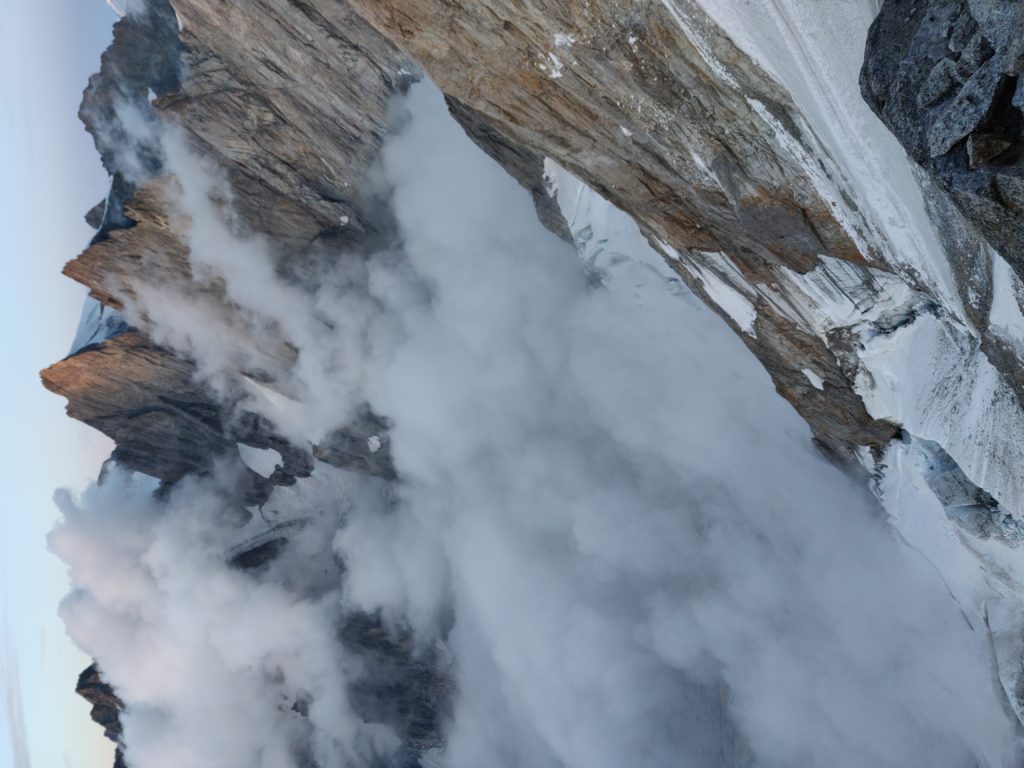 After midnight we were able to see line of headlamps on the glacier heading for Walker Spur. How much better it would be to start climbing straight from the bivy and avoid tiring approach at night? Much better!

Sami took the first lead block in the morning when sun hit the shield. We had an hour of sunlight before shadows of the N face were upon us again. Sami led three 6b pitches in a big corner with some verglass or shorth wet sections at times. Nothing too bad for a big alpine face though.

Sami heading up on the first pitch of the day. 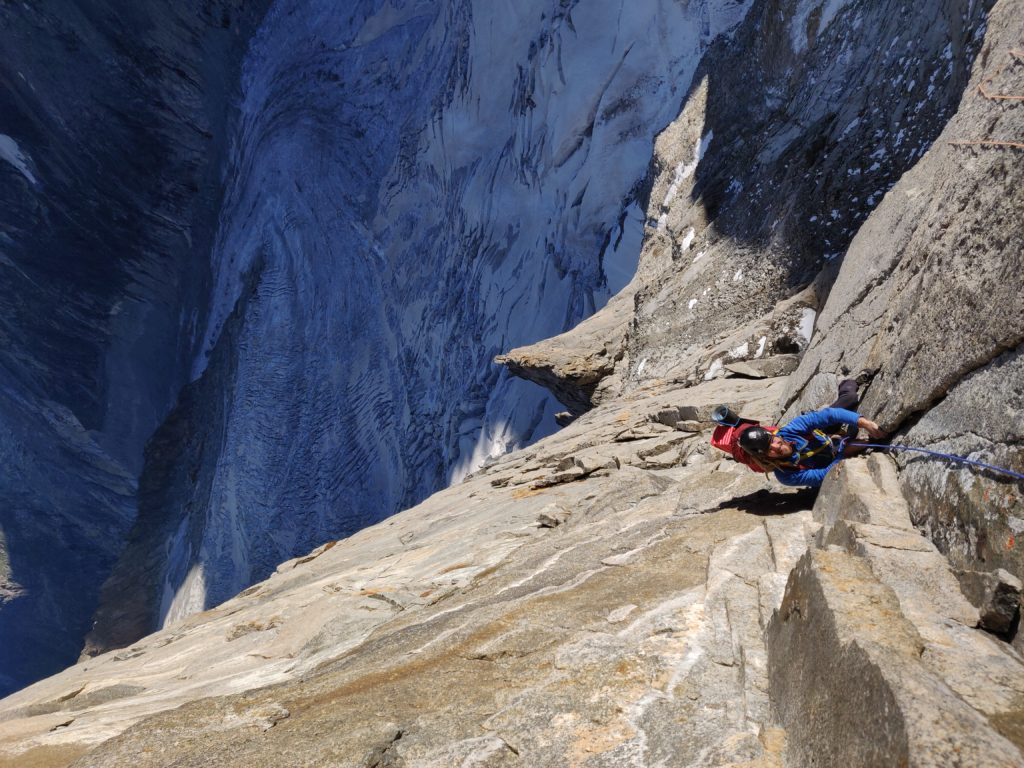 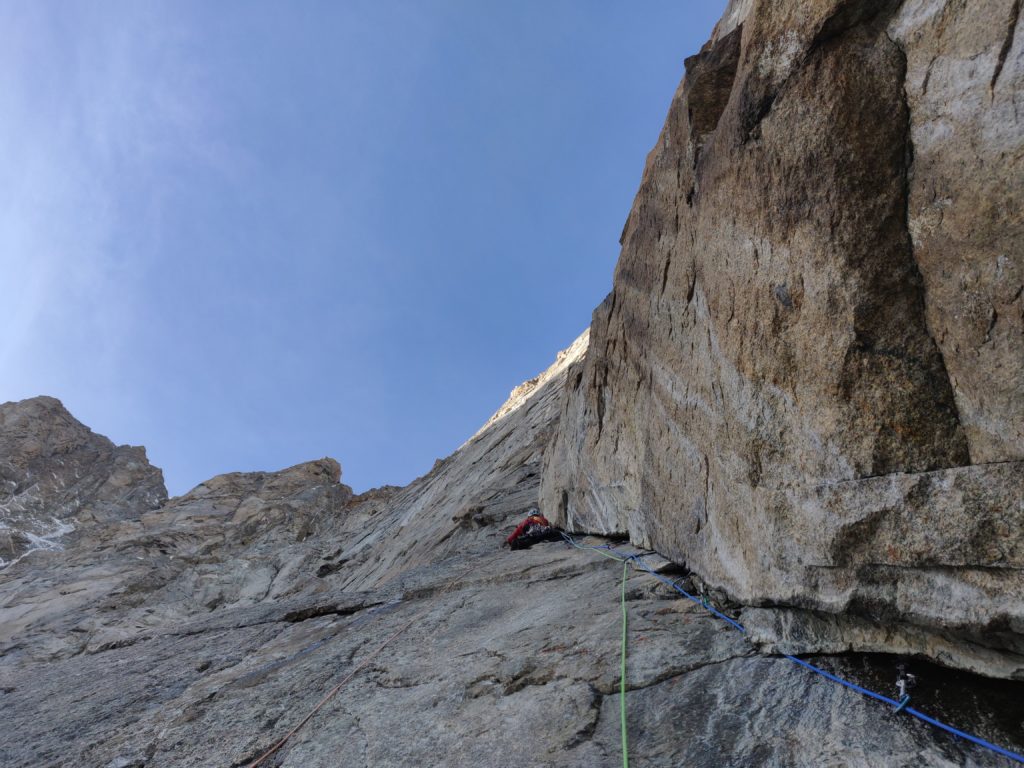 Leader climbed without a pack, he would haul most the gear with a tag line and seconds climbed with quite light packs. This system would continue top of the shield.

I took the second lead block for few overhanging 6c/+ pitches that in my opinion had the best free climbing on the route. Amazing big holds on a wildly steep terrain. I also did the ramp to the start of the last part of the shield where Samppa started his block. 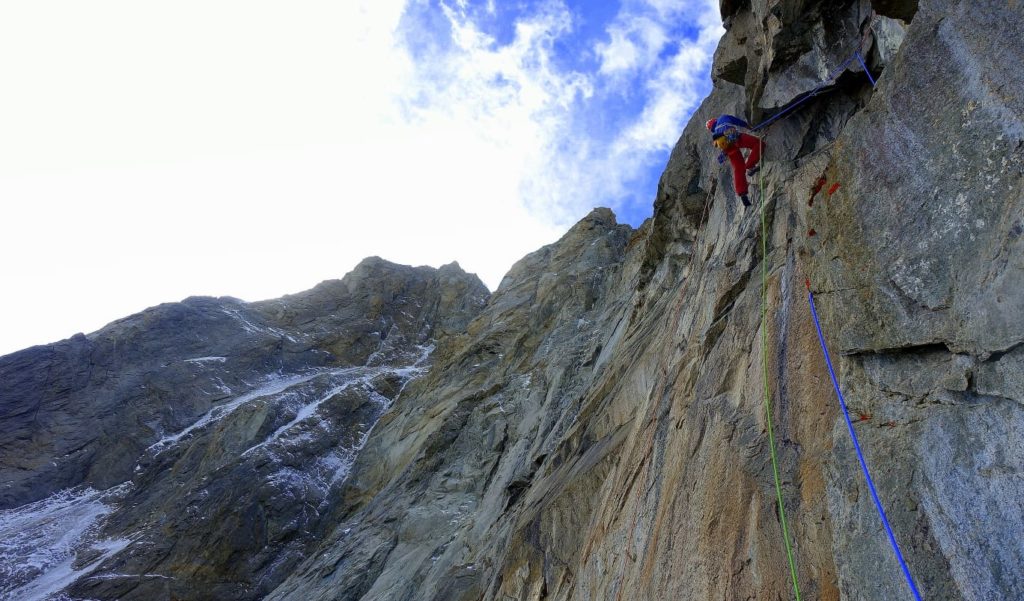 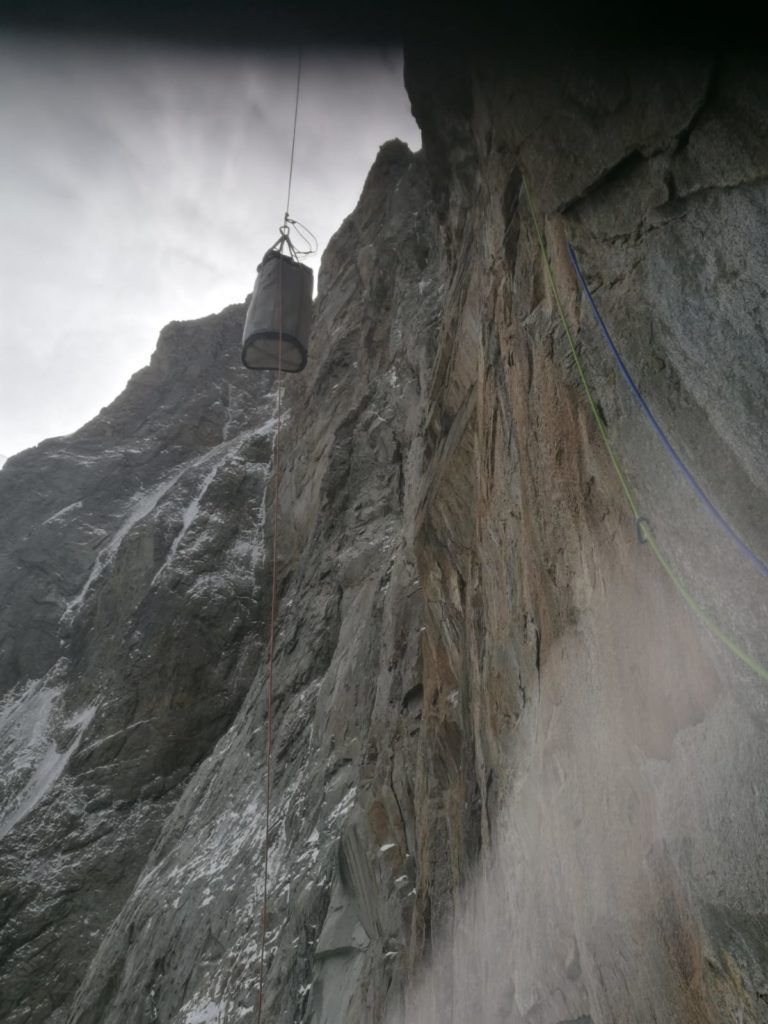 Some 6b climbing led to a bold 7a pitch which was climbed with pulling pitons and cams. It was already quite cold and free climbing wasn’t the first priority. I had climbed everything free until that point but that 7a looked quite uninviting with micro crimps.

Again some easier stuff before we were under the crux of the route. It was also the last pitch of the shield. An overhanging wall guarding exit to easier terrain. Ground under out feet dropped 400 meters straight down and base jump would have been more than possible. 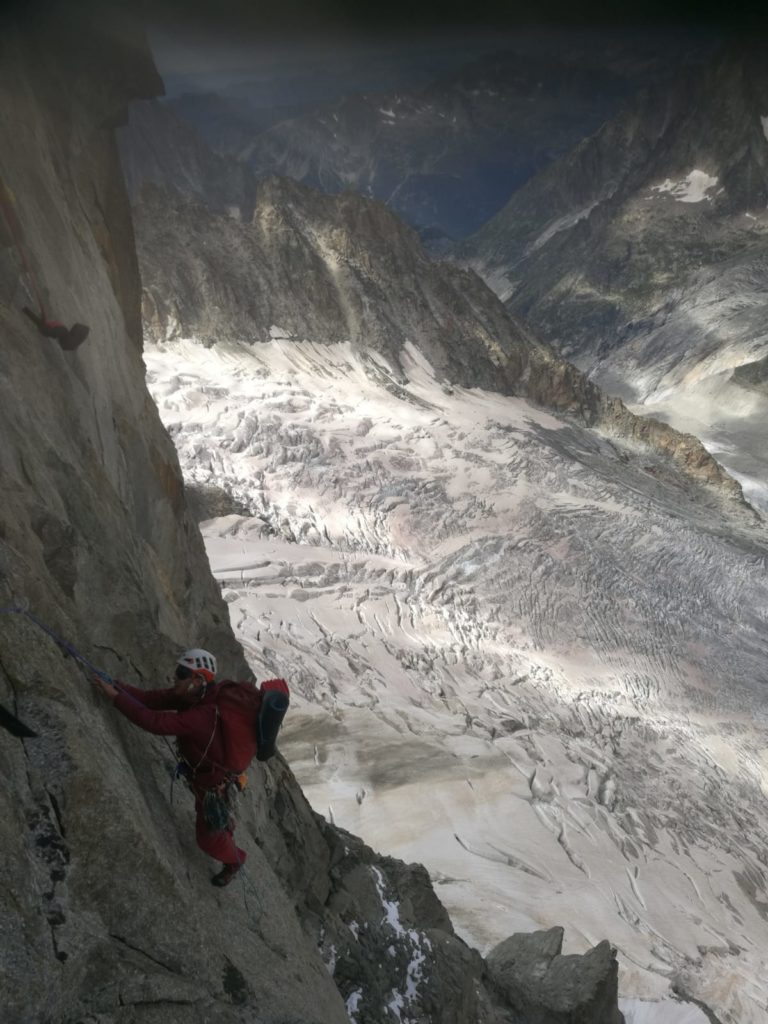 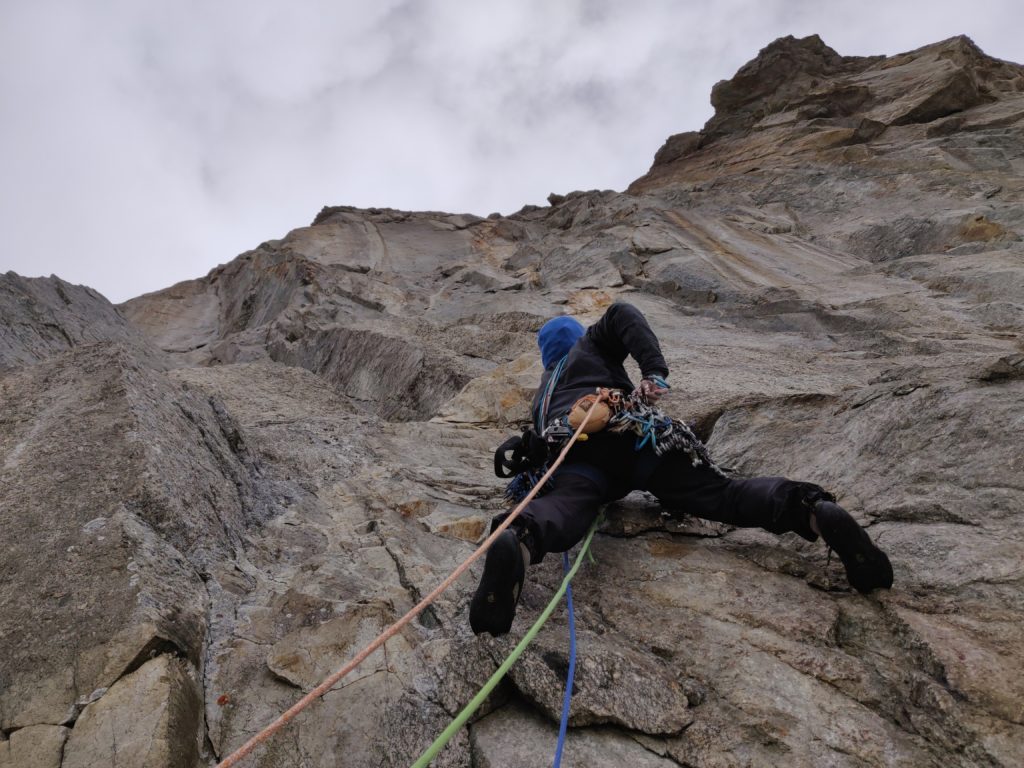 Samppa leading higher on the face.

We had two options. To do original A3 exit pitch of Manitua or climb the last 7c pitch of Le Nez which is more often done nowdays. Samppa went for the latter and had a proper battle up it with mixture of free and aid climbing. Luckily we had some peckers and pitons with us. It should have been 6c/A1 but even moves to first in-situ pitons were tricky, risking a painful fall to a sharp edge.

An impressive lead which made first on-sight go of the pitch by Symon Welfringer few weeks earlier to look quite an achievement. 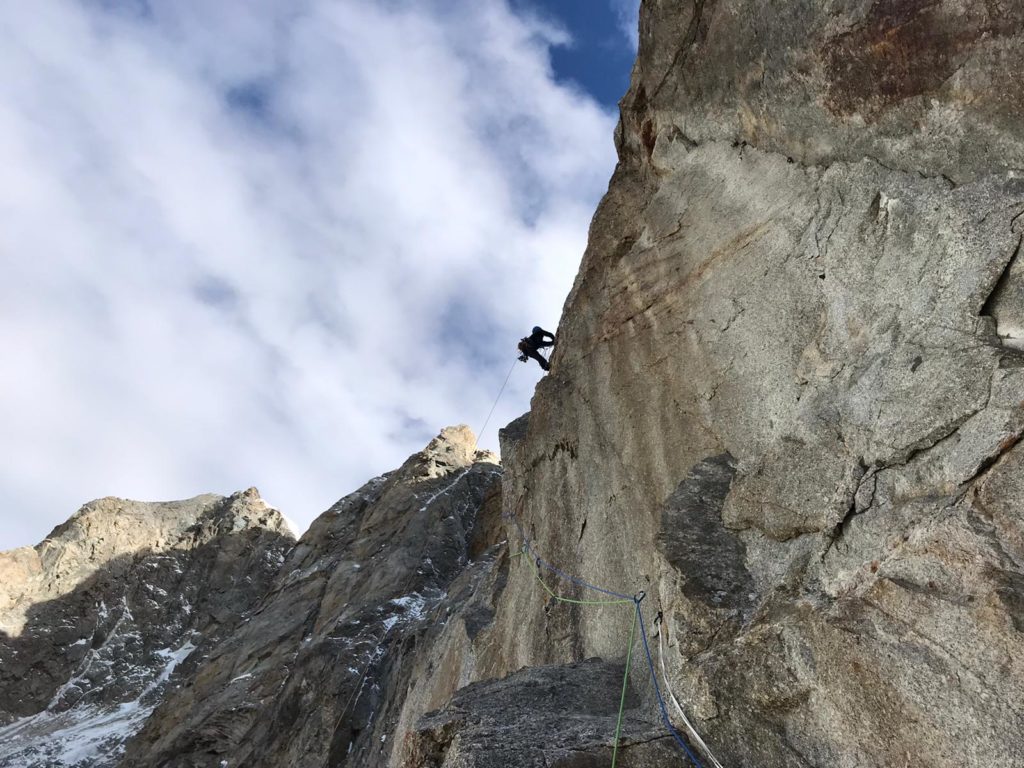 We still had daylight left but wind had picked up and we were risking a very windy night on the summit if we would continue. We wanted to go down from Pointe Walker to avoid loose rappels from Pointe Croz. That would mean climbing few hundred meters of a ridge in a dark in strong winds, so best option was just to find a bivy and take it as a training for bigger mountains.

We found a small cave left from a top anchor of Le Nez and dug it deeper and better for two people. Samppa was able to sleep on a ledge ten meters higher while I and Sami played cavemen. The bivy was quite good and protected from a wind, though changing position at night was hard. 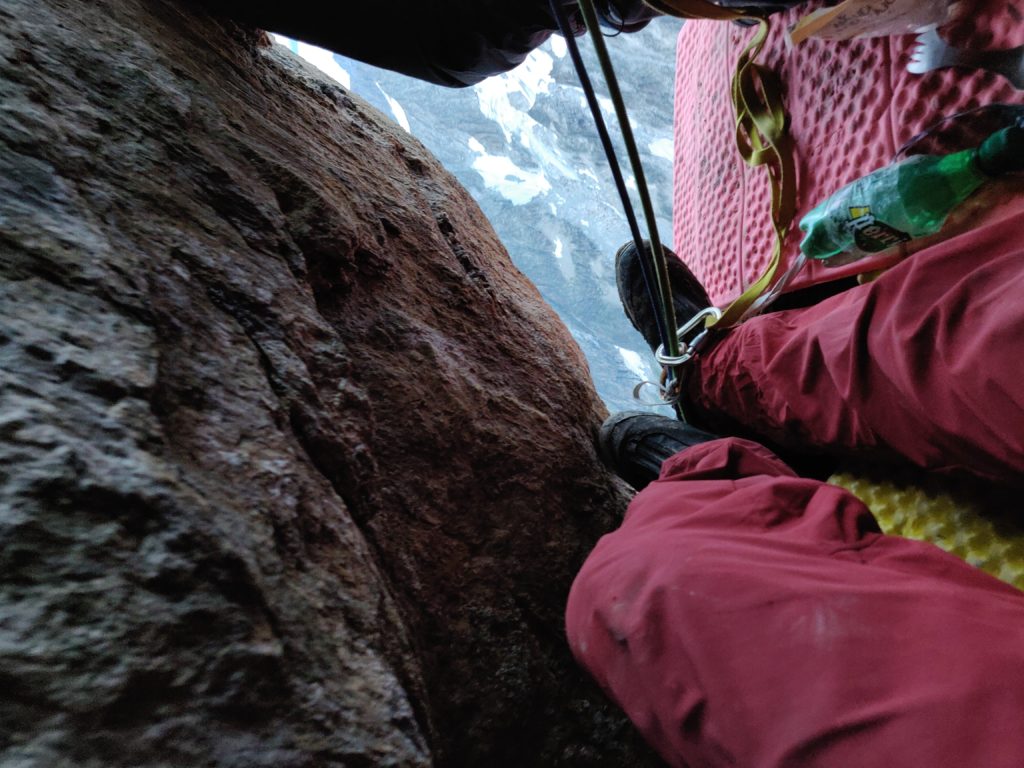 Second bivy in a cave.

On the next morning we started following the original line of Manitua through some loose mixed terrain until we joined the Croz Spur at the notch. I had done the last part in spring 2019 with Etienne during our ascent of the Croz Spur, so I knew the last three pitches quite well. That time pitches felt really annoying and slow with snow, but now they were climbed quite fast with big boots and bare hands. Temperature was close the same though as wind raged strong around us. Situation was wild, the N face dropping 1000m to the glacier under our feet, conditions were alpine say the least and climbing interesting. I was happy to pull the last moves to the ridge out of the shadows, to the warmth and calmness of Italy. 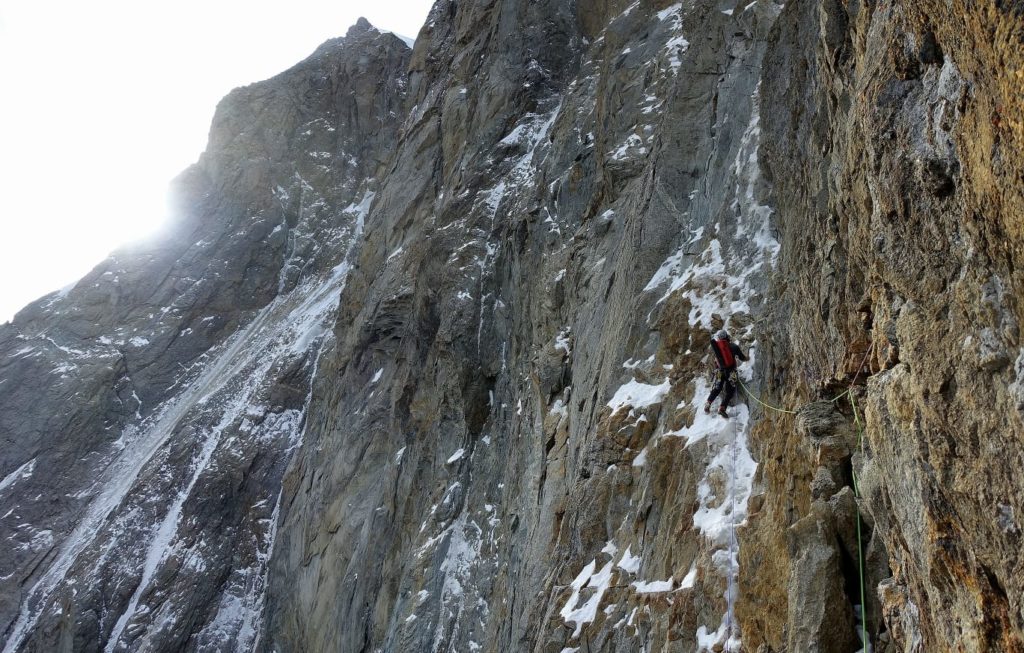 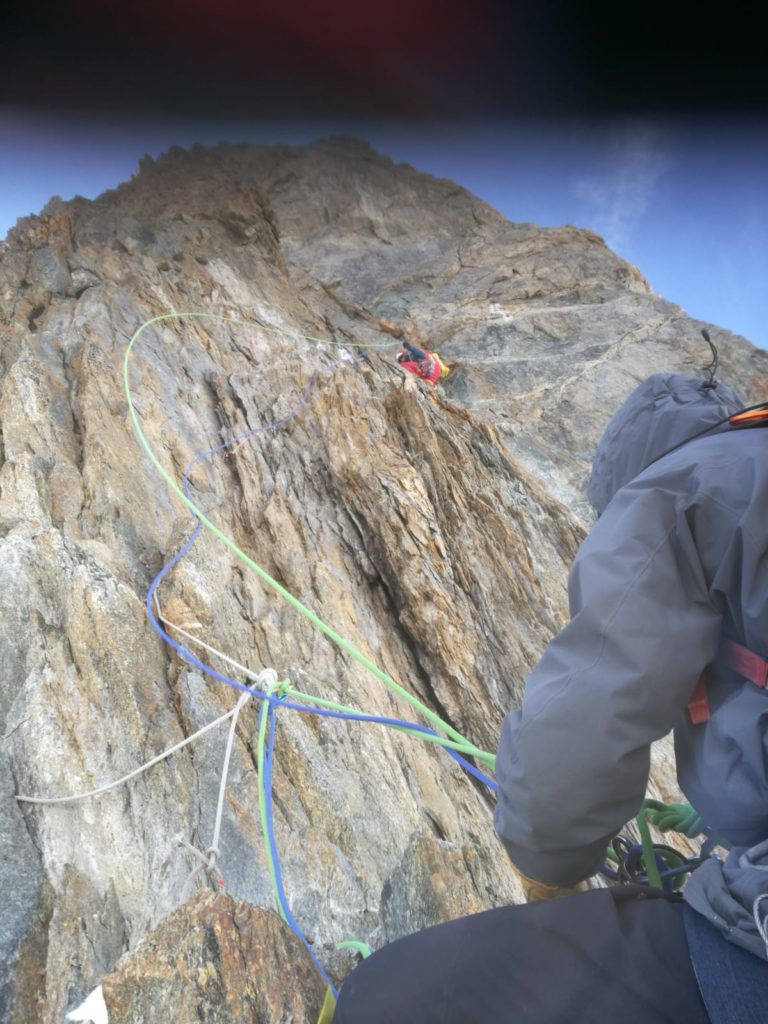 Ropes singing in the wind. Picture by Samuli Pekkanen.

It´s a relieving moment to top out but at the same time intensity of the N face disappears. Of course you still have a long and chaotic descent to Planpincieux ahead, but once again you managed to escape the dark and lived some of the most powerful days of your life.

Jorasses knows we will be back. We will always return with hunger of something harder. In search of a journey back to the light.

We summited Pointe Walker and had a quite uneventful descent down to Val Ferret. It´s long and very alpine but you lose altitude so quickly, that in six hours you are back in the green forests of the valley. 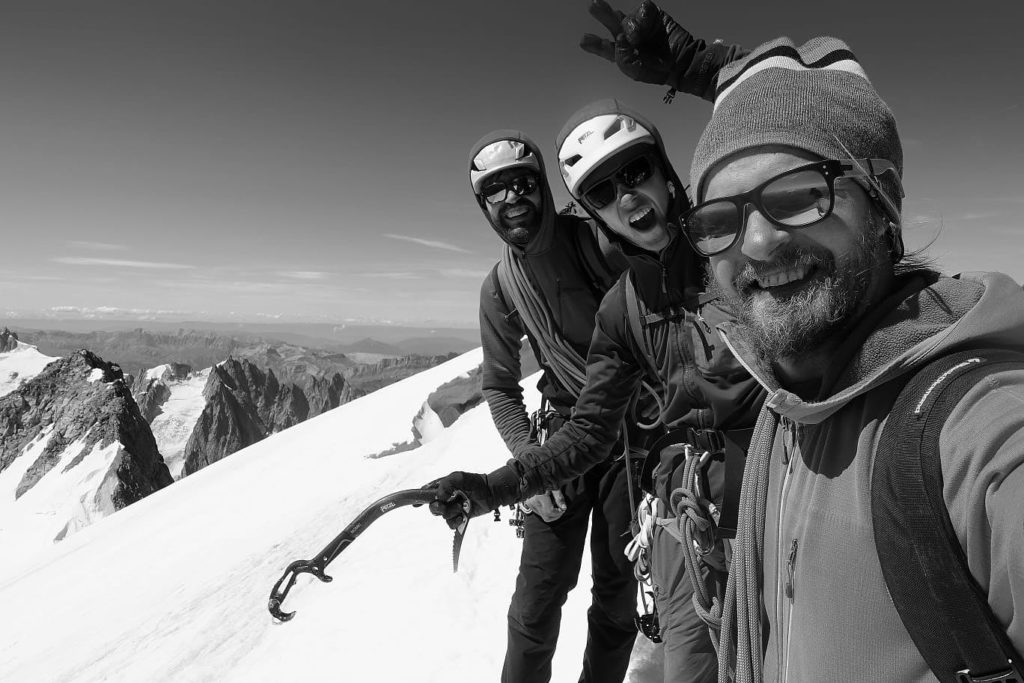 Manitua was my fourth route on the face, Sami`s third and Samppa`s first. I certainly hope that some time in the future face turns white again and allows us to follow it`s thin ice smears. Until that time, the Jorasses fever has decreased, if it ever fully does. There´s no wall like it in the World!