Pointy granite towers, powerfull storms, loads of walking and alpine trickery! I and Sami Modenius spent five weeks in funky El Chalten at the begining of Austral summer. Period between mid November and Christmas set out to be only possible time to go this year as in January other mandatory things keep me in Finland.

Early season means less people and more ice and mixed objectives which felt great after so much rock climbing in summer. Though, we were hoping to do both! Trip was my first and Sami´s second to the area.

We arrived to El Chalten on 17th of November. After one restday we headed to the base of Supercanaleta in 6,5 hours from Rio Electrico’s bridge. Approach conditions were superb and route looked to be in also. Unfortunately winds were stronger than expected. Night in a small bivy tent on Glaciar Fitz Roy Norte was one of the windiest I have experienced with flying stones making holes to tent fabric and fear of poles snapping. The following day we ran back to valley. Aguja Guillaumet would have been doable that day, but were too late to hike up to Paso Guillaumet.

Few days later we hiked to Niponino with rather heavy loads. Roar of the wind head of the Torre valley made even hiking look a bad idea. It wasn´t that awful but not pleasant either. That night 10cm of wet snow fell to Niponino making night´s approach to Col Standhardt harder. We climbed 1,5 pitches of Exocet before bailing. Sami was feeling cold and not super stoked about getting spindrifted in the chimney due to strong western wind. So I down climbed to the block and we rapped off. 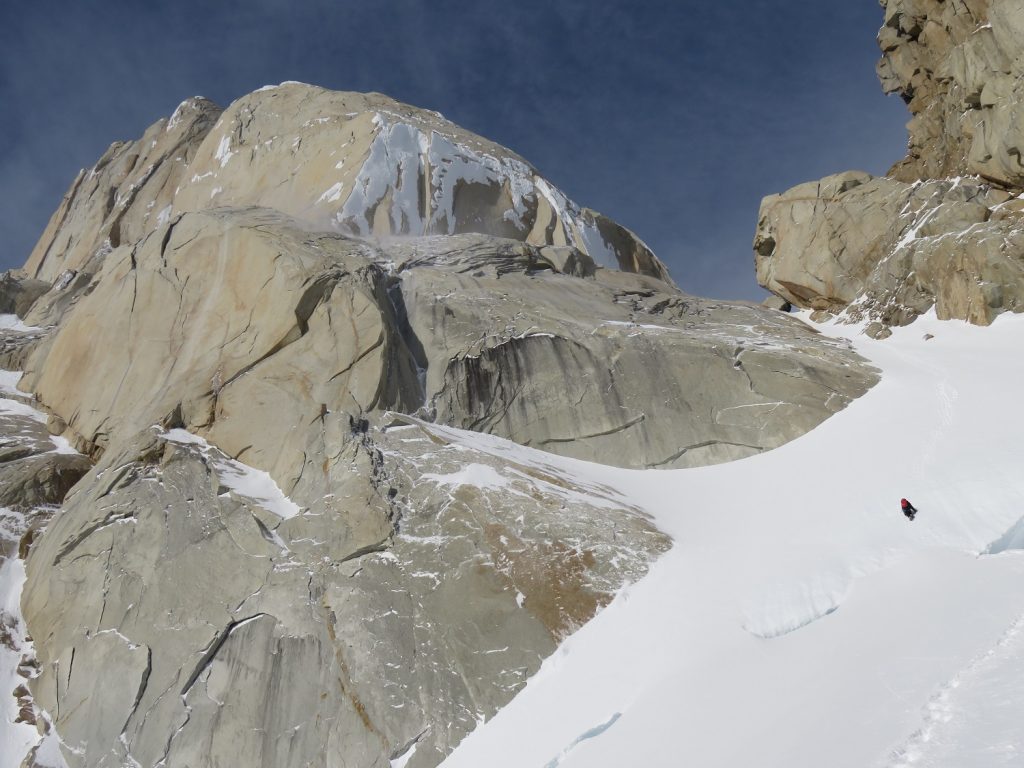 Sami down climbing off from Col Standhardt. 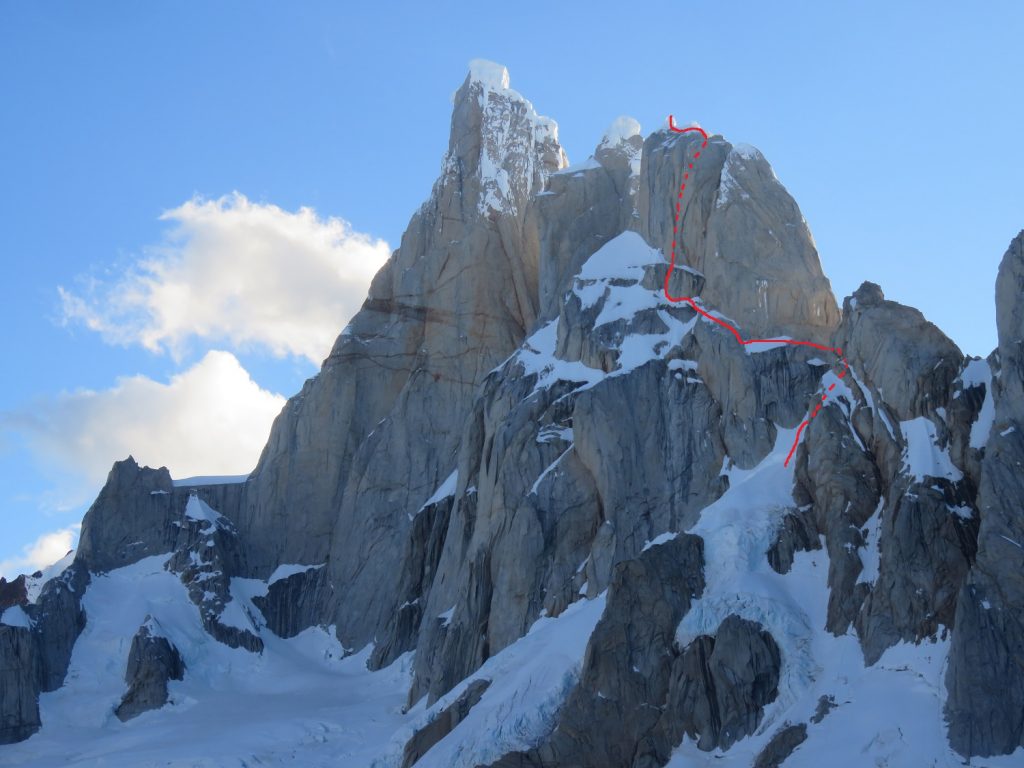 Line of the Exocet.

Aguja Standhardt`s world famous ice chimney is the easiest route to the summit of the easiest of the Torres. Bridwell did the first ascent in 1988 with his companions. Later on climb has gained popularity as  one the best alpine ice climbs in the world.

We managed to climb it in 1st of December in a brilliant weather window, which was almost too good to climb Exocet but after two bails we wanted to summit something before attempting bigger lines. Naive to think that window as good as that was would happen again during our trip. Now I know.

We hiked to Niponino day earlier and used afternoon bouldering and sorting gear. At midnight we climbed up to Col Standhardt in 3h and 40 min from Niponino. Sami led first slabby mixed pitches and easy snow traverses to the base of the first ice pitch. 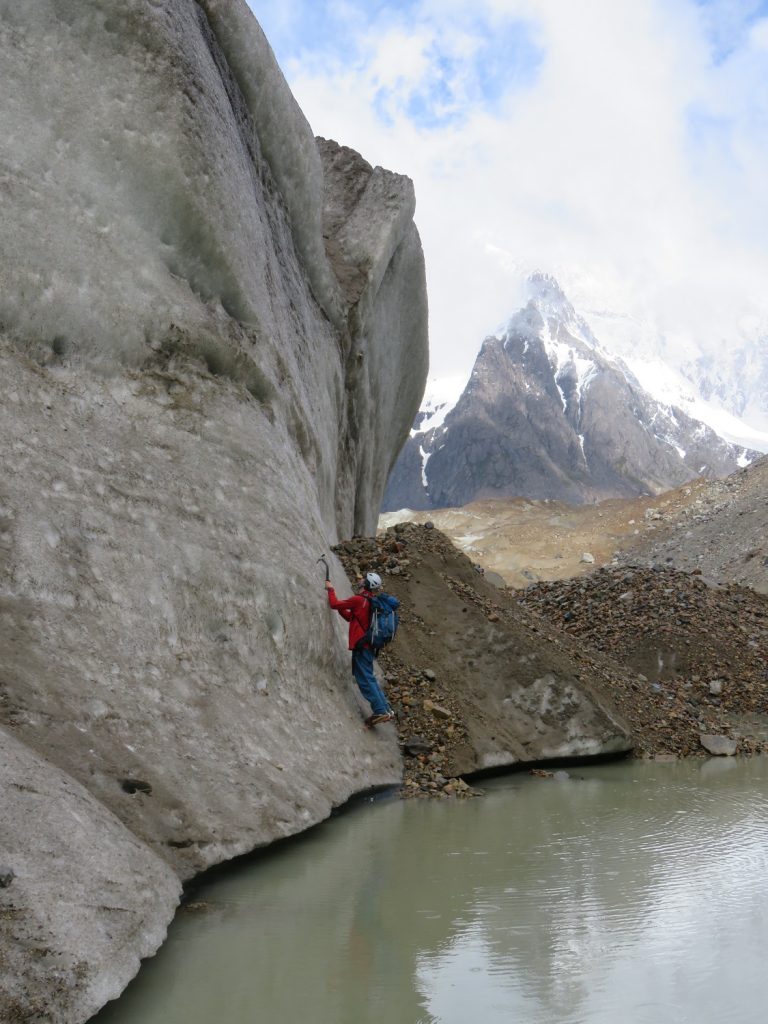 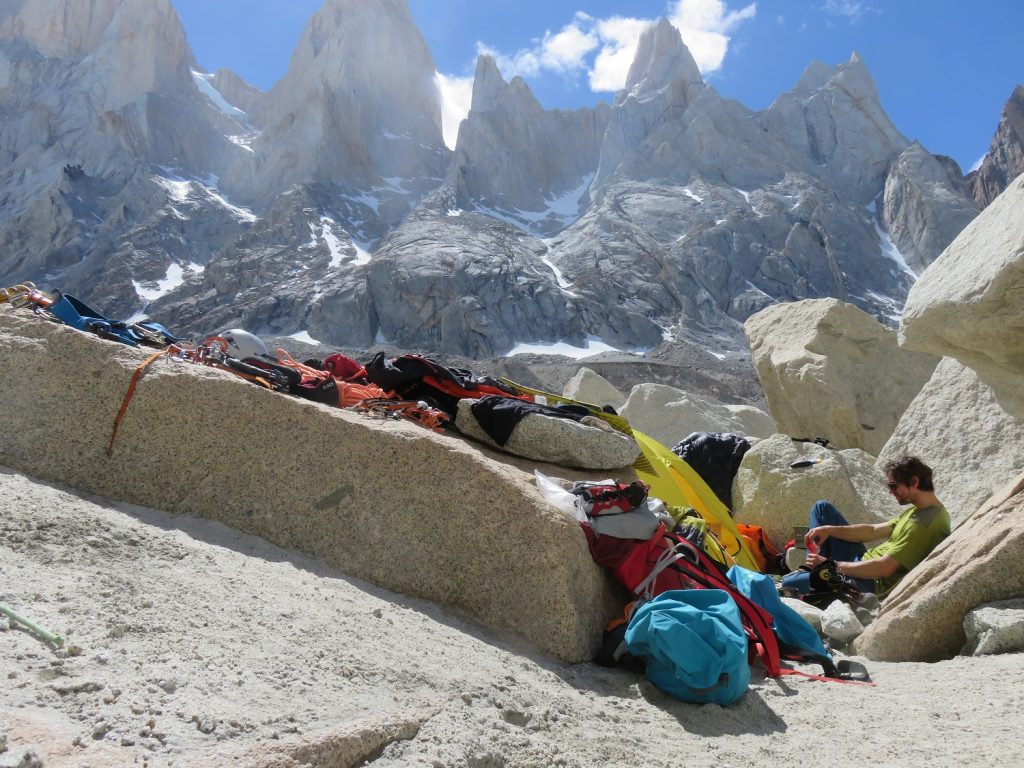 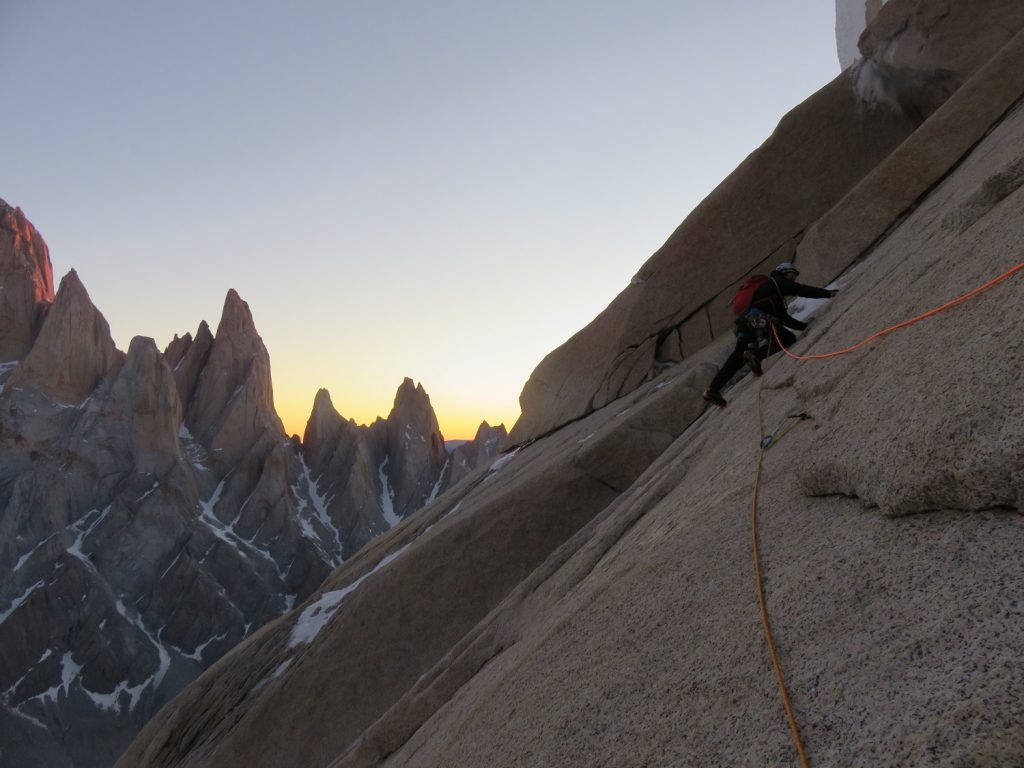 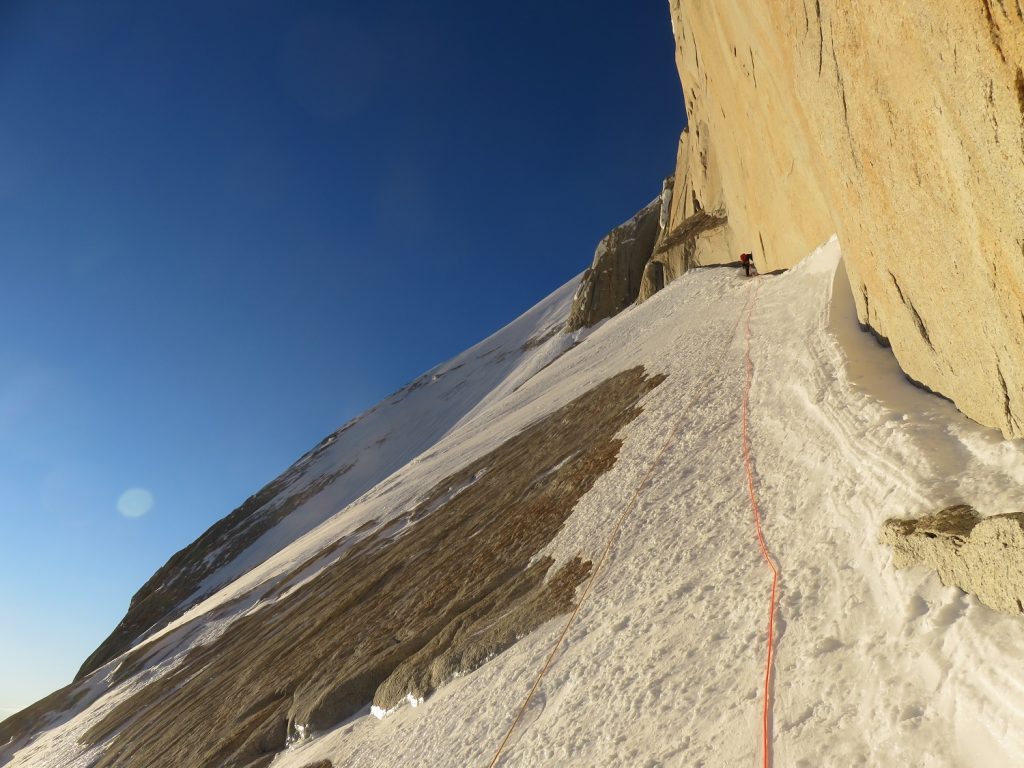 My lead block started here. First pitch was WI4 this year with already quite steep formations. During this pitch and first chimney pitch we had to wait very slow team from Argentina as they were climbing above us. It took three hours before they rapped off. By this time chimney started run with water. Day was cold and slightly cloudy luckily. I think pitches went this time like WI4+, WI5+, WI5 and WI4 with a stiff grading. All in all it was steeper than I expected and as a first ice climb of the season – a bit pumpy. 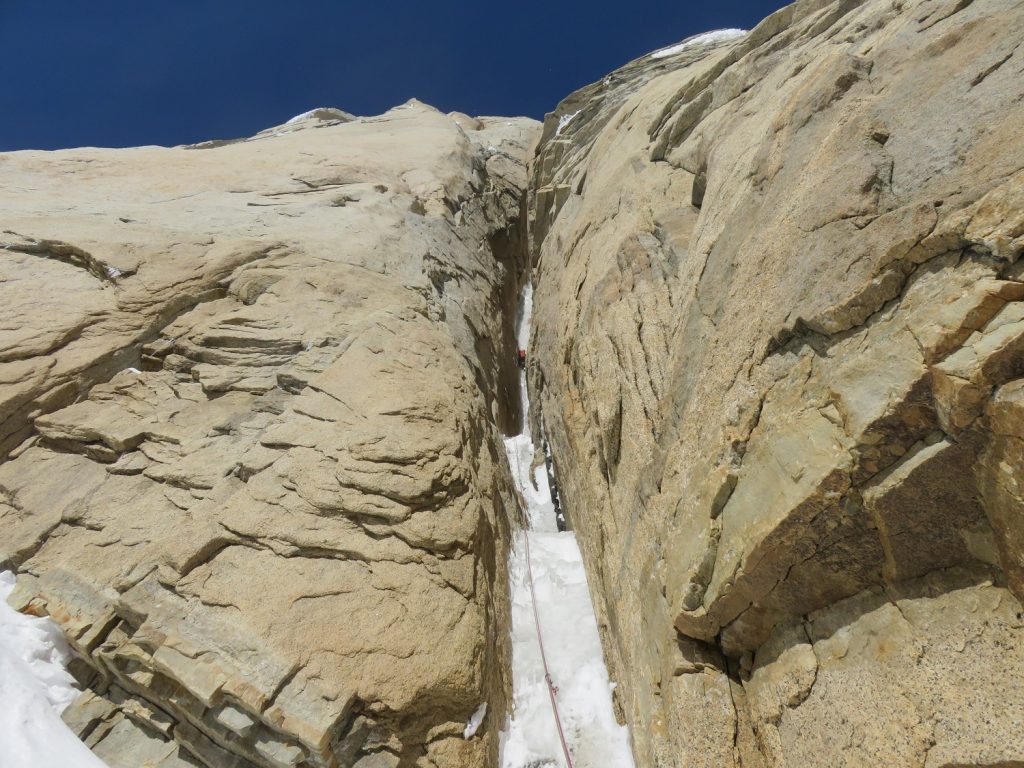 Team Argentina in the chimney. 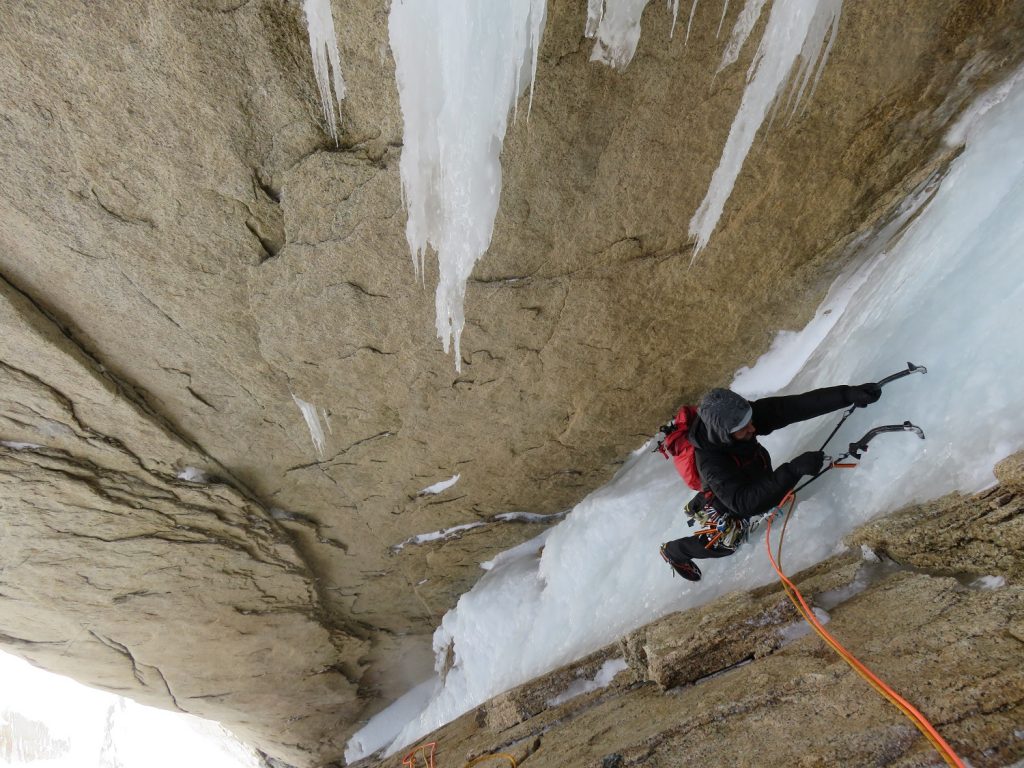 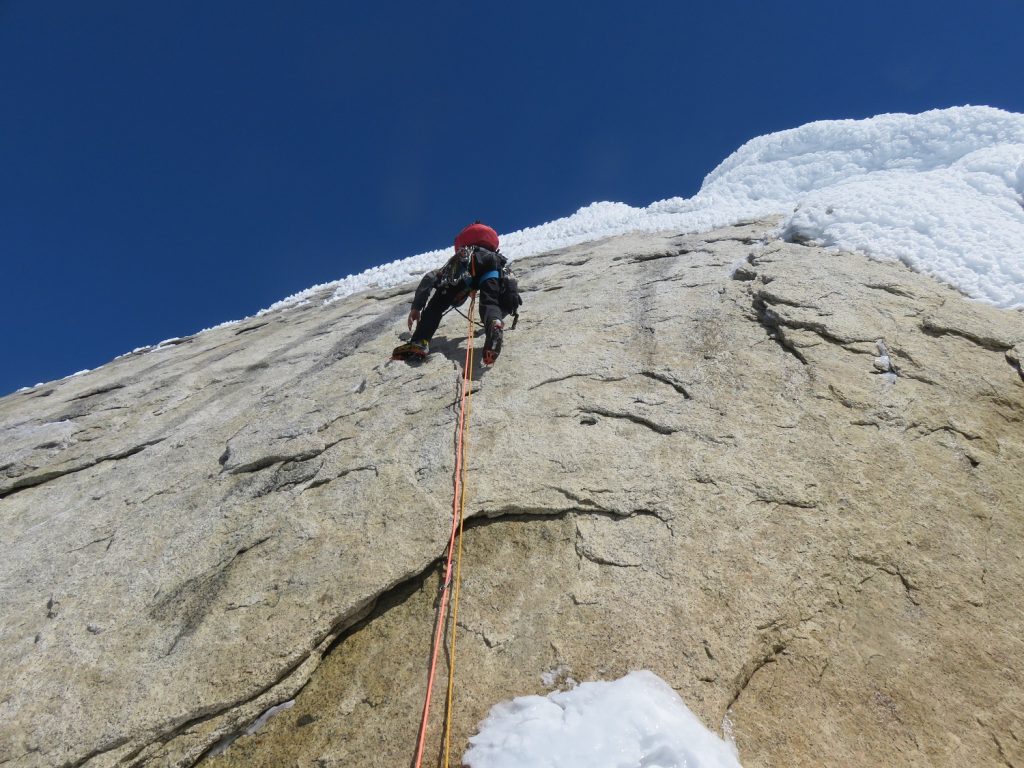 Slab leading to the summit slopes.

At col sun dried our wet clothes quickly. Easy slab and snow field led to base of the summit mushroom which Sami climbed easily to the top. Views were superb!

Rapping down and hike back to Niponino went easily and by the time it was getting dark again we reached our camp. Probably the most fun day of alpine climbing ever! We would have been hours faster without waiting but in that case, day would have been too perfect. 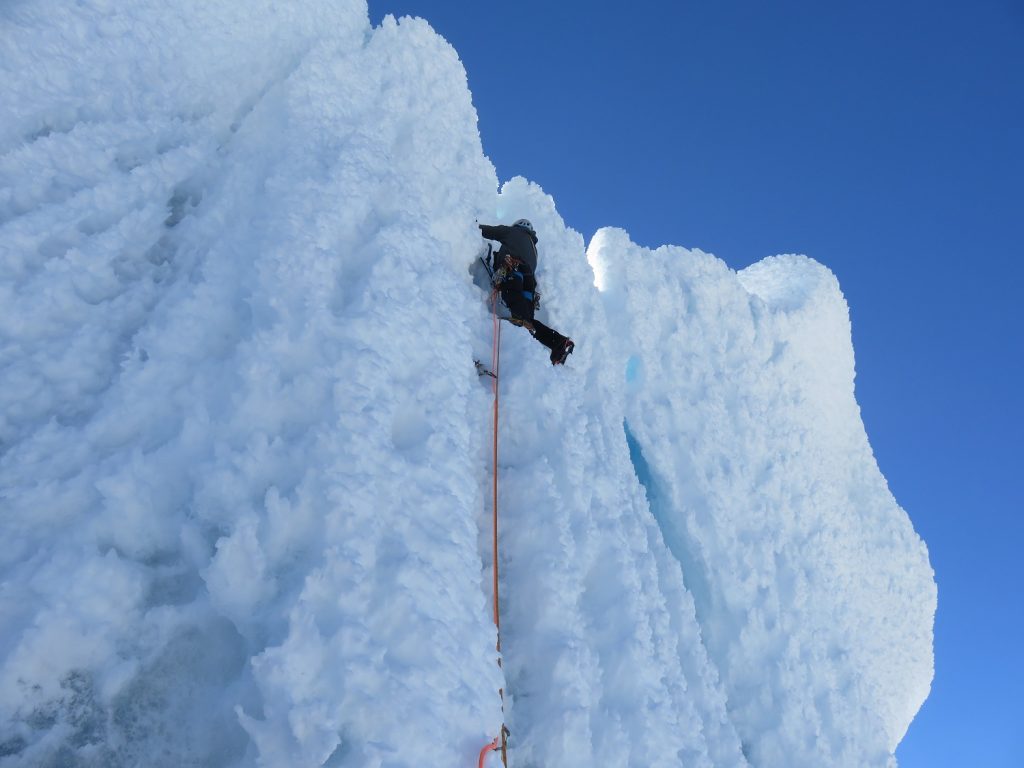 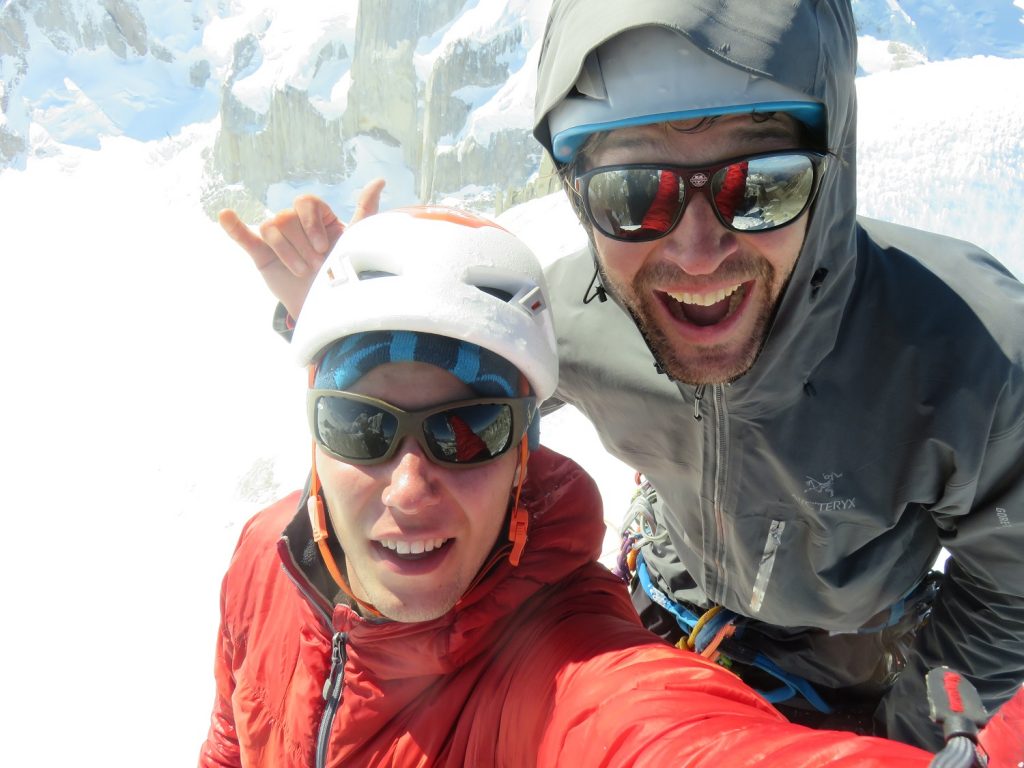 On the summit of Aguja Standhardt. 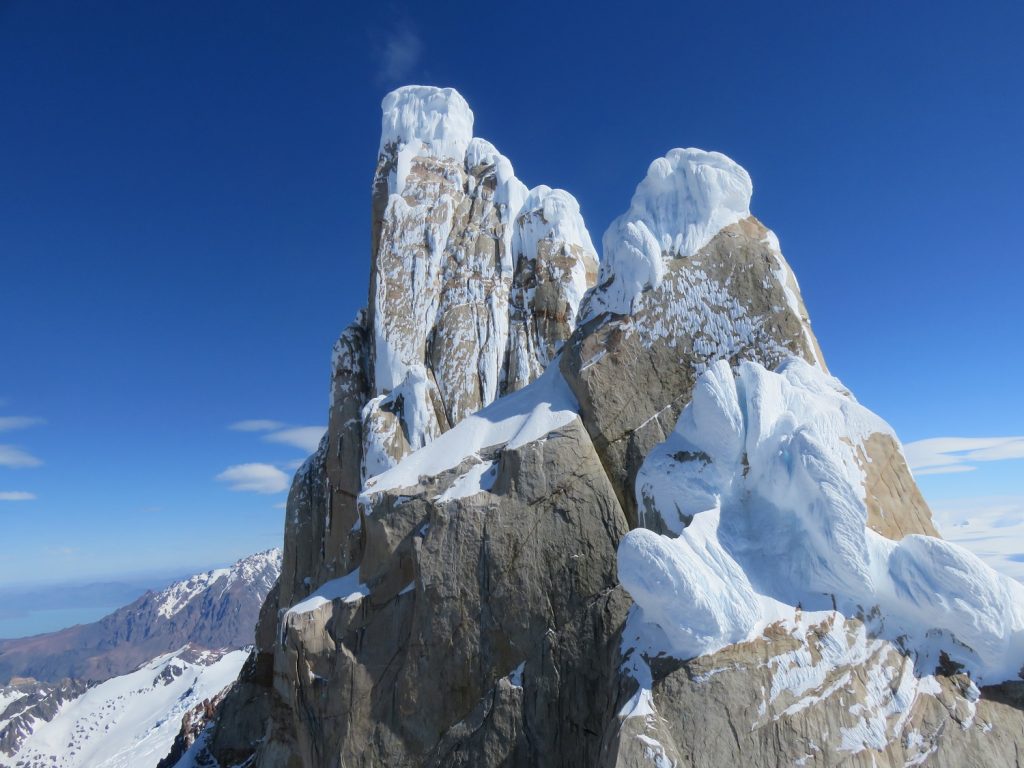 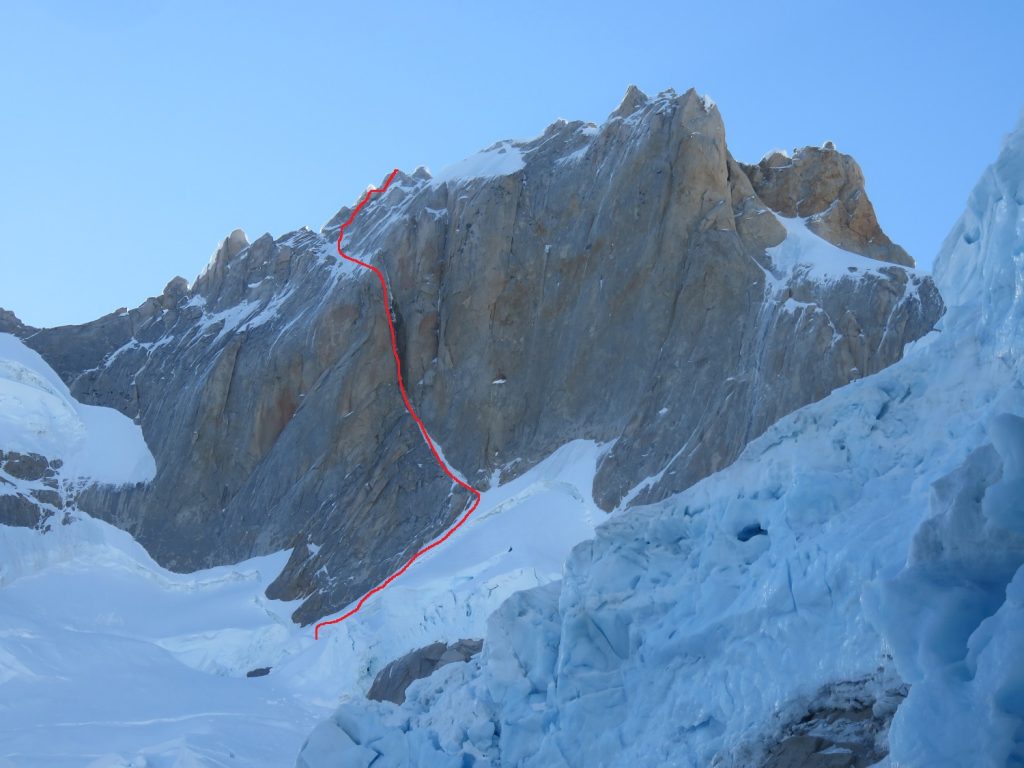 One day weather window happened on 12th of December. Hike in the day before was rainy and full of bad luck as wind destroyed Sami´s sunglasses forcing him to hike back to El Chalten. I teamed up with Canadian Quentin Roberts at Niponino as we thought climbing together would be better than soloing on our own.

At 5am we started walking to the base of Cerro Piergiorgio. Dry glacier and Boquette de Piergiorgio´s icefall went fast as actually whole approach. Snow was rock hard and we cruised past of the many seracs that hang above the approach. 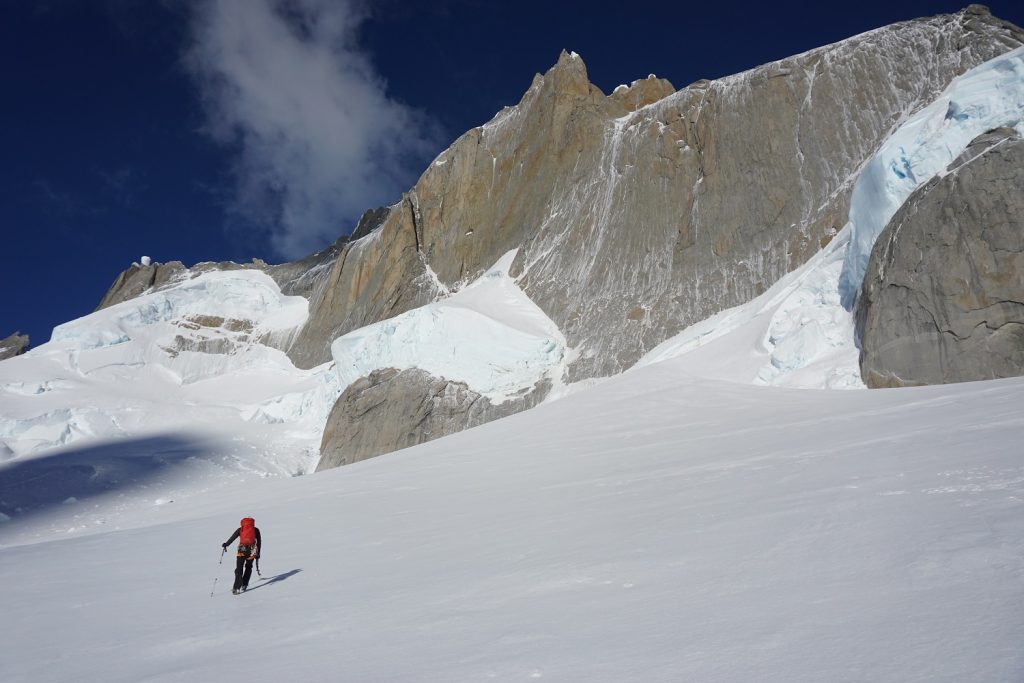 Speedy approach to the base of the wall.

We simul soloed to the base of the first proper pitch which I climbed as 50m M5. Chamonix style mixed! Quentin freed the next aid pitch by climbing a chimney on the left(35m, M6 R/X). We left three pitons which is unfortunate as the line is already full of ugly pins. Probably due to my inexperince to hack them off. But actually now free variation is more enjoyable as you can clip the pins. Quentin also led the third and last of the chimney freed by Sim and Griffith in 2010 as M7. Now it was max M6 but conditions make diffirence. 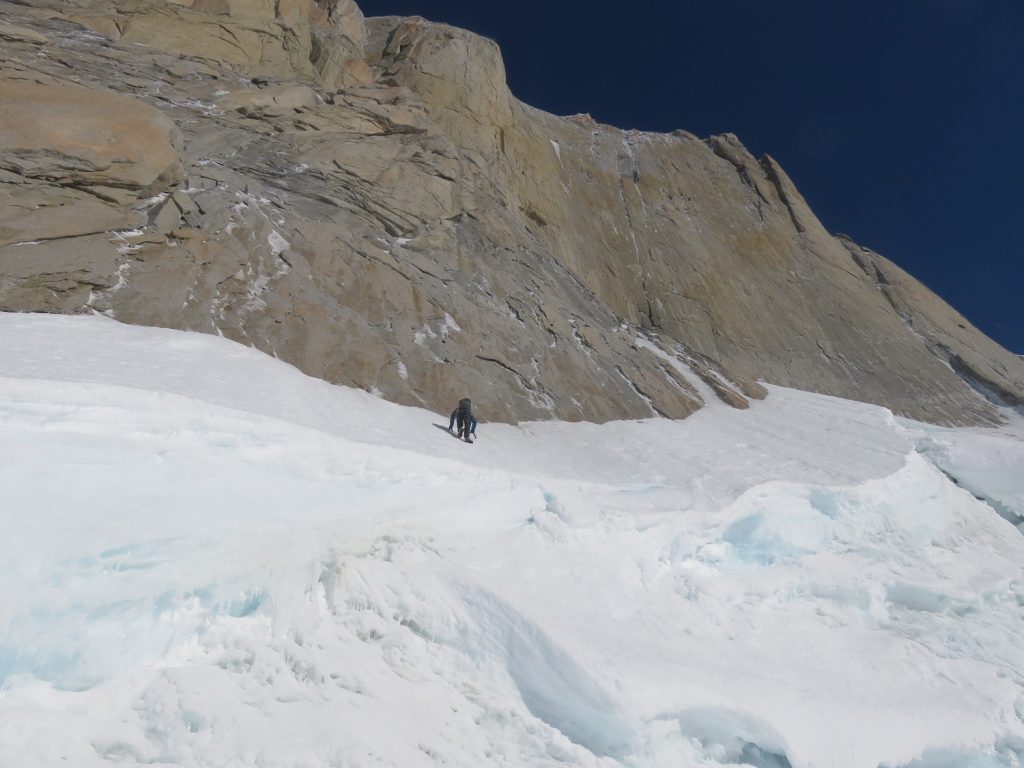 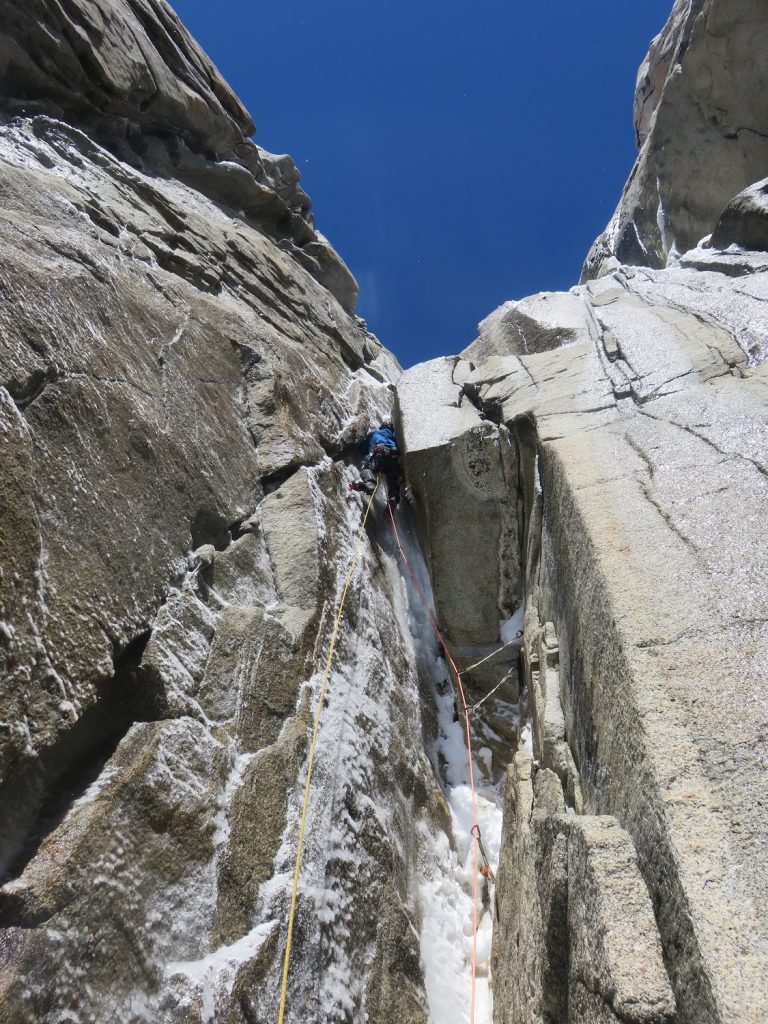 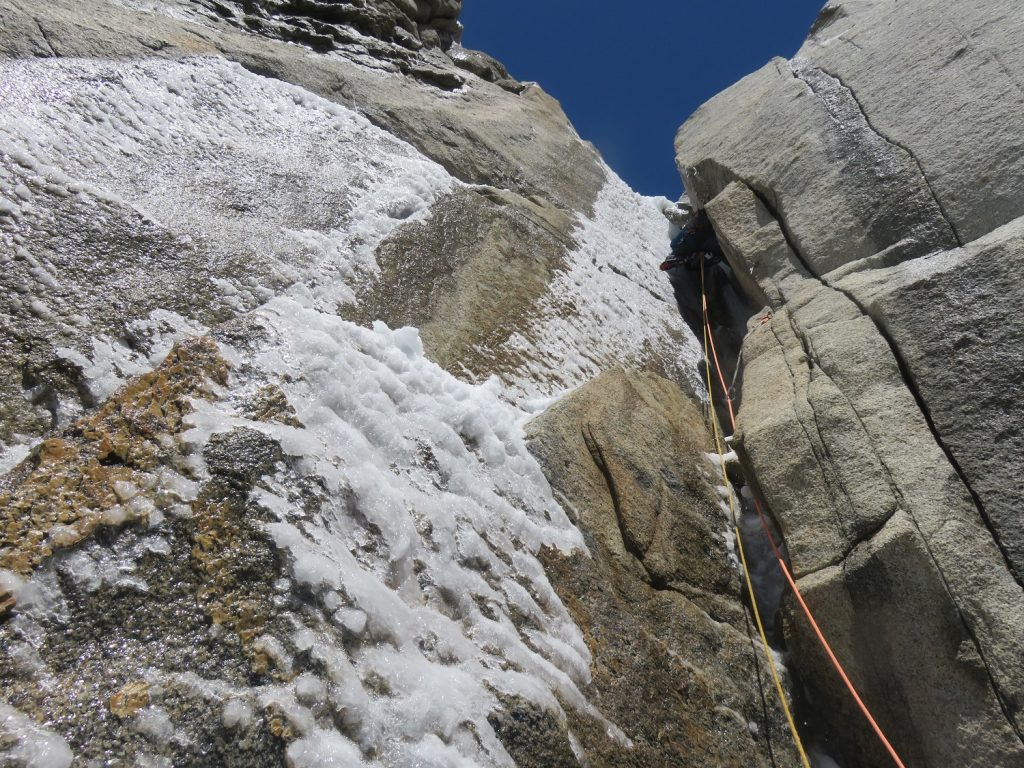 We simul climbed an ice ramp and did one mixed pitch to the ridge. Short rappel led to the summit chimney which I climbed with some cursing. We would have been able to avoid the rappel by climbing ice smears straight under the summit!! 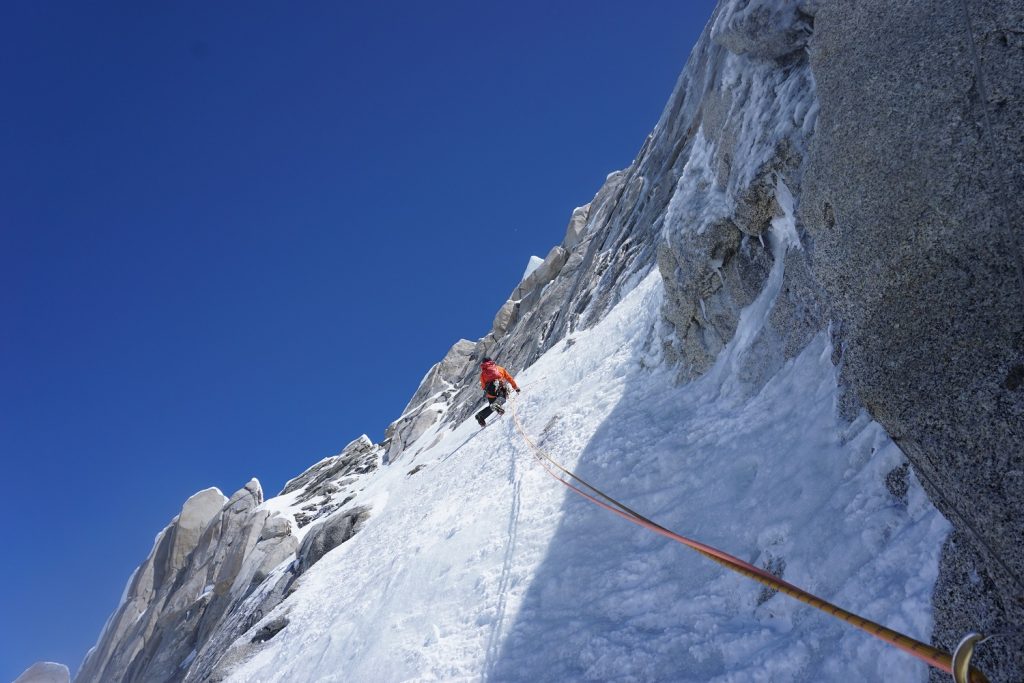 Colin Haley and Rolando Garibotti did first ascent of the peak in 2014. This was only second ascent of the peak which is crazy! One of the main peaks of the massif. We rapped off from a #1 cam due to lack of ice and other features. Rest of the descent back to Niponino went without problems. Return trip took a bit more than 17 hours. Not bad. 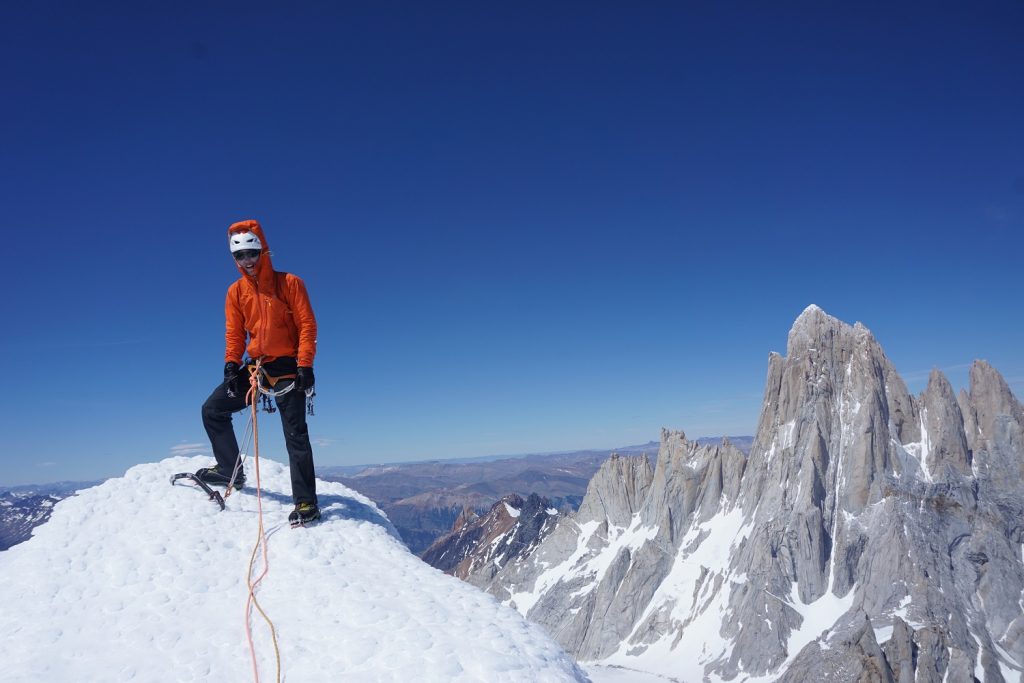 On the summit of Cerro Piergiorgio. 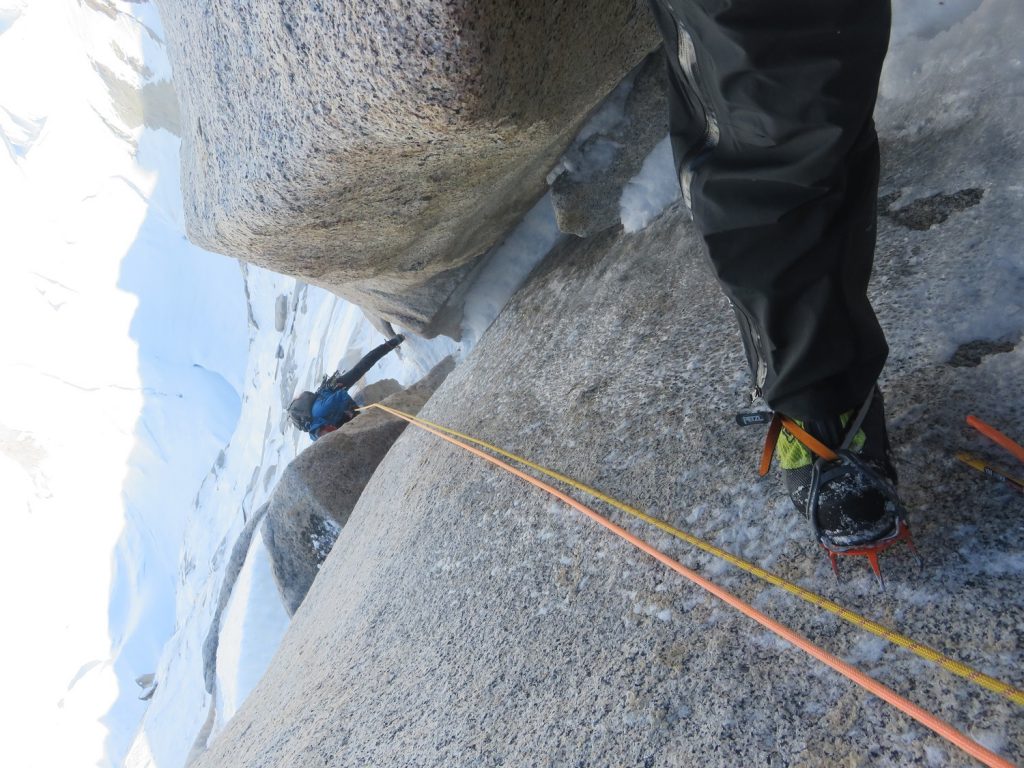 Expensive rappel off the summit.

Line is a good option when winds come from N or NW! Enjoyable mixed!