In the first part of August I teamed up with a Swedish climber Oscar Krumlinde for a few days. We had a few bigger ideas but as Oscar`s foot doesn´t really like rock climbing at the moment, so it would be wise to climb something with big boots. Not so easy if you want to go big in the Mont Blanc massif as most of the big summer routes I haven´t done yet require hard free climbing.

Weather was supposed to be stellar, so traverse of the Aiguilles de Chamonix came up as a best idea. Doing it the normal way (Midi-Blaitiere) would have been too easy and not interesting at all, so we decided to try it as reverse which makes actually more sense. Climbing is going up, not down right?

So, we would start from Aiguille de I´M, traverse Petit Charmoz, climb the NW ridge of Grand Charmoz, do Charmoz-Grepon traverse, climb up the rocks next to Spencer couloir and then continue via the classic Aiguilles traverse but in reverse to the Aiguille du Midi – traversing the whole skyline of the Aiguilles above the Chamonix valley. David Lama did it in 18 hours, so how hard can it be?

It snowed two days straight before our departure, but as often in summer, we thought that snow would melt fast during the first day. We took a lazy 8:00am start from Plan de Aiguille cause of that. Walked to the base of NNE spur of Aiguille de I´M and started climbing around 9:30. 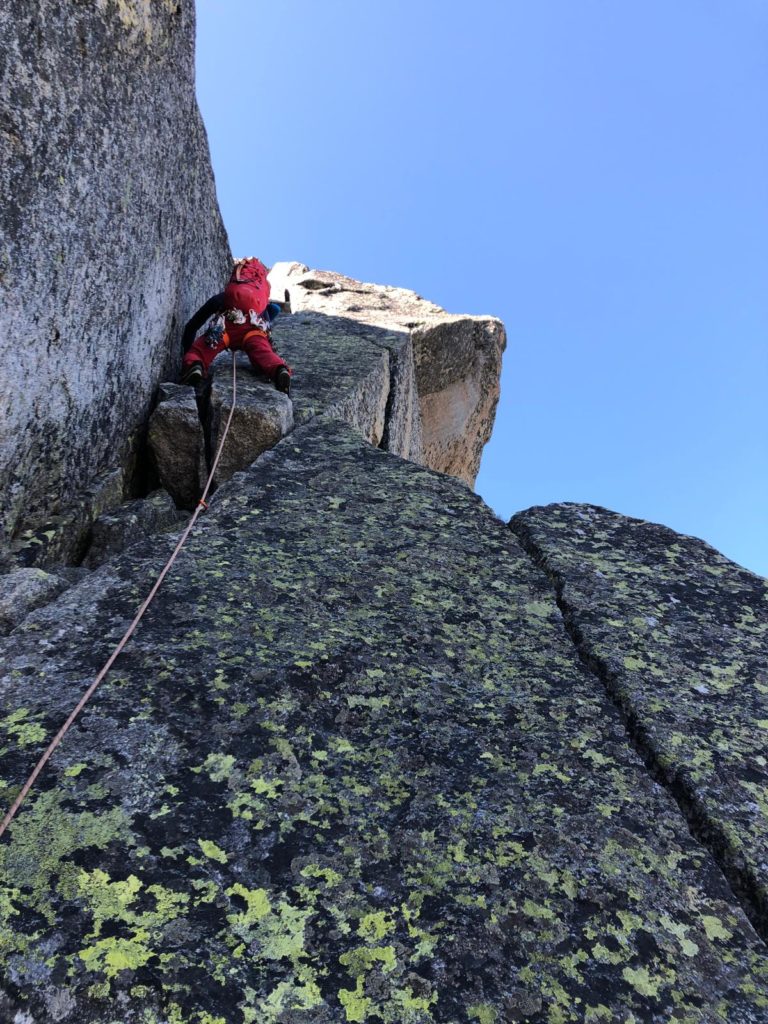 NNE spur is a old school classic in Chamonix.

As we were lazy, there were already two teams front of us on the NNE spur. We took it easy and just followed on the line on a quite polished route. At least crux (5b) pitches were really slippery with big boots.

I´M was followed by a quick traverse of Petit Charmoz which wasn`t that special. We skipped the summit and continued pass the Doig de Ettala for the first grade four sections of the NW ridge of Grand Charmoz.

Snow started to appear on the ridge. Soon we had 20cm of it on ledges and slabs. Once on the northern side of the Charmoz it really slowed us down. 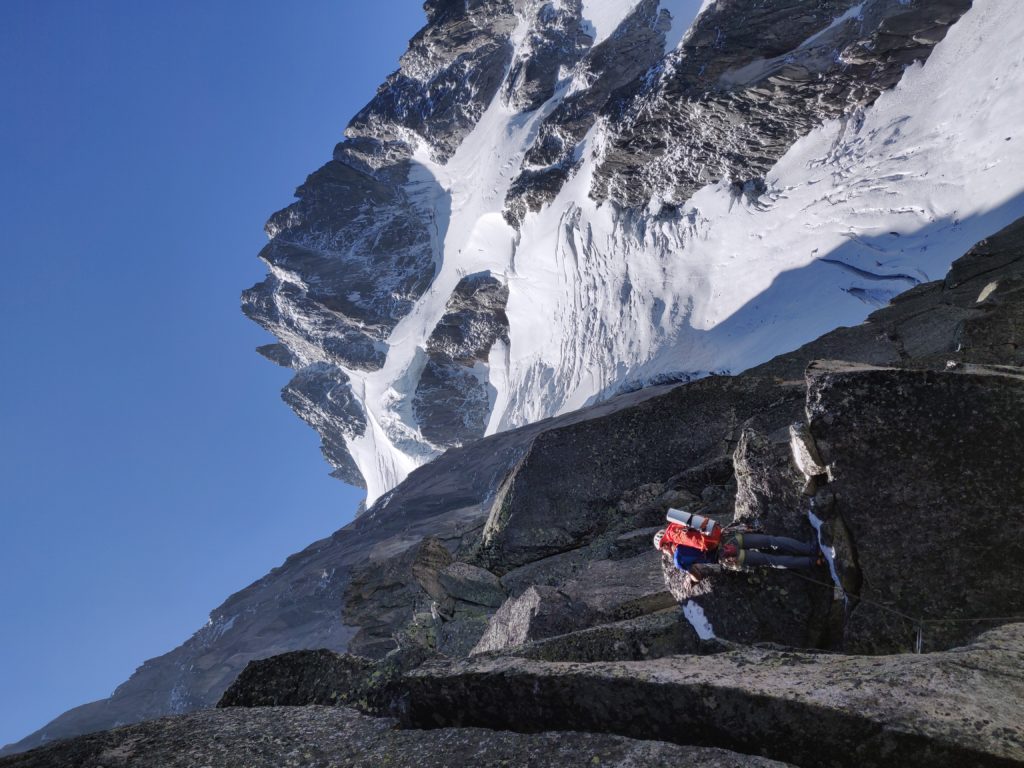 NW ridge was first climbed in 1950 by Pierre Allain and co and I have to admit that I didn`t expect climbing to be tricky at all. I had just soloed the Peuterey Integral a week before, which begins with S ridge of Aiguille Noire de Peuterey and is full of grade five steps. I had climbed that with ease, never even hauling my back afterwards. But now, on Charmoz, even the first 5b put us back on the track. I would say every pitch was graded like in bouldering, so moves felt a lot harder. Still a 6a boulder shouldn´t be a problem, but add snow and icy cracks and big boots and soon it becomes a big effort to get up even pulling from cams. 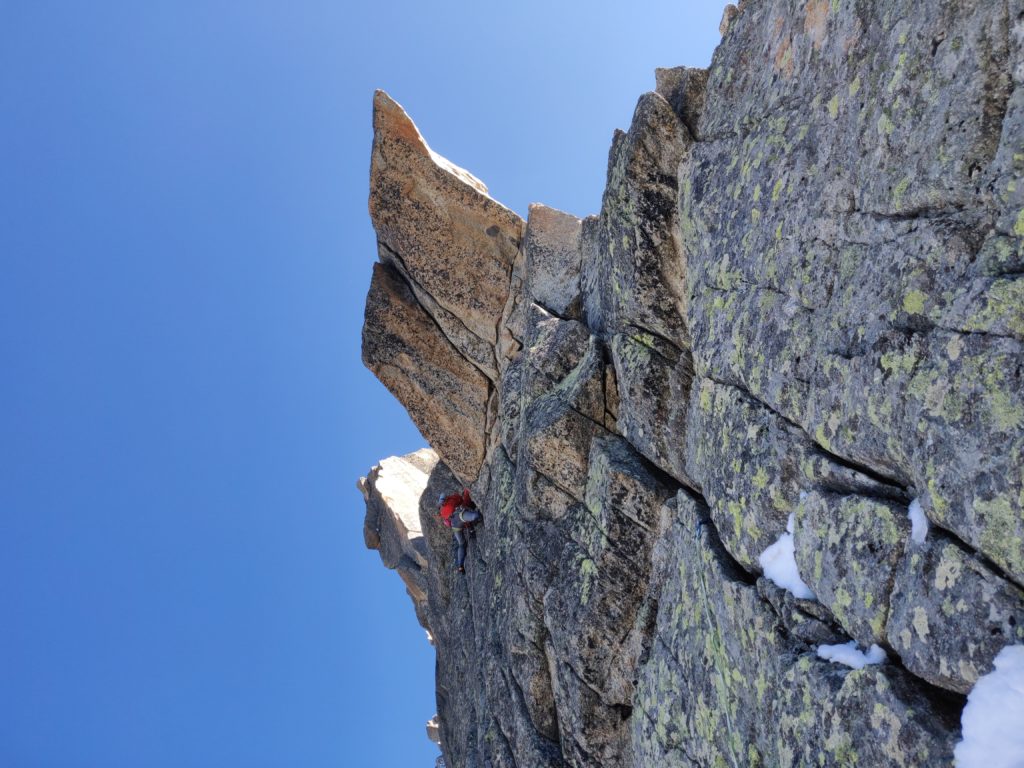 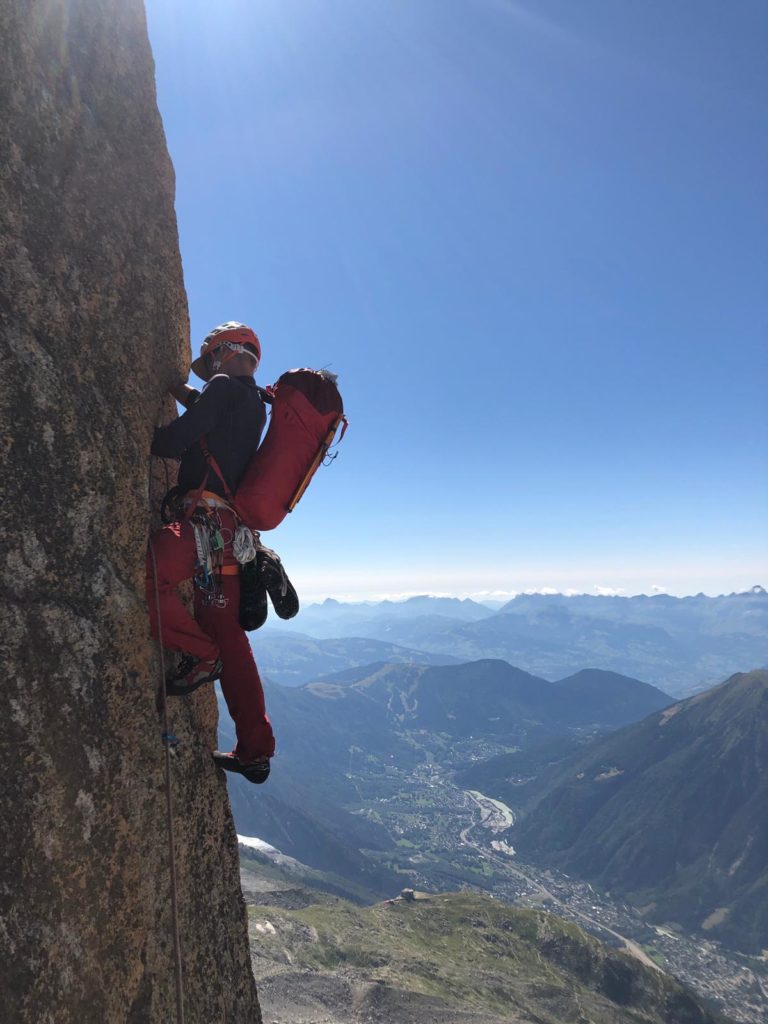 First 5b on the route. Rock shoes went back to pack quicly after this. Too much snow.

I should also mention two pendulums. The first one is avoidable with a 5b slab but the second one is a super airy and little bit sketchy, 10m pendulum around a corner. Allain went for the full send for sure in 1950!!

Before the last two 6a slab pitches to the summit of Charmoz we found a perfect bivy ledge. It was just 19:00, which would mean two hours of light left, but we took the ledge. We would be able to dry our socks in a sunset, take it easy, and wait for snow to melt a bit more for the coming days. Plan was to make it to the Grepon on a first day, but it wouldn´t happen in two hours. 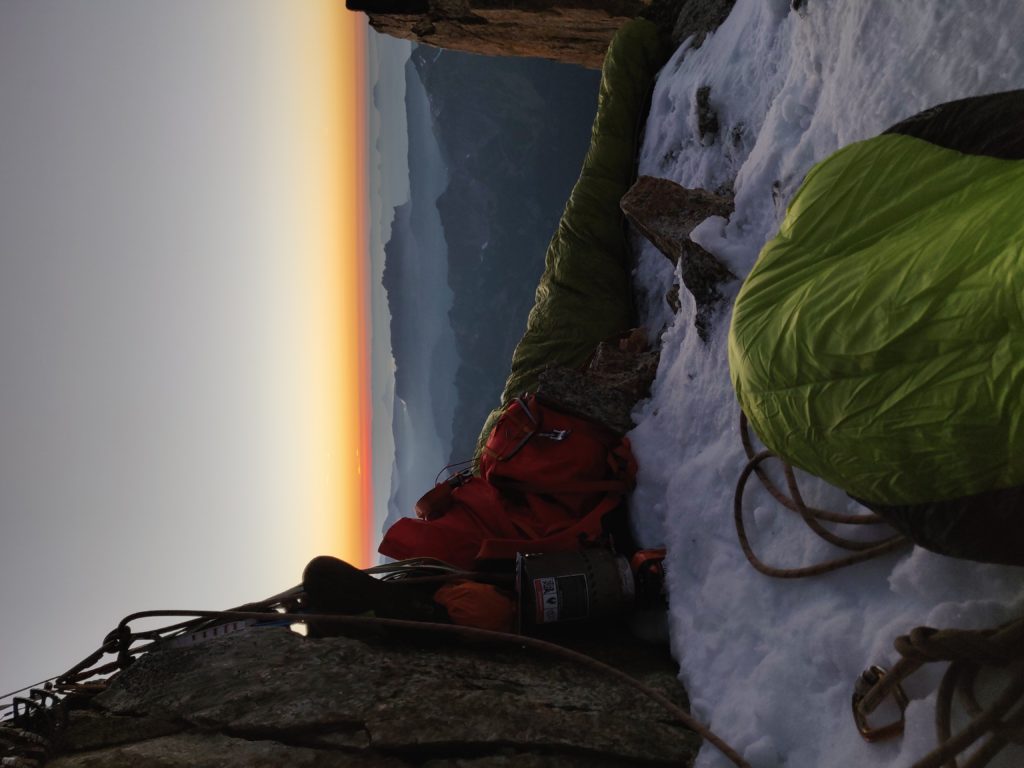 I fixed the rope for the first 6a slab before dinner. Then we had a stunning birthday evening above the clouds and Chamonix valley. The best bivy I have done!

The following morning we jugged up and climbed a 6a+ death slab which was protected with fixed rurp?? and some shaky pitons. How in Earth they did that in 1950?

Soon after we joined the classic Charmoz-Grepon traverse until we managed to rap accidently to the Charmoz-Grepon couloir. Too many raps meant 200m of mixed climbing getting back to the ridge. Very annoying and a major route finding error. 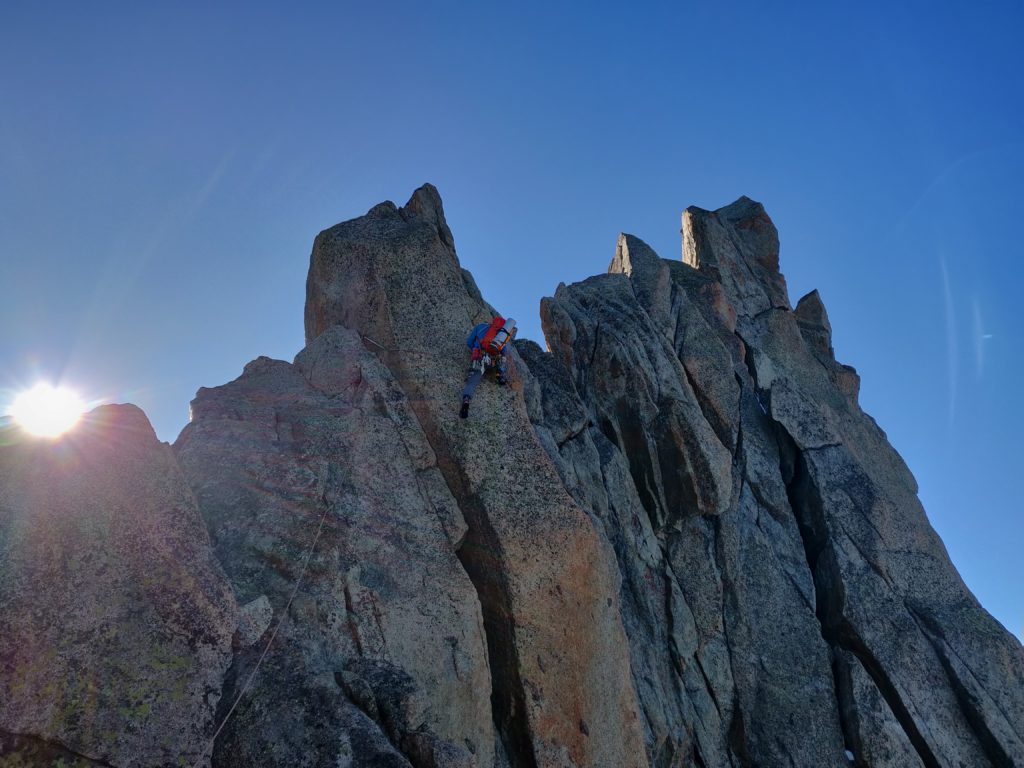 Anyway climbing was snowy, old school and rough. Scenery was spectacular while traversing exposed granite needles, but I wasn`t sure if the climbing itself was quality. Probably not. At least it was odd. 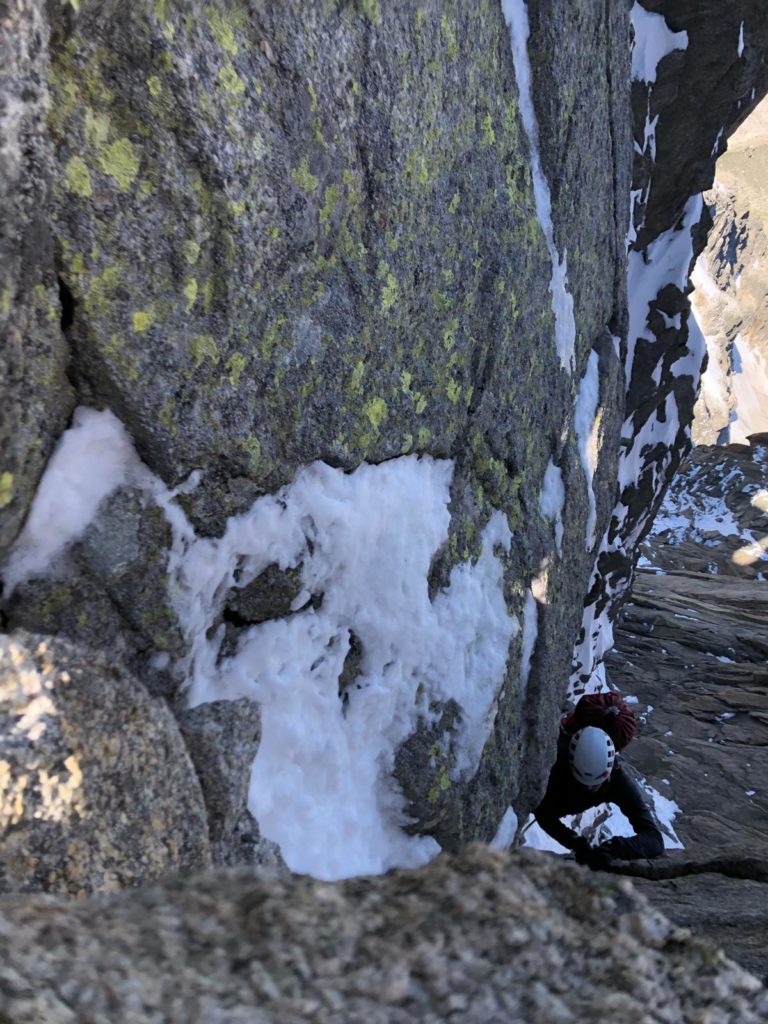 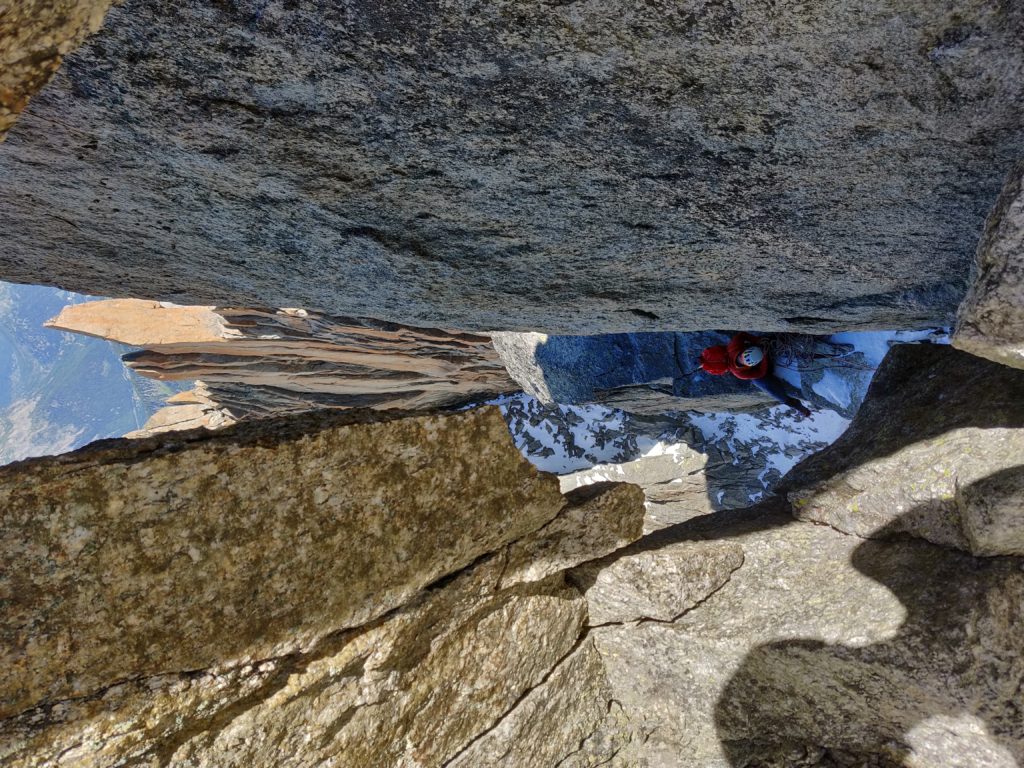 Canon hole or letterbor or something like that. The whole ridge was named.

We summited the Grepon and started rappelling and down climbing the Col des Nantillons. We had found core shot middle of our single half rope a few hours earlier and it did get worse under the usage. That and the amount of snow still on the rocks guided us quite quickly the direction of Plan de Aiguille and Chamonix. It wouldn´t be fun and not even safe to continue with a broken rope, so going down was kind of a only option. 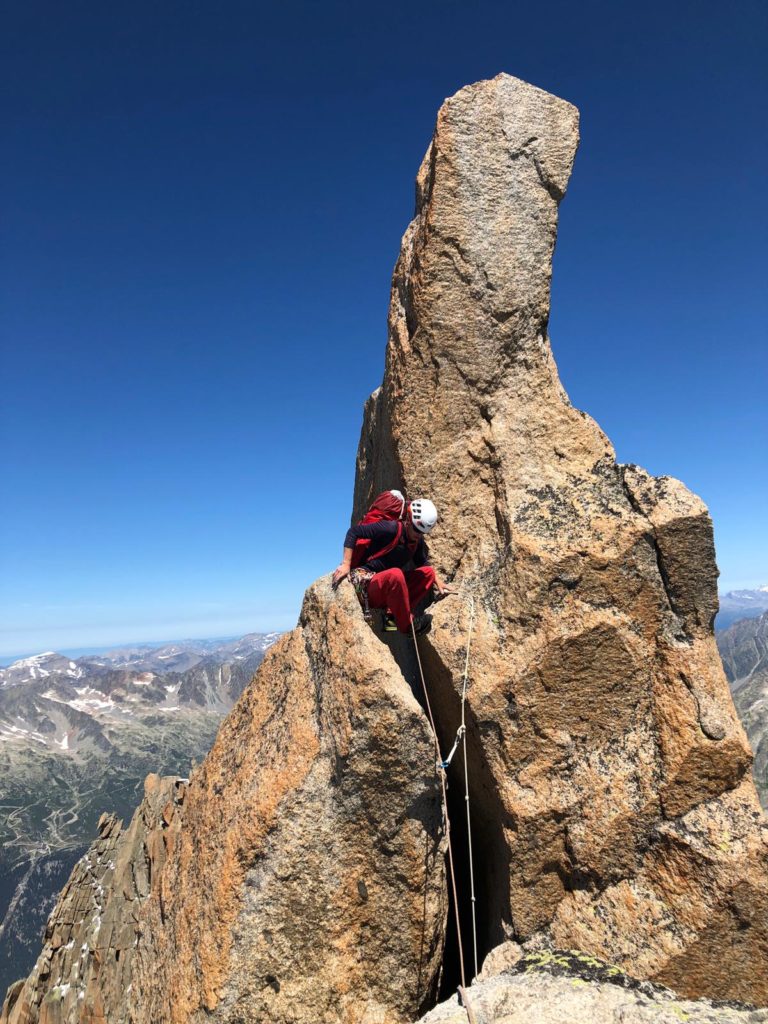 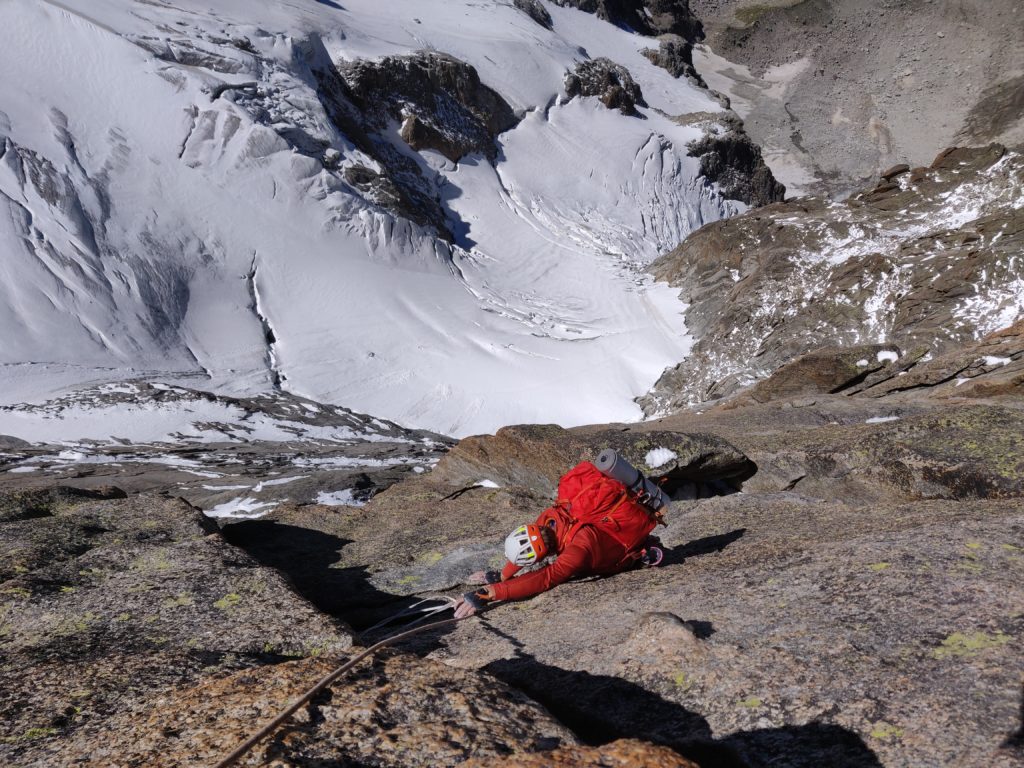 Oscar on the last moves to the summit of Grepon. 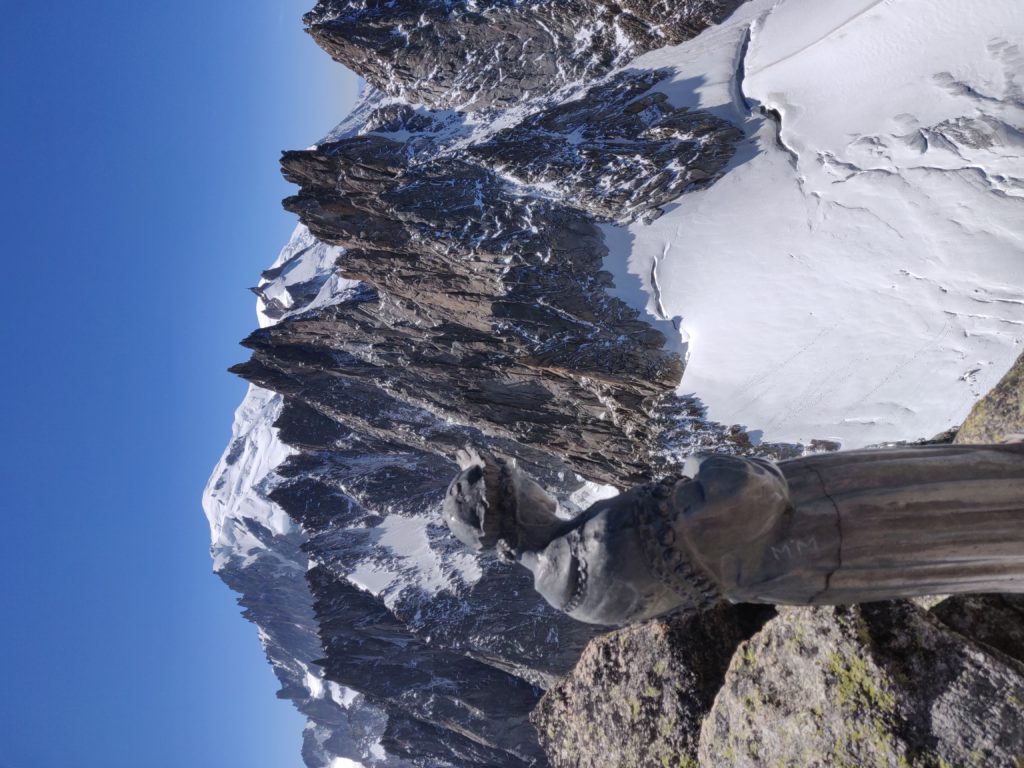 Nantillons glacier was in doable condition but with a lot of slushy snow. Coming down from the col didn´t take that much time and soon were in a lift back to Chamonix center.

A fun little adventure, but I´d recommend it in dry conditions for the maximum fun!